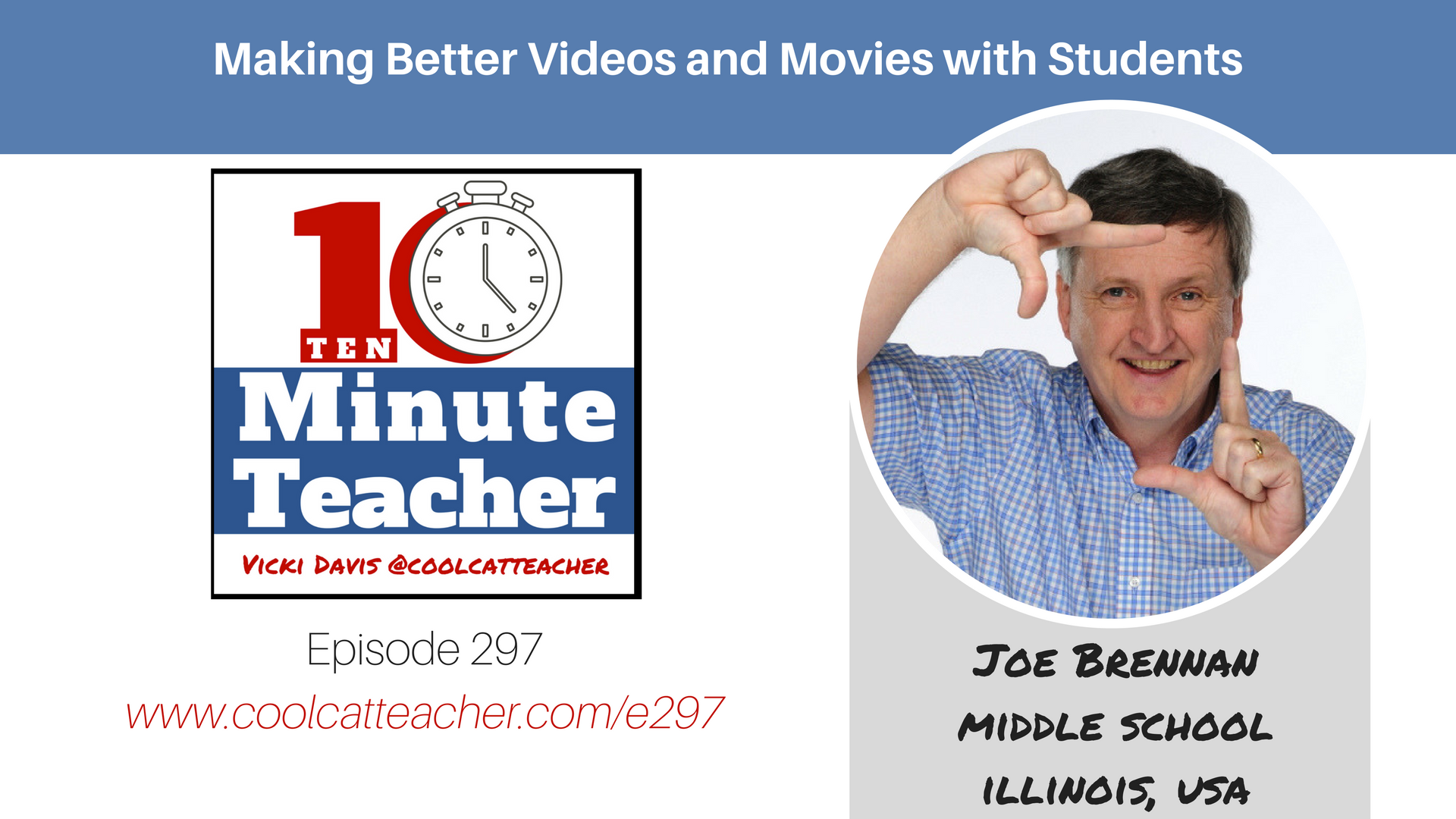 Digital filmmaking can successfully be integrated into any class. Learn practical tips and ideas from Joe Brennan for making movies in the classroom. 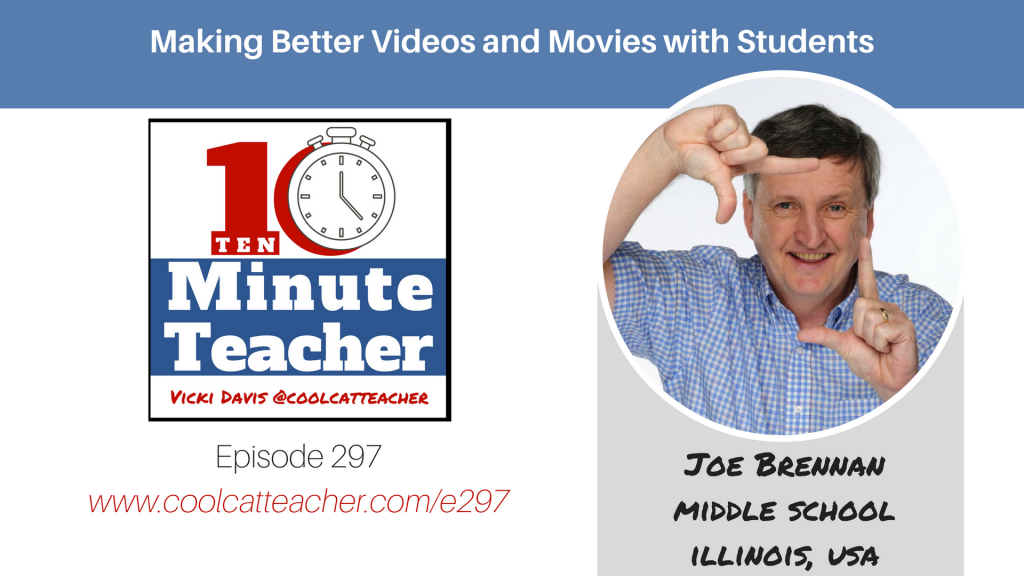 Today we’re talking with an expert on the subject, Joe Brennan Creativity and Innovation Specialist. He is in Illinois.

Joe, where do we start, making videos with kids?

Where do you start?

Joe: Anywhere you want to.

I’m a big proponent of using it in any classroom, with any subject.

I teach a graduate class, and I challenge my teachers to do it, regardless of what they teach. The math teachers, the science teachers, the PE teachers complain that it just wouldn’t work in their discipline. After a couple of weeks they figure out, it can!

Vicki: Give me an example.

What would be an example of a video you’ve seen in math or in history?

Give us an example of a video in an unlikely subject

Joe: One of my favorite ones in math that a teacher did was the division sign as Eeyore. It starts out with lonely division sign perched on a chair, I guess.

And it says, [delivered in an Eeyore voice] “Nobody likes me. Every time a teacher says we’re going to divide, there’s a groan in the room.”

Joe: Then he kind of becomes the division sign, and describes what you have to do when you divide, and how it’s the opposite of multiplication and things like that. It just kind of puts a human voice (not necessarily a face) on it. But he talks about the application.

So that was, I think, a fourth grade or fifth-grade math teacher.

Vicki: Think about it. I make videos in my classroom and digital film and… you know.

You want to have a purpose, though. So how does a teacher start off finding a purpose, and then helping their kids plan out their video?

How does a teacher begin to structure the purpose and the plan?

It depends on what class it is.

I go right back to the writing process with this. Whichever model your school uses to teach kids how to write, I always boil it down to the “Tell ‘ems” method.

Tell ‘em what you told them.

You’ve got the introduction, body, and the conclusion sort of thing.

But you can do that visually, and it’s much more memorable for the kids when they kind of see it and hear it at the same time.

I downplay using music. It can really be a crutch. We don’t want to make music videos.

Vicki: Joe, take us through an example of how you’ve coached a teacher recently through this process of making videos with their class, and the objectives that you covered.

Give us an example of how you coached some video projects

Joe: We try to employ PBL tactics, whether we’re 100% PBL or not is up for discussion.

They made videos on disaster preparedness — tornadoes, earthquakes, floods, you name it.

My favorite ones are the ones where the kids kind of do a newscast. They’re at a desk like you see on the nightly news, and then they go to a reporter on the street.

The use a little green screen.

Then they talk about what people have in their preparedness kit.

I forget what else they pick up from the novel, but they employ all those things.

I guess there’s a little aspect of a book report in there. There’s a big aspect of current events, and kids making an argument, presenting themselves, public speaking.

Vicki: So, they’ve decided their topic.

How do you help them get ready to shoot?

Are you big on scripting? Storyboarding? How do you help them get ready to shoot?

Joe: The quickest, easiest thing to do is shoot and edit on the computer, iPad, whatever your device is going to be.

The big thing is preparing.

So it’s a pay me now, pay me later, or pay me much later sort of a thing.

Of course, you can edit things in post [production.]

But the more you can line up ahead of time, the more you know what’s coming, and what each team member’s part is going to be.

Kids take turns behind the camera or in front of the camera. Or they’re on the side doing some sort of coaching or moving props in.

But definitely, you want a storyboard. You want a script. Keep those separate.

You can almost simply that using the story spine sort of thing, “Once upon a time… Something happened… Because of that…. Then that…” And eventually, you come to the conclusion.

Vicki: You know, the scripting and the storyboarding is something the students really — I know in my classroom — they’ll fight me on it!. But it just HAS to be there. Otherwise, you just end up with a mess.

I don’t know why kids think that they’re just going to go to the next viral YouTube video.

Kids think they can just point and shoot without a plan

And it just doesn’t work that way, does it, Joe?

Joe: If you didn’t have an outline or do a first draft before you put pen to paper, or started typing… it shows.

Vicki: It does. It just turns into a mess!

I think it’s just when we start with video — and I made that mistake early on — I guess it’s kind of ignorance, in some ways. We just don’t know better. Once you know better, you guide your kids through the scripting, through the storyboarding, or use Jason Ohler’s storymap idea.

And then what do your students shoot on? My students shoot on — I have a Gimble, and they put their phones in it, and we usually rip off of their iPhones or their Droids and we pull it into something called Pinnacle Studio.

So what do you use with kids?

We use iPads and iMovie.

Vicki: Awesome! And iMovie is incredible.

So actually shooting on the iPad, and then pulling it right into iMovie, huh?

Joe: Right, and they also have the Do Ink green screen program.

Vicki: Ohhhh! So where’s your green screen at your school?

Joe: Anywhere we want it to be.

Vicki: So is it moveable?

Joe: This was such a big hit with our five language arts teachers that they got their own green screen. I have a portable one I lend out from my center. I also have two green walls in my studio technology office area. They can shoot anywhere.

One of my favorite pictures is — we have an open balcony area, and we’ve got three green screens set up — and kids are using both sides of them at the same time.

Vicki: Wow! Well, how’s that for audio, though, huh?

Joe: They have also learned the trick that you don’t have to get the dialogue. You can do a great job with narration. Tell the first person’s story, and your character could be in the picture which your voice is coming sort of in retrospect.

If you watch young Sheldon, I kind of like the way the old Sheldon talks about what Sheldon is going on in the show.

Vicki: Yeah. When you do have actors and you do have audio, that tends to be the most difficult piece of what I do with my students, is capturing that audio. We actually invested in a road microphone set which is pretty expensive to be able to capture that. But it is so difficult to get good sound off your set, isn't it?

I’ve got some iRig mics that — when the kids do their news broadcast sort of thing, they can use. But the more I can get them to narrate their story, have live actors, or have pictures they borrowed from the internet with historical people… and then do a narration in post and use one of the nice microphones or at least get closer to their iPad in a more contained area where they don’t have a lot of the background noise…works much, much better.

And also it helps to make a shorter story.

Shorter is better, and concise is nice.

If you’re not fighting dialogue, and people working through their lines — if somebody’s doing it with a narration, you can get the same amount of information, or more information in that short time period.

Vicki: Joe, as we finish up, what’s the simplest way to start?

Simplest way to get up and running?

Joe: You just do it.

Vicki: OK, teachers! So making videos, making digital film is an incredible way to really enhance learning in every subject.

In my own classroom, it’s one of the most exciting things that we do. I’ve actually added another digital film project this spring, just because my students are really in to making digital videos.

It does take a little bit of work, though, and you do have to plan ahead.

Thanks, Joe, for this great advice to help us make better videos with our kids! 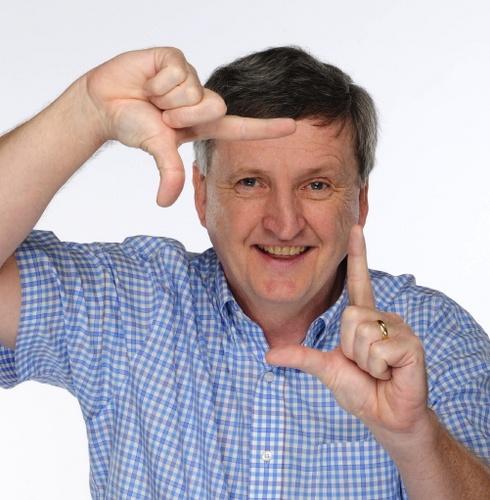 After seeing how well video making worked for his Spanish students, Joe moved from the Spanish classroom to an AV/Media Coordinator position. He is an American Film Institute Screen Educator and an Apple Distinguished Educator. He is currently serving as the Creativity & Innovation Specialist at Meridian Middle School in Buffalo Grove, IL as well as teaching in the Wilkes University Instructional Media Program.