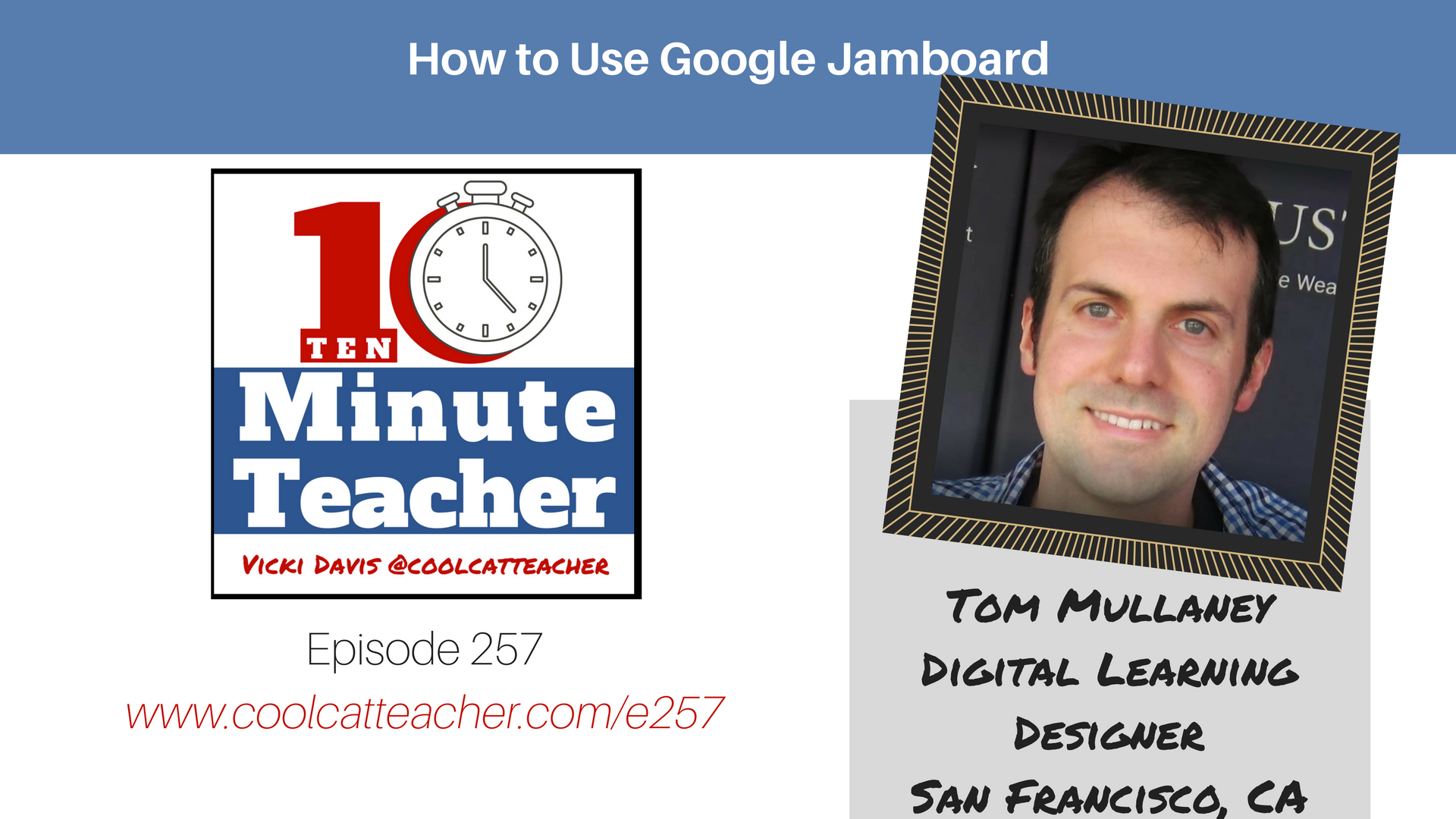 Google Jamboard is a fun interactive app. There’s hardware too, but don’t be worried. The free app has lots to play with. You just download it on Google Play or iTunes and use it with your touch Chromebook or iPad after listening to Tom Mullaney share how it works. Enjoy this fun, free tool. 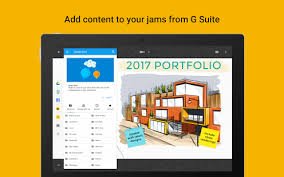 Check out Jennifer Gonzalez’ 2018 Teacher’s Guide to Technology for more than 200 tools with special tips, videos, and screenshots to get you started. 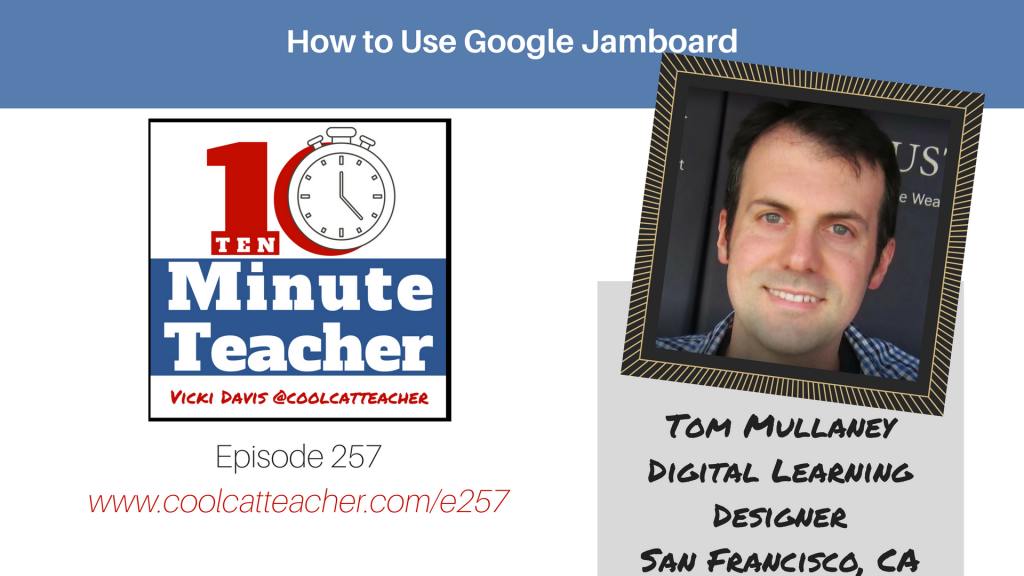 Vicki: Today we’re talking with Tom Mullaney @tommullaney. He is in the San Francisco Unified School District as a Learning Integration Designer, and he does it with digital technology.

Now Tom, you and I have talked about two technologies that you’re particularly excited about with Chromebooks — Google Jamboard and Google Expeditions.

Now first of all, I have never heard of Google Jamboard. What is it?

Tom: So Google Jamboard is actually a $5,000 piece of equipment. Don’t stop right there. Don’t get worried. It comes with a free app that students can access.

Google Jamboard is a free app

They could access it on a their phones. It’s a little bit small. But also on iPads and on Chromebooks that have the Play Store enabled, which is where education Chromebooks are going.

Vicki: OK. So Jamboard is a piece of hardware, and this is going on inside the hardware that’s connecting them? Is it like something physical that you’re interacting with?

Google Jamboard is also a piece of hardware, but you don’t need it to use the free app

Your kids could do this on an iPads tomorrow. If they can get Google Jamboard on their iPad, they can be in there collaborating with their peers, just like you would in any other Google app, but you have all this fun drawing and collaboration abilities, essentially. So it’s the app that we’re focused on.

Vicki: So your school doesn’t have to own a hardware piece to use Google Jamboard… for this to work. All you have to do is download a free app.

Tom: That’s correct. The hardware that you have to own — iPads or touchscreen Play Store enabled Chromebooks — which if you own them now, it’s very likely your district may own in the next year or two.

Tom: Right. It’s the kind of thing where — they want to make money, right? They’re a business — but you just have to dig a little deeper and get the app. You can do all the stuff for free.

Vicki: Cool. OK. So you said that kids can interact. They can have a collaborative space. So this is past what they can do with Google Docs, sharing in Google Classroom?

How is this different from collaborating using Google Docs?

Tom: Yes. So in this space, you can draw. They have shape recognition, handwriting recognition, or autodraw. So you can try to draw a house, and then it will predict what you drew and give you options. “Did you draw a house? Did you draw a sun? Did you draw a boat?” of all this cool stuff. It will highlight, or cut things up. You can add more frames, so the space can be somewhat infinite because you can always add frames.

There are emojis. You can insert emojis right away. Think about how teachers could use that. They could be a collaborator on a jam, and start putting check marks and smiley faces into the elements of the jam they like, and so on and so forth.

Vicki: OK, so this is like the next level of the next step of Google Drawing?

It’s like the next level of a next step of Google Drawing, but much more

Tom: It is, but let’s think of it a few different ways. So Google Drawing is not sketch or touch-friendly, and there’s no mobile app for it. It’s only a web app.

Jamboard is very touch based, but you could use your mouse for most of its functions. So it’s more artistic as far as sketching or scribbling words. And you can scribble words or use the handwriting recognition. It’s a lot more tactile and artistic. Think of drawings as kind of a posterboard, and Jamboard as tactile drawing plus integrating content such as images from the web or or images from your webcam or something like that.

Tom: Yes, now of course, this is so new. There’s no Google Classroom integration yet.

There’s no Google Classroom integration yet, but there are ways to share

At the same time, when you start a jam, you click the three dots — you see them in a lot of Google apps — and you see “Add people.” That’s where you would add people. You just type in their email address.

That’s where you can also connect to a meeting and make it a Google Hangout, which takes place inside the jam, which is cool. Think of the collaboration possibilities for that — for homebound students, for guest experts that want to collaborate with your class, or vice-versa.

There are so many different ways to collaborate in this space. It’s really fun and new and different and exciting, for sure.

A practical example of a way to use Jamboard

Vicki: OK, You’ve talked a lot about Jamboard. Tom, if you had a teacher who said, “I teach history. How can I use it?” What would you say?

Tom: I would say a few things. So let’s say we’re studying Andrew Jackson, just to throw an example out there. So what I’d probably do is I would divide the subtopics of that for the unit, amongst the class. “So you guys, you’re 1824 election. But you guys are his Native American policy. And you guys are Bank War,” and so on.

And what I would do is say, “As we go through the unit, I want each group to continue creating and putting things into their jam for that topic. So in a few ways, that can be beneficial. If you get a new student, the new student becomes a collaborator in each of the jams, and they’re caught up in a nice visual way.

Also, at the end of the unit, you could have a gallery walk. Another way you could do that is you could say, “Alright, this group has this project, that group has that project. Then use Jamboard as the kind of storyboarding and idea generation space that the teacher is also a collaborator in, so they can collaborate in that space in real time and give feedback.

Tom: You could. So if you have the Jamboard app, it’s not designed for this, but I will say this: I like jotting notes on Squid or on Google Keep. But I actually prefer jotting notes in Jamboard because I have a little embedded web browser, where you get your web content. I can put emojis in there. I have handwriting recognition, or draw shapes in there. As a jotting/sketchnoting tool, it actually is really robust and fun.

Vicki: Neat. OK, and so when you’re done, you export it as a PDF and you can put it into Google Keep? Can you also export it as a JPG or PNG, or just a PDF?

Tom: So, the entire jam you can do as a PDF. So you can do it that way, and then once you have that you can submit that as an assignment.

I would say that jams are kind of “messy,” so if I was assessing a jam, I wouldn't assess on neatness. You get messy. You just do. It’s fun. It’s part of the process.

As far as images… So it will save an individual frame of a jam — think of that being like one slide of a Google Slides — it will save that one frame as an image. And that can be brought into Google Keep, where more things can happen with it.

Vicki: Cool. Well, we’ve learned all about Google Jamboard today. I’m going to be playing and taking a look at this. Remember, it doesn’t integrate with Google Classroom quite yet, but if you can pull it out, you can pull that content in in other ways.

Vicki: Thanks, Tom! This has been fantastic! 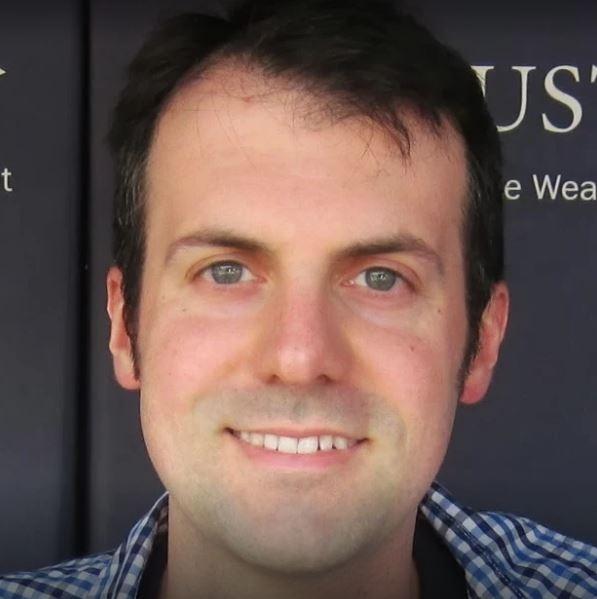 Tom Mullaney is a Digital Learning Integration Designer for the San Francisco Unified School District. Tom’s education experience includes Special Education, Social Studies, and educational technology coaching in New York, Pennsylvania, and North Carolina. He is a Google for Education Certified Innovator and Trainer. Tom hosts the Sustainable Teaching Podcast where he interviews teachers about their careers and passions. Connect with him on Twitter, @TomEMullaney.

All Posts »
PrevPreviousWhat Do You Wear? A Bib or Apron
NextKeep Your Head Up When You StumbleNext

As interesting as Jamboard may look and read…, it’s just a shame it’s only limited to Android users!!!!!!!!!!!!