Wearables are in education. Without us noticing, many of them walked through the front door. Since wearables are here, let’s understand and use them today.

This post is sponsored by Samsung. All thoughts and opinions are my own.

As an illustration, some wearable devices can count:

Furthermore, your wearable device can even become a personal secretary of sorts. To be sure, wearable technologies have many uses in the classroom an in our world. Given that research predicts a 46% growth of wearables in education between now and 2020, we all need to understand them. It is my hope that you won’t let the simple, easy power of wearables hide behind big words. With this in mind, let’s pull back those big words and get to the big ideas that make wearables so wonderful (and a bit scary.) 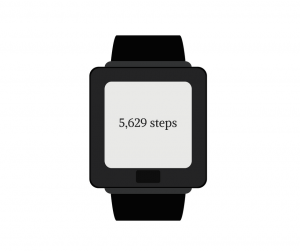 Physical education teachers are getting excited about biometric monitoring devices.

Understandably, physical education is one of the first areas to use biometrics. First, some claim it helps today’s digital youth develop healthy lifestyle habits. Second, many believe that early intervention through wearables is a key to preventing massive health problems as today’s predominantly obese youth grow up.

Third and perhaps most importantly, in-the-moment management of healthcare can help doctors and patients connect and cooperate. Imagine a diabetic’s blood sugar dropping and his doctor knowing in moments. Or, what if a heart patient had special care when her blood pressure became too high. These same technologies will link students with school nurses and link schools to emergency care.

But, the wearable web will take us much further than medical monitoring. 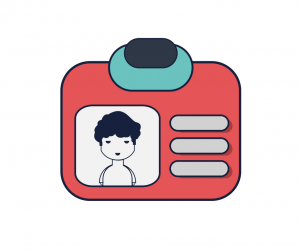 Some student attendance badges have Radio Frequency Identification (RFID) built into them. This makes it easy to track attendance and the location of students but also comes with privacy concerns.

Currently, RFID tags are already helping businesses keep inventory. In a similar manner, some schools have used these chips to help track attendance. One school quickly dropped the use of RFID tags in tracking students because they claim no impact on attendance. However, one school for emotionally and behaviorally  struggling children uses an RFID system to call for help.

RFID stands for Radio Frequency Identification. These chips interact with sensors. So, when a school in Cincinnati used RFID in student badges, they were able to give some pretty cool features to parents. For example, when a student scanned their card to get on the bus, a parent could receive a text message.

Schools aren’t alone, Disney uses the chips in plastic wristbands to monitor your journey through their amusement parks.

Understandably, many privacy groups see RFID tracking as just one more way to give up a child’s privacy. Not surprisingly, some backlash has caused states like Florida to ban their use.

But don’t think monitoring is the only use of wearables, we can also see the world in a whole new way.

Perhaps the most talked about wearables are virtual reality and augmented reality headsets. However, not all headsets are alike. Let’s define the two basic types of wearable headsets being used in schools. 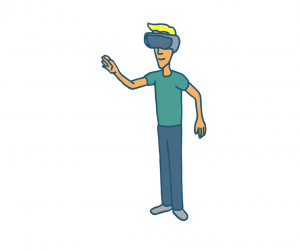 Virtual reality headsets immerse you in a new world inside the goggles. Some even have sound built into them.

The potential for VR headsets in education have been a topic of conversation for some time. My students take “virtual field trips” on the inexpensive Google Cardboard headsets.

On one hand, the experiences are fantastic. On the other hand, students have no knowledge of their physical surroundings. As a result, I appoint each VR headset “traveler” to have a “watcher” to make sure they don’t hurt themselves.

The word “augment” means to add something. So, simply put, augmented reality adds something on top of the real world. 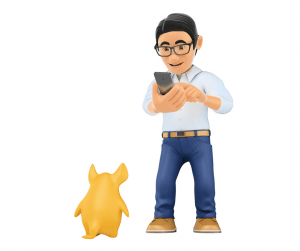 The old Arnold Schwarzenegger movie, Terminator, shows an augmented view of the world. In the movie, moviegoers often see the world through “the terminator” robot’s vision. As this robot looks at the world, text appears to show him targets, where to go, and other information. Soon this technology will be available in our classrooms.

Google Glass gave some people a sneak peak into augmented reality glasses. But soon, everyone’s glasses and contacts could change our view of the world. You might see information about a person as you meet them the first time. For those of us who struggle with remembering names, we could add people’s names to our view of the world. Once we do this, a person’s name might appear right above their head as we see them.

To extend this technology to the classroom, a search may be a moment away. In this way, imagine a student saying,

“What are the eight wonders of the world?”

Within moments, the answers to their question could appear in view. As teachers, helping students understand will become even more important. Facts will be a glimpse away. A picture of books and text can be taken with a glance. Furthermore, those pictures can be stored and accessed later when needed. Memorization may become even more irrelevant as facts become more accessible.

A New Way to Be Human: Augmenting the Human Experience

With the improvements in voice recognition (Google Now, Siri, Alexa from Amazon), talking to our wearables is now easier than ever. In my classroom, I’m often setting timers, alarms, appointments on my calendar, reminders, or even sending quick text messages to parents via my wearable device.

When my son has a new grade in Powerschool, I receive a notification on my watch. In many ways, the voice activation and tight connection with cell phones has made my own wearable more like a personal secretary than a watch.

Interestingly, artist Neil Harbisson is the world’s first human cyborg. Due to a visual impairment, Harbisson is unable to see color so, he uses a camera that sees color and turns various colors into sound. So, literally, Harbisson hears color.

In similar fashion, in 2014, Lanie had no voice. Her teacher, Jennifer Cronk, helped her get it back. You see, Lanie has cerebral palsy and could not speak without a special eye tracking device. This device turned Lanie’s eye movements into typed or spoken words. Mrs. Cronk and Lanie’s classmates raised the money to get Lanie a portable device that traveled with her on her wheel chair to let her communicate with the world.

My friend Scott Rigsby became the first double amputee to complete the Hawaii Iron Man. Interestingly, Scott was cited amidst concerns that Oscar Pistorius’ gave him an unfair advantage in the 2012 summer Olympics.  (A fact yet to be proven.)

However, if you look at the robotic exoskeletons being worn already in the military and in some jobs, you’ll soon be able to put on a suit that lets you lift a hundreds of pounds. Some of these exoskeletons are being used already to help the paralyzed walk again.

So, we’ll continue to see massive leaps forward with all types of disabilities. It is possible that students with impairments will have a totally new way of sensing the world, thus causing the rise of the term transhuman. Understandably, discussions of transhumanism are full of controversy, concern, and ideas about the future.

Whatever your concerns are about the future, the reality is that we’ll be able to teach and unleash more human potential because of our increasing ability to help those who need help sensing the world around them. As a teacher, helping the blind see and the lame walk is a great thing.

Many call Web 3.0 “the semantic web.” You can talk to it. Lots of things connect.

Perhaps if we look into Web 3.0 and beyond, the Internet will become the biologic web. For eventually, not only will we wear the web, we will likely ingest it, implant it, and inhale it. While many of the possibilities will come with their own ethical issues, the future is already here. We’re wearing it.

Disclosure of Material Connection: This is a “sponsored post.” The company who sponsored it compensated me via cash payment, gift, or something else of value to edit and post it. Regardless, I only recommend products or services I believe will be good for my readers and are from companies I can recommend. I am disclosing this in accordance with the Federal Trade Commission’s 16 CFR, Part 255: “Guides Concerning the Use of Endorsements and Testimonials in Advertising.)

Categories: Education, Education Trends and Topics, How to Guides..., Innovation, Technology, Tools
Disclosure of Material Connection: Some of the links in the post above are “affiliate links.” This means if you click on the link and purchase the item, I will receive an affiliate commission. Regardless, I only recommend products or services I use personally and believe will add value to my readers. I am disclosing this in accordance with the Federal Trade Commission’s 16 CFR, Part 255: “Guides Concerning the Use of Endorsements and Testimonials in Advertising.”

One thought on “Wonderful World of Wearables in Education”