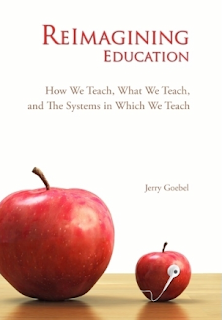 I get quite  a few books to review, but this one had me captured as soon as I opened it.  Reimagining Education by Jerry Goebel is obviously written by a man who loves kids who can be tough to love.  Although, he does work with a faith based program, so many things he writes about are just plain common sense.

Although his suggestions aren't written from a classroom teachers standpoint, many of the suggestions are things I do in my own classroom.  Some of my favorite quotes sure to spark debate:

On the issues raging in science and religion:

“The true duality faced faced by today's youth and adults is not between science and religion, but between scientists who overstep their discipline and religions who fear that God might be larger than their theology…It is wrong when one ‘adult' party or the other steep their statements in presumptuous language and attack the character of those who believe differently.  This may feel righteous to the adults involved, but becomes intolerance for the children who observe our tirades far more closely than we truly wish they would. Young people may or may not ‘get' the concepts we teach, but they sure ‘get' the incivility of the discussion.” (p37)

What Goebel does extremely well is define the role of volunteers in the lives of children.  He defines poverty as “the lack of healthy relationships” and states that “social networking is one of the most important skills we can develop in our lives,” a skill rarely taught in schools.  And note, he is talking about online and offline relationships.

He also talks about how to use students as leaders (often putting them in other schools for temporary leadership roles to avoid the stigma and pressure of being teachers pet) and how “prejudice cannot withstand relationship” (p 59) – something I wholeheartedly agree with as I've seen it in many of our projects.

Sometimes I wanted to stand up and yell “yes!” like when he says:

“We know that a child is most likely to be bullied within a block of school or a block of  a bus stop.  We even know the time – between 3 and 3:30 every afternoon.  If we knew the places and times that an adult was most likely to be assulted or harassed, we would impeach our mayors if they didn't do something about it.  We have such a double standard for what we are willing to let our children tolerate. If they get beat up, we call it bullying, if we get beat up, we call it assault.” (p 69)

He talks about the widening gap between education and community and made a statement that should haunt every person approaching retirement age:

“a young person might go through their entire career without every seeing a dying or impoverished person.  But consider this, at some point in time, these young people will be called to set public policy for the care of the Baby Boom generation that is now retiring.  Our students today will be responsible for the largest group of retirees in history. How does a young person make an informed decision with no personal connection to those who will experience the impact of those decisions.  Simply stated, he or she doesn't.”

I think this is an important book to read because it talks about many of the things left out of current “educational” material.  Community service, connection, love, acceptance, respect, empowering students to help improve their community in ways that work, and the need for volunteers in the lives of students.

You may not agree with everything he says, but it will get your mind thinking in directions that it needs to go, for the good of education.  This is a grassroots book that deserves attention, and no, I don't make one dime on the sale of this book (online on lulu) and I don't know Mr. Goebel (but I want to.)

This is an excellent book — he has a public school version for secular education as well as a faith based version of the book. This is a great read and I literally have read the whole thing in a day and a half.

Thanks for this review. This book sounds fascinating. I am going to check it out.