Is it that we don’t have 28 people die like we had in the Camilla tornadoes in 2000 to get people upset? Is that why Albany Georgia’s tragedy is ignored? Or is it just that the news media is so busy covering reality DC that they don’t have time to report on a storm that left 8,000 homes without power and my Facebook sources tell me thousands of homes damaged. With 9 tornadoes – that’s right NINE TORNADOES and 3 thunderstorm wind events reported by the National Weather service, I’m at a loss trying to understand why this isn’t national news. Without power for days, we have cold weather coming, and many impoverished people are going to suffer greatly. This is the fourth poorest city in America! But if you turn on your TV, I doubt many of you will hear about it. And this complete lack of reporting is a problem. In this blog post I’m going to share why this is a problem and what we can do to help the survivors in this growing disaster.

“This is undoubtedly the biggest unreported storm I have ever seen.” – Todd Taylor, a Samaritan’s Purse Program Manager in Albany, GA via their Facebook page.

I’ve embedded a film below, but it is from Facebook and some of you may not be able to see it.

When I got up Tuesday morning, I turned on the news, and heard about “some storms.” Some traffic lights were out. I did not grasp the magnitude of what happened. People at school were talking about the tragedy, and I thought,

Nope. Mainstream media is too busy covering reality DC these days to talk about what truly matters. 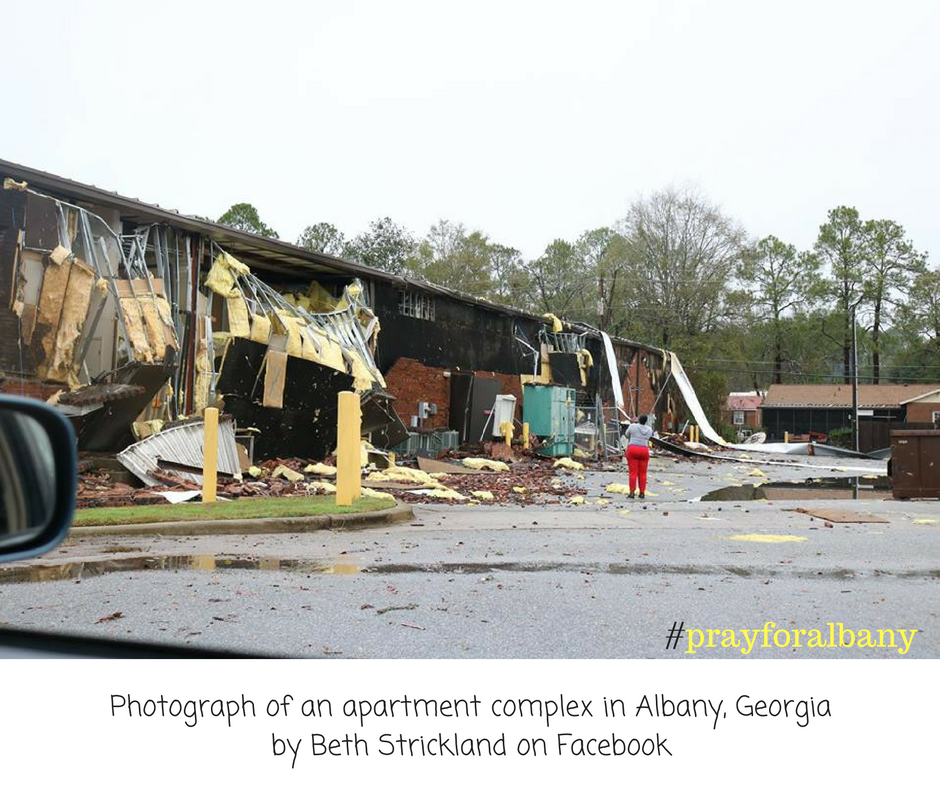 As we saw during the election, the media seemed to be too busy manipulating us to inform us about things that matter to us average everyday folks. They’d rather get us upset about something over which we have no control than tell us about something where we can actually help. And they’ve failed yet again.

But you know who hasn’t failed? Mainstreet media. That’s you and that’s me. And we CAN make mainstream media notice if we all bring awareness to this. In fact, I’m hearing that MOST people are hearing the depth of tragedy through Facebook and NOT the media. And the media wants to know why they’re irrelevant.

I’ve asked for photographs and stories and Mainstreet media has filled my inbox with the pictures I’m sharing as part of this post. Feel free to add yours. Also note, while I’m using the hashtag #prayforalbany there are many towns impacted. I’ve heard from Newton, Meigs, Leary, and Baconton about extensive damage. This is a storm disaster of massive proportions. 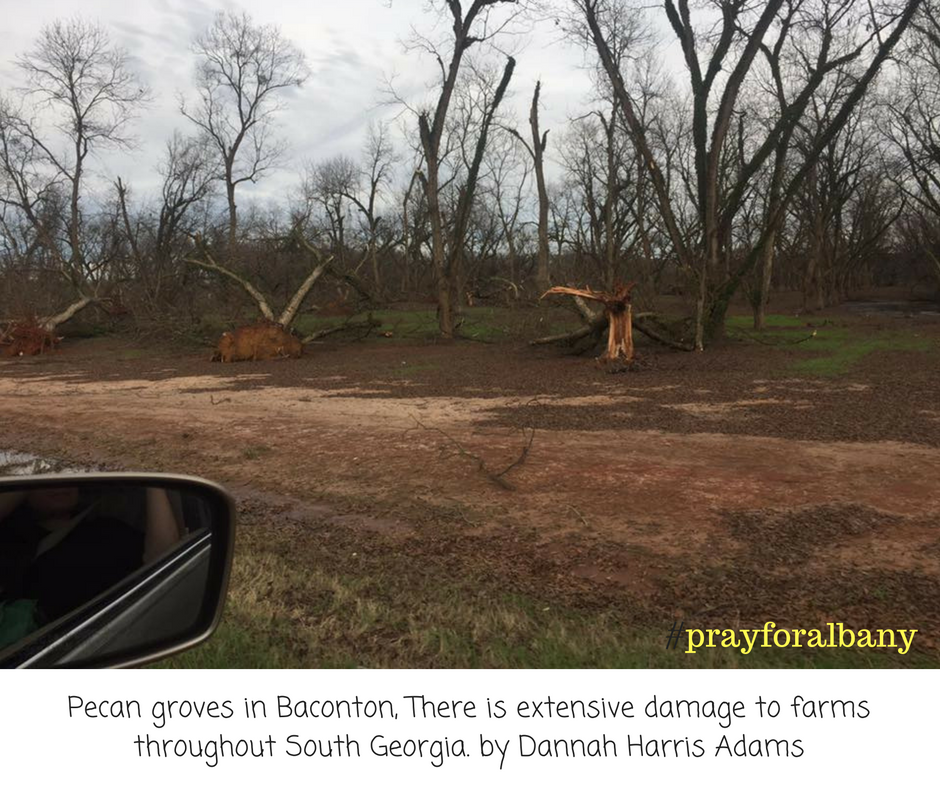 I learned the depth of the tragedy from my church Facebook page when I got home from school at 4pm Tuesday. That was when we started collecting water to respond to the desperate and growing need.

You see, I have personal experience with storms before. In 2000, Kip and I were head of the Mitchell County Volunteer Command Center. On February 14, 2000, three tornadoes ripped through my tiny hometown damaging over 200 homes. We also had a terrible loss of life and 28 people died. It was something none of us would ever want to relive. There are no fond memories. We only feel the pain. But, just like in Albany, the entire community pulled together to respond to that storm.

The second day in Camilla, a big truck from Alabama full of bulldozers and heavy equipment pulled up and said,

“Where do you need us. We’re here to help, but we’re not here to charge.”

Because of extensive national news coverage, there were people everywhere coming out to help. Random strangers just showed up, helped, and left. We didn’t even know all their names. They knew that there was a need. That is what average everyday Americans do — we show up to help our neighbors.

That is if we know they need help. I’ve never seen anyone show up for a disaster they didn’t know about first. 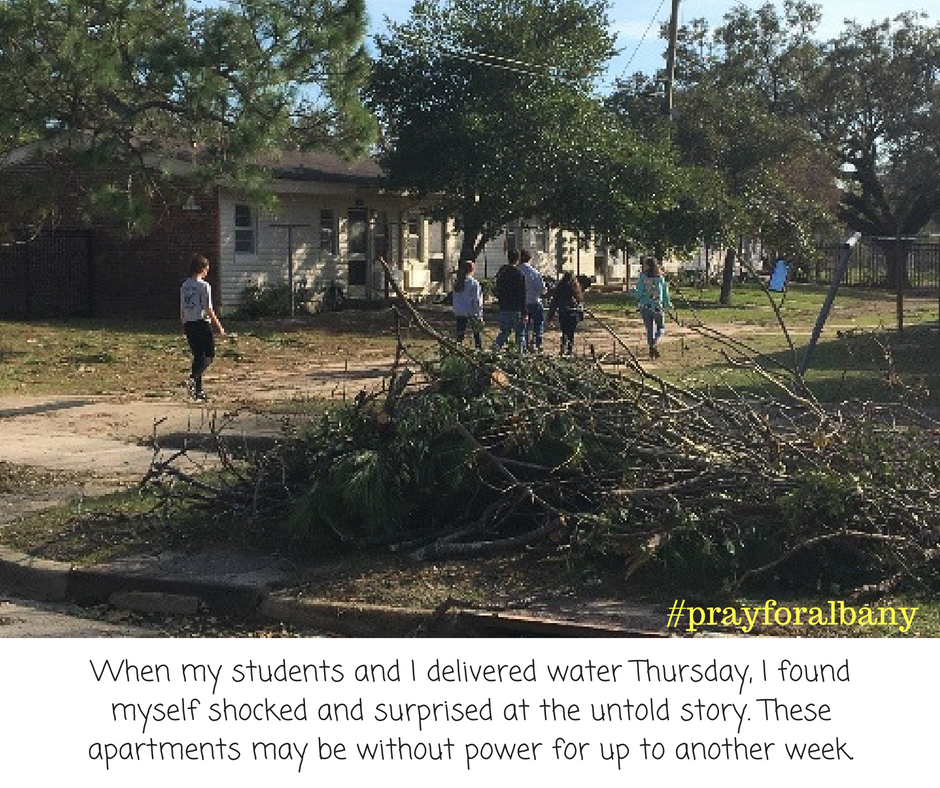 What I Saw When We Delivered Water in Albany

Well, yesterday I wanted my students and I to be those random strangers who helped. We gave out flats of water in public housing projects near Hugh Mills Stadium in Albany.  To my surprise, I saw a tragedy that far exceeded the damage I saw in Camilla in 2000.

And I didn’t see one truck from the media. So, here’s our truck. My Mainstreet media friends and I are telling you what really is happening.

There are lots of trees down. But bigger than this, many people are without power. Many very impoverished homes have had refrigerators out since Monday and won’t have power for perhaps weeks.

Just because you don’t have a tree in your yard doesn’t mean the storm hasn’t upended your life. 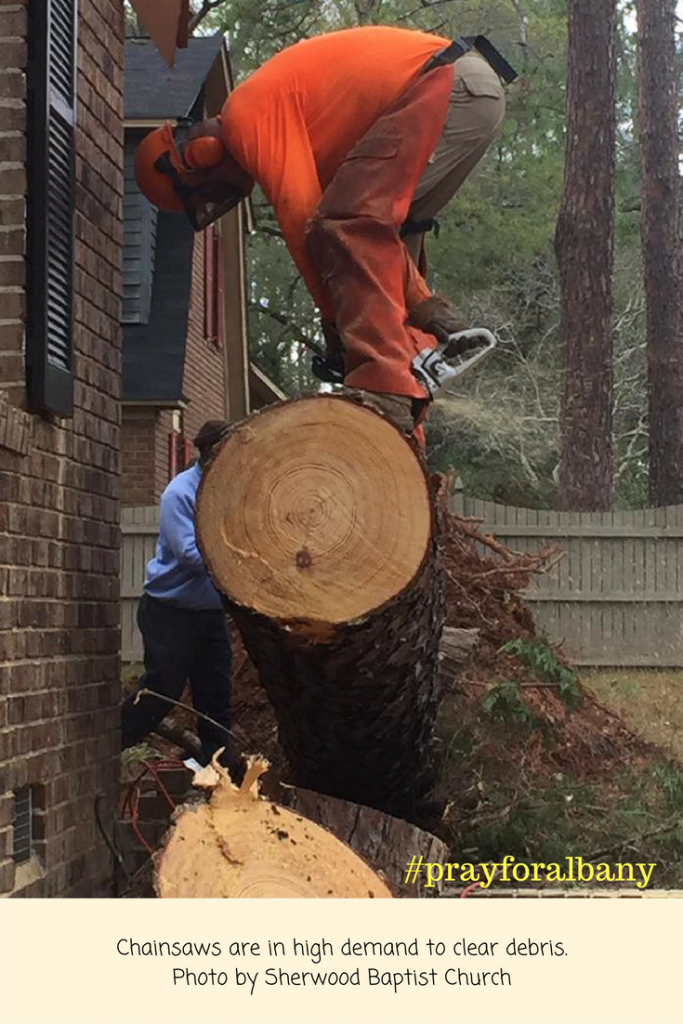 Here’s the problem when the media ignores a tragedy:

In my experience, when dealing with a disaster – nothing makes it better. Your only hope is to help people get better, faster. That way, you don’t have people feeling hopeless, getting depressed, and acting out in their pain.

Simply put, you want to help as many people as possible get back their life as soon as possible. 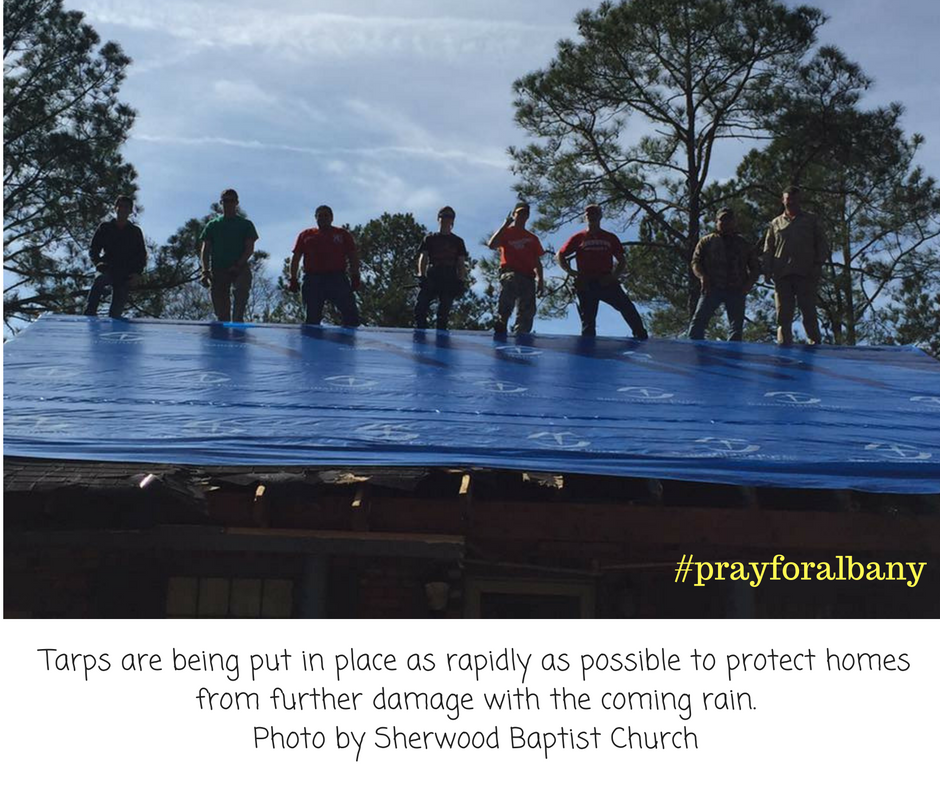 How the News Media Is Letting Us Down

The city of Albany is mobilizing and helping itself. But, even here I heard a local news reporter joking that she hoped for snow on Saturday. I yelled at the TV,

You have people who have been without power since Monday, who are living in freezing cold apartments with children, and you’re wishing for snow?

The complete and utter inability of the media to share what’s important in this world anymore befuddles me.

There used to be a time when news reporters reported on what was important. Additionally, they felt they had a responsibility to speak the truth. Now, I think they’re more interested in reality DC than they are in speaking the truth about what’s happening out in America.

Well, average America needs a responsible media, and guess what. You and I now have a job we were never intended to play.

Now last night I tweeted all of the mainstream media and of course didn’t hear a tweet back. I mean for all they know I’m just a random person with 134,000 Twitter followers.

My life was not made better last night when they went in and re-shared the live stream of the abuse of a special needs boy by four people. I can do nothing about what happened but be shocked and upset. Instead, why didn’t they share about the damage in Albany, Georgia and how they need help? The cold is coming and people are still without power. 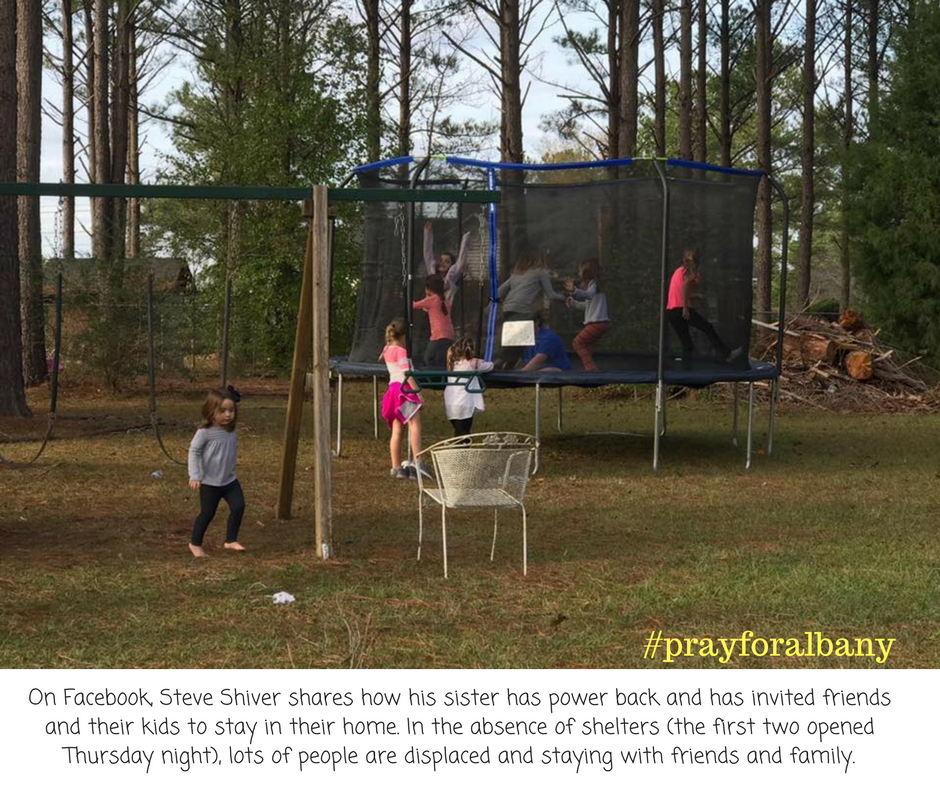 Who am I? I’m a small town schoolteacher who some people read. And the people who read my blog aren’t just slacktivists; I attract ACTIVISTS. I attract people who DO SOMETHING to make the world a better place. We don’t whine about it; we do something about it.

So, dear reader, I now dub you, “mainstreet media.” You have a job to do.

1 – Tell People About the Tragedy And Ask for Their Support

Tell people what is happening in Albany, Georgia.

Not everyone can come. Support your favorite disaster relief organization, or I just spoke to my pastor, Michael Catt, and if you donate through my church and designate for disaster relief benevolence that 100% of your money will go to help.

Now, get out there and do something.

Is this the Only Tragedy We’re Not Hearing About?

And when you know the tragedy in your local area that is not reported, it is your responsibility to report on it and to tell people. You now have a new job in addition to all the other jobs you have.

You must make sure that what you share is true, accurate, but also that it is stuff that that truly matters. Because it seems the people who have that job right now aren’t.

Let me also be super clear. The people in South Georgia are working hard and coming together. But many people even here in South Georgia are still uninformed as to just what has happened. We are literally finding out more and more via Facebook daily and shocked to realize that this story isn’t being told except to each other on Facebook. I just see a stark contrast in how the media covered the three 2000 tornadoes in Camilla and the nine South Georgia had on Monday night. I find no valid explanation.

Comment19 | Share | Tweet | Share | Pin It | email
Categories: Education, Education Trends and Topics
Disclosure of Material Connection: Some of the links in the post above are “affiliate links.” This means if you click on the link and purchase the item, I will receive an affiliate commission. Regardless, I only recommend products or services I use personally and believe will add value to my readers. I am disclosing this in accordance with the Federal Trade Commission’s 16 CFR, Part 255: “Guides Concerning the Use of Endorsements and Testimonials in Advertising.”