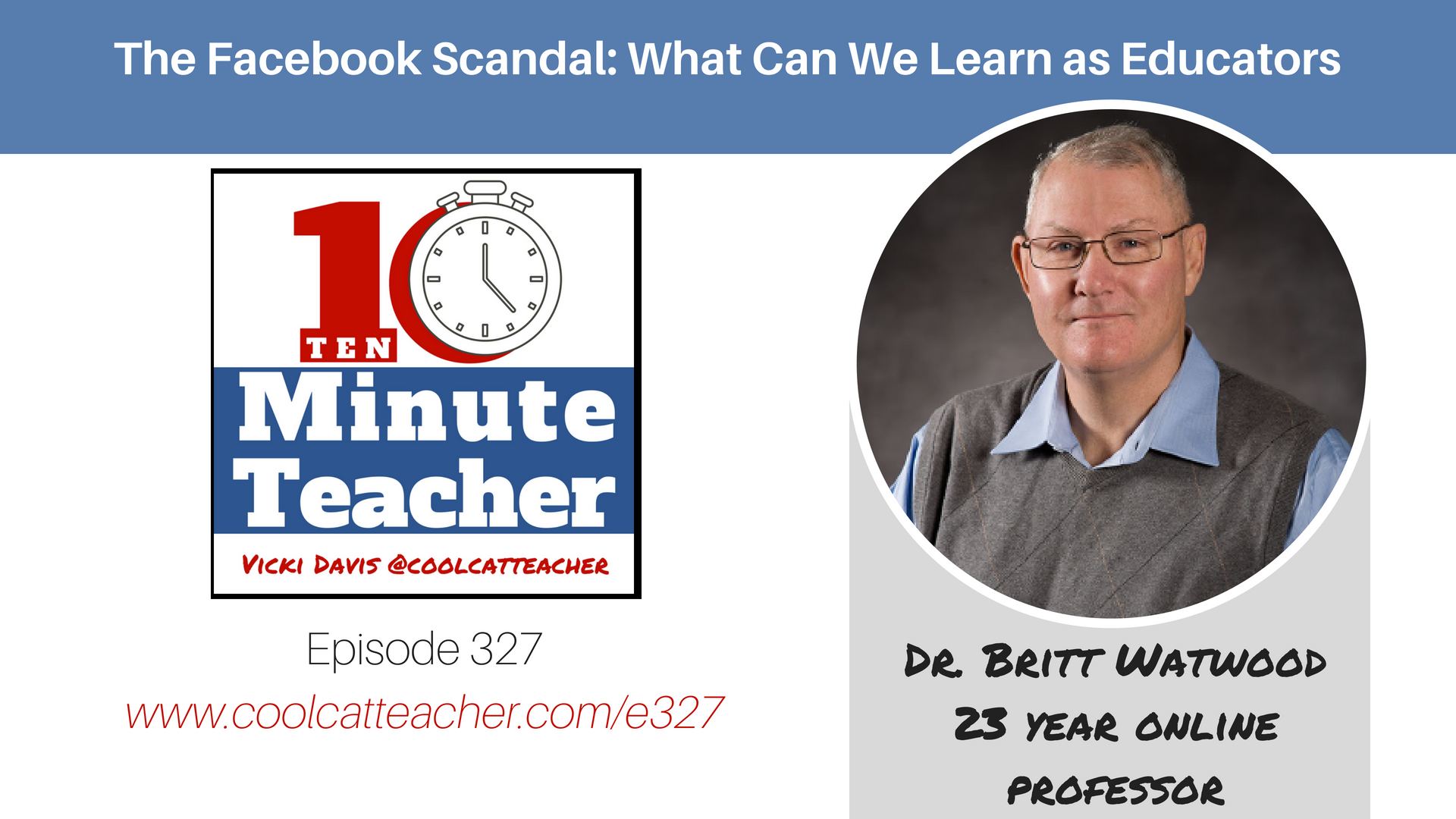 The Facebook Scandal: What Can We Learn as Educators

Home » Education » The Facebook Scandal: What Can We Learn as Educators

Professor Britt Watwood has moved his college classes off Facebook. Today he reflects on the implications for educators and how he’s talking about the Cambridge Analytica scandal with other educators.

The Facebook Scandal: What Can We Learn as Educators

Vicki: The Facebook scandal with Cambridge Analytica and more. What can we, as K-12 teachers, learn about it?

Today, Britt Watwood is going to tackle this topic. So, first of all, Britt, how would you explain, in simple terms, what happened on Facebook and why so many people are wanting to #deletefacebook?

I am a college teacher, but I have been using Facebook in my classes for about the last six years. I got concerned when the privacy scandal broke last March.

In a nutshell, Cambridge Analytica, was a corporation that used Facebook data and had permission to look at about a quarter million accounts, but because of the way Facebook sets itself up, whenever you give permission to Facebook, you’re also basically giving permission for Facebook to look at your friends.

Cambridge Analytica was able to take that quarter million accounts that it had permission to look at from Facebook and mine fifty million accounts to look at trends and how people thought about politics and then potentially use that to move the 2016 election in different ways.

Obviously those 50 million people did not know their data was being used.

Britt: So it became a real public relations nightmare for Facebook, but it also raised troubling questions about, “What do we know about our data?”

Vicki: Yeah. So, Britt, did you delete your Facebook, or not?

I think the reason is the same reason a lot of people looked at Facebook. We got so used to using it to connect with family and friends, there wasn’t a good alternative.

Vicki: What are using instead of Facebook for your classes?

Britt: In my classes, I’m using strictly a Blackboard LMS and I’m using Twitter, which I felt was a less onerous use of social media for classroom conversations. People kind of understood that anything you tweet is out there.

When I set up the Facebook closed group, I was under the assumption that people could use Facebook for communication in our class, and nobody outside the group could see it.

But just by requiring my students to have a Facebook account to do that, I was potentially setting them up to have their data mined. That bothered me.

Vicki: Okay, so you’ve moved off of the private group. What else? What can we learn from this?

I think you’ve got a pretty cool acronym that you once shared that we need to consider when we are using Facebook today. What is that?

You’ve got a pretty cool acronym. What is it?

Britt: The acronym is P.R.O.V.E. You have to prove to me that it’s worth using Facebook, or any social media, for that matter.

P is for Privacy. We’ve got to do a better job as educators understanding our own privacy by helping our students understand how to set up THEIR privacy. There are some good websites out there – I’ll share some links at the end, here with you on setting up your privacy.

The R is for Respect. There are multiple viewpoints online. In this age of very partisan bickering online, we need to do better jobs of respect.

O is Observe. That means that, anytime you see something on the web, you need to think about it before you jump in. I like to think about the fact that good citizens pause before they like, comment, or share, and kind of ask “What does this say about me?”

V is for Validate. Before you share something, you should make sure that it’s valid.

Finally, E is for Engage, because I do not think that banning and deleting Facebook or staying off of social media is the answer.

We just need to do a better job of educating ourselves as teachers and educating our students on being good digital citizens.

Vicki: I think that it’s important for us educators to remember that nothing is free.

Basically, the commodity is we have agreed to allow ourselves to be surveilled. That’s what we said. You could watch me, you could stalk me, you can see all of my purchasing habits, what I’m doing, and, in return, I will use your service for free – but at what cost?

Do you think people are just starting to understand that their privacy is worth something?

Britt: Well, I think they are starting to understand it better. This is one of those evolving phases. It’s interesting to watch in the last month how Facebook has basically started a public relations campaign to say, “Hey! Come back! You joined me for a valid reason, and that was to connect with people.”

All true, but at the same time, those connections allow Facebook to advertise and share their accounts with other advertisers. I think that it’s a great point. It’s not a free world out there, and we’ve got to do a better job of educating ourselves on what we’re willing to give up to make these connections.

Vicki: Another thing is, if you look at algorithms, they are dividing us.

Algorithms are dividing us.

This is about YouTube: I talked to a teacher who taught kids who came out of Syria, and he was in Jordan.

He said, “Vicki, how do I get them out of the warzone?”

Really, Facebook is giving us more of what what we like, and that has always been the big issue that I have, because there is no “Dislike” button – we can’t say, “You know what, person? You are crazy. You just posted something really ridiculous.”

There’s only a “Like” button, and it makes everybody think that their ideas are great and then it gives them more of those ideas. There may be only three people in the world who agree with them, but somehow, they’re going to feel like it’s the majority.

Britt: Right. You and I have both been in social media now for a decade. In the early days, it was a community. We kind of all enjoyed talking with one another.

In the early days, it was a community. But things have changed.

I think what’s changed in the past couple of years is 1) the community has gotten much larger, but 2) artificial intelligence has begun joining the conversation in ways we never expected.

That’s part of the Validate piece of my P.R.O.V.E. acronym – make sure that you’re talking to a person first instead of some Russian robot that’s out there.

Vicki: Oh, and the bots and the A.I. (artificial intelligence) are getting so good.

So, Britt, as we finish up, do you just have an encouragement or a word to educators as we all make up our minds and shape the conversation around what social media should become?

Britt: I think I saw a term earlier today on the web that I really like. It’s our “connectedness intelligence.”

I think we need to think about the fact that social media’s going to be with us in the future in ways that we really might not comprehend right now.

The important thing is for us to stay connected, stay talking to each other, and work together to educate our students.

This is something that should start in elementary school looking at your basic ideas of digital literacy, and then move into middle school and into high school and into college and beyond, so we continually retool ourselves as to what’s going on with the web and stay vigilant.

This is going to continue to evolve, and we need to evolve with it.

Vicki: So, educators, as we have this conversation, this is an important topic, and maybe one you might want to listen and want to talk to about – but terms like “filter bubble” and “privacy” and realizing what it means to be surveilled by the social media companies and the ads they send us and also the not-so-positive side of things.

There are a lot of conversations we can have around this topic.

Britt, I appreciate you coming in and reflecting what a professor thinks of this sort of thing and what your teachers that you’re teaching think.

This definitely is going to shape the future of education, just because so many of us educators connect on Facebook as well as other social media as well. 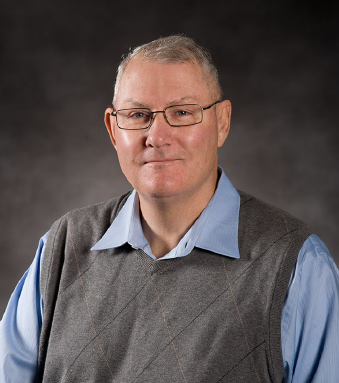 Dr. Britt Watwood is a retired faculty consultant who has taught (and still teaches) online for 23 years. His tagline on Twitter is that he is one of the world's oldest digital natives! He resides in the Richmond VA area.

All Posts »
PrevPreviousMotivating Struggling Learners in Summer School and in Class Everyday
NextHelping Kids Cope with Tragedy: A Story from a Middle School Jazz BandNext