I'm taking notes from Alan November's keynote conversation. He asked 3 questions and facilitated our conversation. This is a live blog post, so please forgive the lack of links and perhaps typos. 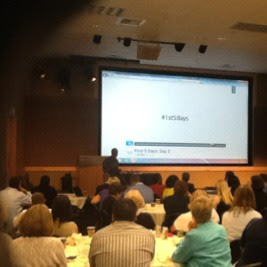 They told him they didn't focus on physical limitations – they told him they imagined that their limitations were infinite and then set to work in the “ideal” environment and then when done playing in the ideal environment of infinity then we look back at what we had to do. “if we started with our limits, we would go out of business because we wouldn't be pushing the envelope.” He says this changed his thinking.

He says that workshops in schools and that now we start with our limitations. He goes and works everywhere and in many places he goes, when he comes back 6 months later and there is change. In the US, 6 months later, inevitably nothing happened. He says we can conjecture about why the US has amazing individuals and creative people but there is no systemic change in the culture of teaching and learning. These systemic changes are happening in Australia and Shanghai. Our capacity in the US to adopt the changes that have happened may not do you justice. Many of you are going to be frustrated about sharing with colleagues and see changes that are systemic.

**What were your limits you designed when you put your project in place?
If there were no limits what would your project look like? Is your project already designed to be as good as it could possibility be or would you push it forward.

(NOTE: This is so important to flattening the classroom. The grassroots movement of teachers to connect is vital.)

Question: Tell me about your project because I want to adopt it. Explain your reality of what you do.

(NOTE: We should be sharing projects but also INVITING each other to join together. YES! This is what we talk about in Flattening Classrooms, Engaging Minds)

He talks to schools about how some teachers are innovative and those who aren't. Some have the same things, computers and even support staff — but the answer about schools that are really innovative and the answer is always “the principal.” He says that Principals are role models, they take risks and they don't mind and know how to support risk taking teachers. It is important to support those not taking risks as well – they know how to support both.

Can anyone make the case that your project has increased test scores? Quite a few raised their hands.

Talk about getting reporters. He says the fact that teachers are so humble and haven't been to business school to sell what they are doing – that is their biggest problem.

(I agree with this – I'm a business school grad and it has directly impacted personal branding in my life. There are times to share and you can do it without being egotistical.)

Stephen Anderson says “what does innovation look like so how do they know what is innovative. They think if a teacher is standing in front of a smartboard when they walk by that the person is being innovative and the important thing is for teachers and kids show admin what innovation looks like.”

Latest strategy from Alan November — he asks to have breakfast with students first. Before looking at anything. Want to have breakfast with kids with the principal with him/ her. Your job is to watch me interact with your kids. He starts giving them problems to solve on the web. In front of the principal, he'll say – can you think of a time you did really well and go an “A.” They'll always say, “yes.” Then, he'll say – show me right now how you did the search because he said he used the web for all of his sources.

Did anyone teach you about country codes. So he has them google a top level domain and the country codes — “root zone database.' Every second grader should know the country codes – root zone database. Iran is “ir” and say site:ir then he types in the information. so he searched site:ir “American hostage crisis” and he was able to see different perspectives. He doesn't care which child he's talking to, the principal is stunned because principals have a misdirected assumption that kids understand technology. The fastest way for a principal to understand there is a problem is to show them what their kids have done. He pulls a “trump card” – you need the right information at the right time.

This isn't about technology, it is about information. You've been labeling this wrong. He asks the principal “Do you want your students to get the right information at the right time across the curriculum?” Then, principals don't know what to do. The real issue is changing the design – make sure you get 3 Iranian sources but the teachers don't do that.

He has never met a student in the US who knows how to use the Internet well. Every kid says “I know what I'm doing.”

(NOTE: I agree with this, even my students get lazy about this. It requires constant encouragement and reinforcement from all teachers. This is one of the best speeches I've heard Alan November give b/c this is a great point here.)

The local conclusion – he suggests to every district to get rid of “technology planning committee” and instead call it “learning design committee.” There should be “learning design facilitators.” The child HAD the technology, the kid had the wrong assignment.

What will you do the first 5 days of school to SET YOUR STUDENTS ON FIRE??????

This is a vital question. Think about the first day of your favorite class. It was very hands on based. This is a nice video series about doing something intentional.

“You get caught by a song by the beginning notes.”

(NOTE: The first few days of school are VITAL. you need to energize and excite students AT THE BEGINNING.)

– Posted using BlogPress from my iPad