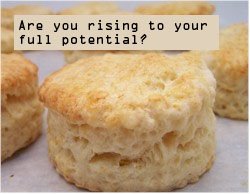 Now that I’ve written about the importance of commenting, I want to swing to the other direction and talk about who NOT to listen to. I want to share with you what I think about reaching your dreams and the importance of filtering the “comments” and advice you hear so you can be your best.

Zig Ziglar’s old classic, See You at the Top has a great story about Zig visiting his grandmother. He says that his grandmother baked beautiful, delicious fluffy biscuits.

We’ll one day young Zig went over there and the biscuits were hard, short and squat. His grandmother took one look and said something that Zig never forgot,

“Well, look there. Those biscuits forgot to rise and got baked in a squat!”

That is what happens to so many of us! We forget to rise to our full potential and somewhere along the line we get baked in a squat, unable to rise any further.

You see, Granny Ziglar had left out the baking powder, an essential ingredient for the biscuits to reach their full potential. That is what optimism and encouragement is to you. That is what wise advice is to you and your dreams.

In the same book, Ziglar also says that:

“Too many people are SNIOP… Susceptible to the Negative Influence of Other People.”

We listen to the people who say it can’t be done. The people who cannot see that things are changing but that change can be for the better. We listen to those negative people and remove the positive hopes and dreams that could buoy us to rise to great heights!

I classify those who try to advise me into four categories:

1) The Perpetual Critic (The PC)

Now, when my Daddy sings, the little kids in front of him turn around and snicker. He’s not really a music critic, but he’s a good judge of character. 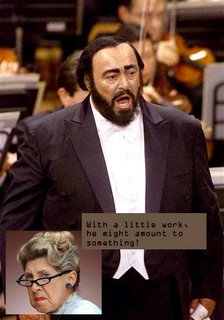 Relying on a hunch, Dad brought in a tape of a Metropolitan Opera star that he knew and told everyone it was a prospective minister of music. After playing the tape, this lady cogitated a little and said,

“Well, with a little work, he might could amount to something.”

Dad immediately discounted everything this woman said. She had obviously made a habit of criticism. People who have such habits are definitely people to ignore. They are Johnny one notes of the most destructive kind. Usually, perpetually unhappy with themselves, these people are definitely baked in a squat!

If you listen to them, you’ll end up that way! When there is a person like this in your life, take caution. Remember that you’ll never measure up or be good enough.

I’ve had a boss like this before and that is when I learned to have integrity and do the best job I could do and be content with that. For indeed, attempting to please such a person is a bullet train to a heart attack.

2) The Partial Talebearer (The PT)

These people are more difficult to spot. I’ll describe it like this.

My great great Uncle Tom was in the car with great great Aunt Frances. He was 86 and she was 87. He was caught speeding and pulled over by a policeman. The policeman said, “Well, sir, what is your excuse.”

Uncle Tom said, “Well its like this, my wife is expectin'”

“EXPECTING!” said the incredulous officer as he eyed the spry, but sagging eighty year old in the seat next to Uncle Tom. “Expecting what?”

Wryly, Uncle Tom said, “Expecting to get home for dinner and I’d better not be late, her roast is burning!”

You see, Uncle Tom bent words just a little. That is what the partial talebearer does but in a more dangerous and less humorous way.

The Partial Tailbearer loves to tell you the part you want to hear. Or the part that will get him in the least amount of trouble. He (or she) is pretty much dedicated to himself and are “spin doctors” of the dangerous kind.

It takes a while to sniff out this kind of person and you usually do it when you start sharing notes with others. Usually, you’ll be perplexed why you start hearing that a person you’ve known so long has done something out of character. If this is the case, then a partial talebearer is usually in the middle adding their own spin and partial truths to everything. I’ve seen the best of lifetime friends throw it all away because a manipulative partial talebearer got between them.

A word of advice, if this happens to you, go directly to your friend and work it out. Don’t let partial talebearers ruin your friendship.

Beware of the partial talebearer. They often sound too good to be true. They talk out of both sides of their mouth and you cannot trust what they say. Often in leadership, you learn to deal with this person, but to never take their word as the final say for what happened in an incident or for what will happen in the future. Their words will change when the next person comes along.

Don’t bother getting worked up with they betray you. They pretend to have character and lofty ideals, but are just chameleons, blending in with whoever surrounds them at the moment.

Of all the people, I probably respect this person the least. At least the perpetual critic tells you what they really think. If you like to deal with this type of person, just go out and hold a lightning rod out in a open field during the next thunderstorm! (In other words, you’re just asking for it!)

3) The Manipulated Mouthpiece (The M&M)

This person does not have their own opinion. They are easily manipulated by a cause, a political party, and organization, or a person and rarely have an opinion of their own.

One reason I respected Senator Nunn when I worked for him in Washington DC was that he made up his own mind based upon his constituents and his own principles and character whether it was along party lines or not!

When I vote for someone I don’t elect a pollster, I elect a person with character who has beliefs. They may not agree with me, but they’ll tell me and stand for something! That indeed is rare now.

I have voting tendencies but I do not totally agree with one political party on anything! No one is right all of the time. No one is wrong all of the time either! We have things to learn from one another, and although there are some people with wrong motivations, most of us are just trying to do the best that we can.

I am so tired of partisan character-slamming and the inability of some adults to disagree without sounding like first graders on the playground!

The manipulated mouthpiece is puppet for another. Be careful of them for you cannot predict their movements unless you figure out who or what is holding their strings.

They are always grasping for power that they perceive to be theirs for the grasping. Power is only an illusion for them, for they rarely garner respect, even of those who are manipulating them. (The manipulators just see them as “the dummy.”)

These are the “spineless” people we often talk about. People who have to go “ask” the brains behind their actions. Unfortunately those brains do not reside in their own skulls.

4) The Good Intentioned (The GI)

Many people fall in this category. I’ve found most people to sometimes have wise, intelligent, optimistic, problem solving advice. If you listen to them, they can save you a lot of headaches or at least give you another perspective that you must know about.

Yes, it takes discernment. However, if a person has a good heart and I understand their motivations I can at least listen to them with an open mind (unlike the first three.)

But these are not the people who are usually wagging their finger at the front of a room trying to get everyone to look at them and admire them. They don’t usually solicit advice, often they are waiting to be asked.

My mom calls these people “the salt of the earth” and that is what I wish to be.

I am who I am. Sometimes I’m wrong, sometimes I’m right, and most of the time I’m just trying to do my best.

Recently, my family has simply changed their schedules, pitched in and helped me, and done so many things as I’ve carved out time to write my book that will be coming out this fall. They encourage me. We’ve scratched our heads as this blog has risen to the 8,000 range on Technorati.

But they are the optimistic, encouraging, baking soda that will help me rise higher.

Are they always positive? No, we all have bad days. But, I know when they are having a bad day and I try to sympathize and tune it out!

In order to rise to great heights, I find that I have to watch out for the first three types of people and do what I can to not be SNIOP (susceptible to the negative influence of other people).

I will push ahead. Pray ahead. Dream ahead. Forge ahead! I will not be limited by what critics say I can and cannot do. I will pursue excellence in my classroom that fits with all of the research I am learning about in staff development. I will push my own limits and knowledge and explore past the boundaries that have limited me in the past.

Then, take ownership of your own attitude. No one MAKES you angry or upset or depressed. I teach this formula to my students when discussing this:

It reads like this: Responsible means you are able to have a positive response.

This is your life. You have one of them. You will be a young biscuit rising on the counter and 15 minutes and 70 years later you’ll be baked. If you forget to rise, you WILL be baked in a squat.

6 thoughts on “Watch who you listen to or you’ll end up baked in a squat!”