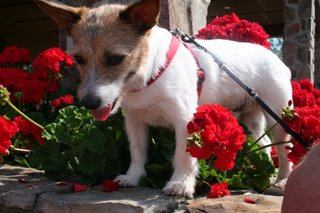 This is often how I feel. Like my Dad’s dog, “Doc,” among the geraniums. I am in classes and my students amaze me. They are like beautiful flowers, and I feel sometimes, well, like visitor among the flowers. Here are two of the most amazing discussions I’ve had this week. 1) A total refutation of the classification of “PC” and “Mac” Our computer science textbook was published in August and actually has a 2007 copyright (how do they do that?) It is a College Level Thompson publishing book and incredible in every way, but it is amazing how quickly a textbook can be outdated. We were discussing the textbook’s assertion that there are basically two genres of computer: PC and Mac.

PC is defined as the IBM-descended Windows Operating System computers and Mac’s being the Apple brand of products. This has been easy to do in the past because there has traditionally been little cross platform compatibility. Our floppy disks and computer CD’s have been branded with “PC” and “Mac” for at least a decade. One of my students piped up with a question (We teach Socratically so they love to quiz me) similar to this:

Wow! With one question, this student has taught me. Perhaps this classification of PC and Mac is truly becoming irrelevant, or perhaps we just need better ways to discuss and classify computers? I have a feeling the OS (operating system) is now more important than the hardware (platform.) 2) The dynamics of change and a Robotic Lawnmower

If you want to truly discuss technology and change, use the Robomower as a case study. When I asked my question of the week, I had no idea, the explosion of discussion I would ignite.

Computer Science Question of the Week
Robomower (See http://www.friendlyrobotics.com/) is beginning to sell more rapidly in the United States.

The goal of the owners is to capture 10% of the lawnmower market in the United States. Read about the Robo mower and answer the following questions in complete sentences. You should have three paragraphs as follows:

1) Is the Robomower a computer? Why or why not?
2) If it is a computer, what classification should it be? Why?
3) What will be their biggest obstacles to overcome for people to consider buying these robomowers? (At least 3 sentences)

While in study hall, several of the students came in to answer their question on classblogmeister. One of them turned to me angrily and said:

“I will never, mark my words, never use a robotic mower on my lawn in my entire life.”

“Woah,” I told the student, “now lets think about that. Never?”

“Well, actually,” he said, “It is a great innovation for some people, just not for me. My system works fine now.”

“Well, my Dad pays me to mow the grass.”

As other students chimed in, all of the obstacles of change that emerge with adults crystallized clearly!

Here is what I saw in their reaction:

I discussed it with them and said, “now wait, what do adults say about why they want to listen to records or Cd’s instead of an MP3 player? Or how about the robotics on a factory floor that replaced workers but allow you to have an MP3 player that costs less than $100!”

Teaching the ability to adapt to change

We are going to discuss this more tomorrow. I want them to understand change and the need to adapt to it!

Change or opportunity?
What if this teenager decided to become the robomower expert and helped people set them up and serviced them monthly by sharpening the blade? In the same amount of time it takes to mow the grass, he could service more lawns and thus make more money!

I think that this class and I may have to pull out the old classic Who Moved My Cheese a book that I read several years a go with a senior class that I had that was resistant to change. That class ended up making the best transition into the real world of any class I’ve ever taught.

So, we will discuss these two items in greater detail with the entire class tomorrow. I want to talk about change.

I believe that there are only two types of people who emerge when dealing with any change: victims and victors. That is about it.

Eventually all sweeping changes will effect each of us in one way or the other. If someone says, “That change won’t affect me,” then they are heading down the path to becoming a victim.

When they say, “I’ll never do that,” they become rigid and miss opportunities.

When they say, “I’m opposed to that because I will lose money,” they will end up losing money to someone who saw opportunity in the threat of inevitable change.

I want to teach them to say, “Hmmm, I’ve never thought about that. Let me think about it a while and see what I think.” That opens the doors for progress.

How do you “Make” people change?

The only way to make a person change is for them to choose it. My Dad says, “You cannot push anyone up a ladder.”

Today’s flexible teens will become tomorrow’s inflexible adults without someone teaching them how to recognize, understand, and capitalize on change.

How educators become the victim of change

Educators who have taught the same way for the last thirty years or last five years for that matter, are resisting change. They will become the victims of change if they allow themselves to become unengaged with their students and irrelevant to their lives.

Educators who fight technology rather than harness it become victims of change as they struggle with students who have surpassed them in technical prowess.

Educators who try to filter, restrict, and limit students rather than teach ethics, character, and responsibility, WILL lose. Teach children how they should behave and then HOLD THEM ACCOUNTABLE! The students will go to workfriendly.net and surf the net while you think they are in a Word document. They will learn how to hack around your firewall. Unless you teach them the ethics of computing, by avoiding the topic, you are creating headaches for yourself that Advil won’t fix.

Educators who try to shelter students from social networking without teaching them safety, privacy, and ethics, will have to live through the heartache of seeing their children victimized. Ignorance breeds victims. Knowledge and a willingness to change breeds victors.

Help our children be victors

My students are a delight and joy! What did yours teach you today?