David Petro has been using Twitter for his math PD for more than eight years. Learn about the current trends in hashtag learning and the popular techniques for harvesting learning from this social network. 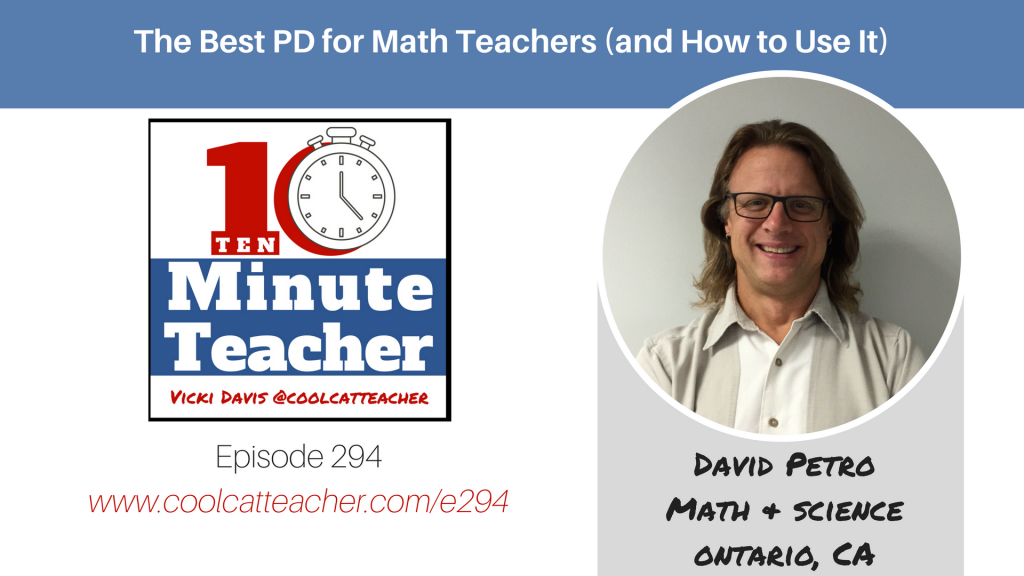 On April 26, celebrate PowerofEcon on Twitter with Discovery Education, CME Group, and their Econ Essentials Program. We’ll have free resources available for downloading. To join the celebration, tune into the Twitter chat with me, fellow teachers, and the CME Group’s chief economist on April 26th at noon Eastern Time, using #PowerofEcon.

Visit www.coolcatteacher.com/econ for more information and remember to tweet out your pics about how you teach your students using #PowerofEcon.

The Best PD for Math Teachers (and How to Use It)

Now, David, you have a real belief about the best PD that you have ever had. What is it?

David: I’d like to say the best PDs I’ve had — and have been using for almost eight or nine years now — has been, Twitter, in fact.

To me, Twitter is more than a place that celebrities and politicians can share their thoughts. It turns out it’s actually a great place that educators meet and share what they’re doing in their classrooms.

Vicki: Now, all of us, me included, have gotten frustrated with Twitter because it’s not quite what it used to be. I could go in the airport and tweet out, “Hey, I’m in the Atlanta Airport, and then other friends would see it immediately, and we could meet up, and chat and have lunch.

It used to just be chronological, and you’d see everything. And now, we’re not seeing everything quite as much as we used to.

How are you getting around that problem?

Twitter is now different. How are you working around that?

David: I guess I kind of use Twitter differently.

I don’t use it, as a communication tool between people, at least not at first.

I use it to look for things that relate to education, and to do that I actually really focus more on hashtags instead of people. So I’m less worried about people following me or me following people. I instead worry about following hashtags.

So when I’m using Twitter, I’m using an app like Tweetdeck, and I’ve got my different hashtags lined up. I’m looking at what people are sending using those hashtags.

Vicki: OK, so what are your favorite hashtags, David?

What are your favorite hashtags?

David: Everyone has favorite hashtags, right?

So, I guess when I first started using Twitter, I thought #math would be a really great Twitter hashtag to follow, but it turns out there are a lot of people that don’t like math…

They’re happy to talk about it, and say lots of bad things about math on Twitter.

There’s a little bit of trial and error involved

That’s actually quite useful. That means that tweet has really got some meat to it.

It turns out there are lots of “chat” hashtags — #scichat and #edchat and #elemchat (elementary).

When people use those hashtags, they’re basically saying, “Hey! This tweet is about something to do with this thing. You might find it useful.”

Vicki: So do you have another favorite besides #mathchat?

So you named #elemchat and #scichat. What else?

David: You said we only have about 8-10 minutes…

Vicki: (laughs) Give us some, and tell us what they’re about.

David: I usually use “math” as the main focus of my Twitter presence, so some of the hashtags that I use besides #mathchat…

One of the most recent ones that has actually become quite popular is — and it’s kind of funny to say it — is #mtbos. Some people pronounce it #mtbos and that actually stands for the Math Twitter Blogosphere.

What that really means is that this is a community of teachers from around the world that have basically started using Twitter to communicate with each other to share their math journey, a look inside their classrooms, and at the same time have started blogging about what they have done.

So it’s a combination of looking at blogs and reading Twitter, and they’ve all sort of created this community of math teachers. You can pretty much be sure that if it has the #mtbos, there’s something about teaching math in that Twitter post.

More recently, there was a little bit of a brouhaha because — it’s a very cryptic hashtag, #mtbos. I think it might have been Dan Meyer @ddmeyer –I know he’s been on your show — who suggested changing the hashtag to #iteachmath.

David: And so that seems like a much more reasonable hashtag use. So #mtbos or #iteachmath are really also great hashtags to follow.

Another great hashtag is #iteachmath

Vicki: You know, the one thing about using a cryptic hashtag is that sometimes it does keep the spammers away, doesn’t it?

David: It does… It does.

Vicki: But it can also keep people — who might want to find it useful — away, too!

So that’s great, the conversations that you’re having.

Now are there any other ones that you recommend, that you find really useful?

David: In terms of hashtags, you have to really try stuff out.

I like using #scichat as well, because that one is related to science education. As a science consultant, I’m looking for that. There are all kinds of variants on hashtags. So even our people in the UK, they will use “maths” with an “s”…

Try variants of names of hashtags

David: So you just have to sort of try with variants.

It really does depend on what you are looking for.

Because I’m mostly dealing with math — that’s kind of where my focus has been — but you can actually just search on that thing called Google for educational hashtags. You wouldn’t believe the list that you’ll come up with.

So David, tell us a story.

Tell us a story about something that’s happened that you found out about on Twitter, and it improved the classroom.

David: The perfect — if I can go back to the #mtbos — this is a grassroots group of teachers who actually started to create their own conference in the summer. They called it the Twitter Math Camp.

David: Do you know what a tweetup is?

David: That’s when you physically meet the people you know on Twitter.

So they’ve developed this huge tweetup where they meet at someplace in North America every summer for four days, and they talk about math. They have a regular conference, only it’s super grassroots.

It’s interesting, because last year I actually went to my first Twitter Math Camp, and I presented a topic with a teacher whom I’d never met before from California, only on Twitter. We actually presented a workshop together, and it was a really interesting experience to present with somebody cold that you’d actually never physically talked to before.

And so what did you take away from that, from Twitter Math Camp?

DId you get a lot of resources, a lot of ideas, or how do you compare it to the more formal math conferences you go to?

David: It was interesting, because I wasn’t sure what to expect from it. It turned out to be one of the best conferences I had ever been to, for myself. I think because those people who — it sounds kind of accusational, “those people” — are all just as geeked about math as I am.

So the depth with which we talked about topics went right into the night. It was a really, really great community to be a part of.

Vicki: Let’s finish up. A 30-second pep talk to math teachers on jumping in to Twitter for learning about math.

As long as you’re not looking for anything too specific, that feed is a really great place to find ideas that you’ve never thought of before, to teach math and to bring math alive for your kids everyday.

Yes, the algorithms have changed. Lots of us who’ve been around for a long time have complained about it. But you know what? There is still a lot of usefulness in Twitter. I still find it useful, even if it has changed from the “good old days” when I could actually meet a friend in the airport because I tweeted it out and they saw it on Twitter. (laughs)

Things do change on us, but we can still use these tools for awesome professional development. 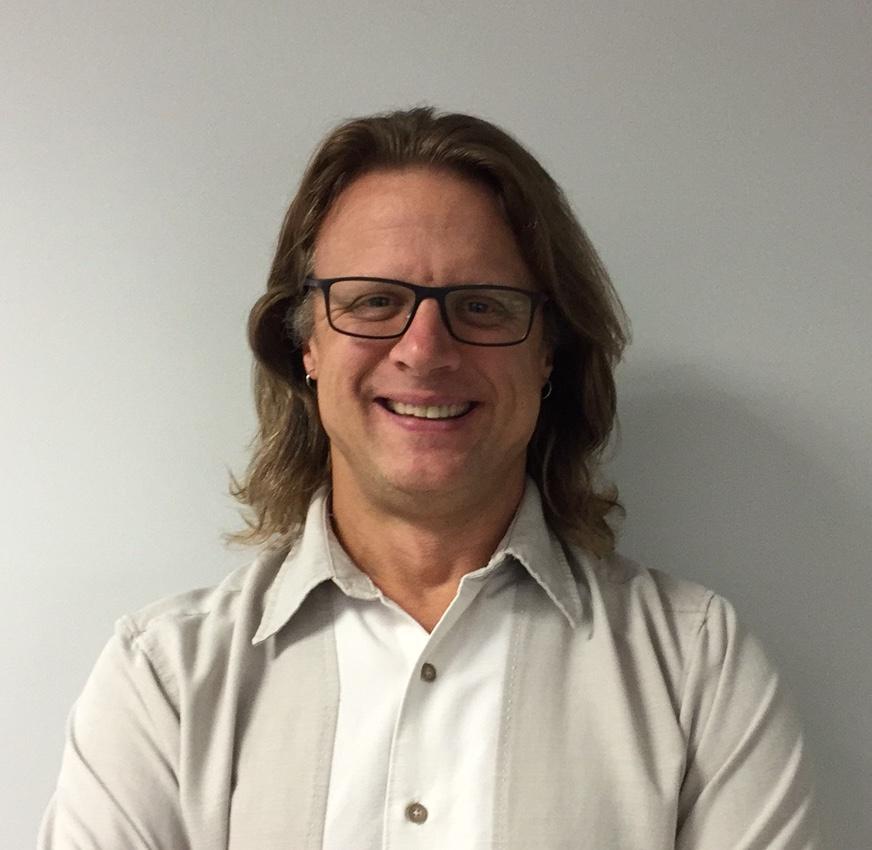 David is a Math & Science consultant at the Windsor-Essex Catholic DSB. He is a big advocate of sharing resources (and getting free stuff), online PLCs and maximizing the power of the hashtag. He a contributing author of several secondary math textbooks and the president-elect of the Ontario Association for Mathematics Education (OAME). He can be found sharing the math resources he finds weekly at http://ontariomath.blogspot.ca/, sharing the data sets he likes at http://found-data.blogspot.ca/ and sharing the activities he's created at http://engaging-math.blogspot.ca/. When he's not sharing he's either swimming, biking or running to get ready for his next Ironman triathlon.