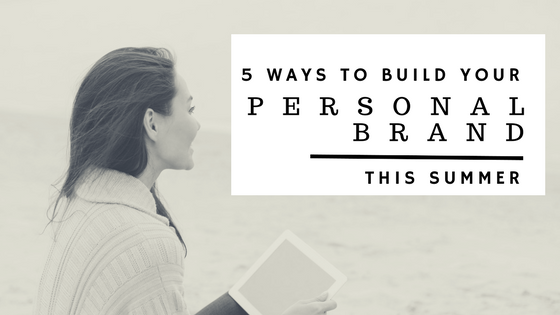 5 Ideas to Build Your Personal Brand This Summer

And a lot of you this summer are going to be working on your personal brand. Now, whether you think you have a brand or not, you do. And I know it’s kind of frustrating because some people just don’t want to have a brand. And if that’s you, that’s okay. But at some point, you’re going to want to change careers, or somebody is going to look at your body of work. And I think that we all need a professional body of work online. So there are five different things I’d like to encourage you as you think about your personal brand.

1 – Tell a Story that is Uniquely Yours

First of all, this year, when I was working with our valedictorian and salutatorian on their speeches for graduation, I asked each of them, and I said,

“What is the story that you can uniquely tell?”

Now, our salutatorian is such a great young man, and he actually stood up and said,

Because when he was in first grade, his parents had tried to move him to another school, and he had chosen to stand up for half a day. Talk about conscientious objector, a little-bitty first-grader, said it wasn’t his school, it wasn’t his desk; he wasn’t going to sit down. Perfectly respectful to all the adults. But eventually, his mom got in, brought him back to my school where he was. And so his whole speech was about standing for something, and that his whole life changed that day where he stood up for what he believed in. Then, he proceeded to tell about how every single person in the class stood for something.

And I’ve had people send me lovely, “helpful” emails and say,

“You know what; you sound like Holly Hunter. You need to get rid of your accent.”

Well, you know what; my accent is me. And I'd have to fight like the third monkey on Noah’s gangplank to get rid of it! And, yes, that’s a Southern colloquialism.

And I’m from “down South” here in America, and I’m going to own it. That’s me. It’s who I am. Some people will like it; some people won’t.

TIP #1: I have found that the people who do best with their personal brand just own who they are and they’re okay with it.

I think the second thing is, as you think about your career and your personal brand, be careful about getting too hung up on lists. Sometimes I’ll end up on one list of great bloggers, and then I’ll be left off another one. And used to; I would just let it roll me up like a rollercoaster. I’d be up down, up down, up down.

And you know what; I didn’t feel any different than I did when I had two Twitter followers. There was no more validation, no more. I still had the same insecurities. I’m still just me. I’m still just Vicki Davis.

And I didn’t feel any different. And now I have 143,000 followers, and I still don’t feel any different, except sometimes I just feel really overwhelmed because I wonder like, “what on earth is this?” And I know certainly 143,000 people aren’t looking at all of my tweets.

But the strategy that I’ve adopted is to not play king of the hill. My strategy is to make a bigger hill. When I suddenly realized that a lot of people were reading my blog, and now a lot of people listening to my podcast, my second podcast as well as the first, I realized, you know what; there’s a lot of amazing educators out there that people haven’t found yet.

And one of my favorite podcasts of this whole season has been the podcast with special needs teacher Karen McCallum because she doesn’t have a Twitter; she doesn’t have a Blog. And it’s one of the most popular shows of the whole season because she was using puppets to help kids with special needs in first grade, and it was just so awesome. It was so endearing. And to me, that gives me meaning, when I make a bigger hill when I find these teachers that people have never heard of yet because there’s more than enough room. Oh, my goodness.

And when I see people who present – and I’ll have to admit; there was a time period where I was taking in by it. That is the thing about the blogosphere; it’s a lot of great things, but the negative thing is it’s a whole lot of flattery.

So if somebody ever tells you you’re a rock star, don’t believe them unless you’re wearing leather pants and you can sing like Def Leppard or something.

But I don’t wear leather pants, and that’s not me. So just make a bigger hill.

I think the other thing that I realized, the third thing is that we all make mistakes; and when you make them, own it.

Well, I thought about deleting the blog post, but then I realized I needed to go into the strike-throughs and use it as a teachable moment to explain to others what is a parody website, and then also just be transparent about it because people have to believe what I write. So if I mess up and do a face plant, I have just to own it.

So there have been times I have posted fake news, and I don’t usually delete it. I usually go in there, and I edit it, and I say, I messed up; here is how I could have done better to do it right the first time. There’s a whole lot of humility, I guess, that comes from that. But when I see people who are perfect, I know they’re lying because nobody is perfect. And that’s just the truth.

Be ok with your imperfections. Learn from them. Be “transparent” by turning mistakes into teachable moments. You might find that your honesty is refreshing in a world of people who pretend to be perfect.

I think the other thing, the fourth thing, is to really look at your habits because your habits make you who you are.

I am super strategic about my habits. I mean, how else can Kip and I produce a five-day a week show like we do without having strategic habits?

I have a list of what I call “idea buckets.” These are the things that I want to cover, or include. So I’ll tell Lisa Durff who does all the research for the show; I’ll say,

“okay, we haven’t had enough in science,” or

“I’m fascinated about peer review”, or

“I think that we haven’t had enough on this particular topic that’s coming out in the research,”

and we really try to be the voice that we feel like needs to be out there, based on the research and what we’re reading. We’re trying to bring the classroom together with all the research.

And that’s just the right way to do that so that I can be focused on my students and not be a hypocrite, but still, have habits that will put great information out there. Because when I got serious about this and realized, you know what; I can do this, I can help pay for my kids for college, it can be a habit, it can help me get awesome, great things for my classroom, but I don’t have a lot of time.

I mean, I’m a mom of three, a wife of one, I have all these students, and just very, very busy person. So I just have to be real strategic about the habits. And so think about yours too.

Tip #4: Be strategic about your habits and tools so that your social media use reflects who you are as a person.

And I think the last thing is that we all have to change and grow. If you’ve been listening to me very long, you know that I believe in innovating like a turtle. And that means I always have my list of my next three things I’m going to learn. I like to take slow, steady steps forward. I set two to three times a week to learn new things for about 15 minutes each time. But then also, for a turtle to walk, the turtle has to stick its neck out.

And so sometimes I have to stick my neck out, and I get afraid. I get scared when I’m trying new things. I mean, when we created MAD about Mattering, I was scared to death. All the global projects I’ve worked with are scary. But when you change, and you grow, you are putting yourself out there; you are the kind of person that people may notice. And you may do things well sometimes and other times you may not.

Tip #5: Keep a short list of three things that you want to investigate. Take 15 minutes two or three times a week to learn new things. Work to improve slowly but steadily. Make improvement part of your weekly habits.

But I think part of having a brand or being a person, really, that people can trust is that you’re a real person.

And I just want to encourage you to be your authentic you. There are other people out here who are going to be bloggers or podcasters, and everybody will know your name in five years if that’s important to you.

I don’t even fantasize or think that everybody knows my name or ever will know my name. It’s just not realistic. But question I ask myself about people who listen to or ready my stuff, whether they remember my name or not include:

And that’s meaning for me.

So now the question, I guess, for you is what’s the meaning for you?