Where I want to be

Home » Uncategorized » Where I want to be

It is 9:02 pm on Friday night, October 12, 2012 and it is Homecoming at Westwood. I'm on a plane to New Jersey getting ready to give a speech at the school of a person I admire very much, Eric Sheninger, a speech I agreed to give long before the football schedule was announced.

Last week I was told this night was also senior night and that parents would escort their senior football players onto the field as they are announced to the cheering stands. I would be in the air between Albany and Atlanta during that time on the first leg of my flight.

There is more than just a promise and contract here, on Monday, October 15, taxes are due. This speech and a tiny bit Kip and I saved up are what we need for taxes. Every speck of money I've earned in the past year has gone to whittle down a whopping debt due to an unexpected job situation several years a go. I need this speech to write that check on Monday.

So, by the time I got to Atlanta, I knew that my husband and my father — my son's “Poppa” would escort him onto the field. I'd already told the announcer and everyone that I wouldn't be there so hopefully it wouldn't be awkward.

As I sat down to eat my taco salad by the baby grand piano, the pianist looked at me and began playing “Memory” from CATS. If I could have rolled my eyes at myself, I would have as I sniffled just a bit between bites. 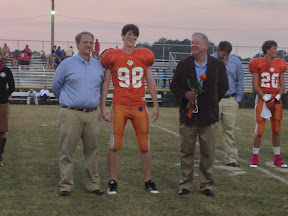 Then I got it, the text message with a photo from my sister — they had given my son a flower to give his Mom — a flower that my Dad held proudly (somewhat awkwardly perhaps) and my husband beamed proudly at his arm. They were all beaming – my son looked even taller than his towering 6'6″ frame already is. They had their moment, so then I had mine. I wept. Tearing up, I didn't want to blubber in front of anyone, so I sort of used my napkin and sniffed and wiped my eyes as if I had eaten some hot sauce or something. No one noticed me. It just wasn't where I wanted to be.

But then, I just had to reflect all the times I was there. I was a stay at home mom when he was 1 until he was 8 and then took a job at the school to be near him. I've been at his school to see him grow up and learn. I taught him to type and computer science. I even took him to China to the Flat Classroom Conference a few years a go and we walked on the Great Wall together. I'm here every day and bought a fridge at school to stock water so he can grab a cold one during the day. I stock pencils and paper so he has that too. I've been here for just about everything in his life. So, why did this one night hurt so bad? Why was I so wounded?

I guess I just want to be there for EVERYTHING. Now that he's a senior, every moment is precious. Each sand that drops through the hourglass is grain that floats into oblivion through my grasping fingers. I want him to shrink and let me throw him onto my hip again as we play outside with our dog Crash (long since gone on to that doghouse in the sky.) I want to go back and do science experiments and bake cookies on cold winter days. I want to study with him again for his first test and read Narnia aloud as we go on family trips to try to help the kids find books they love -so they'd read.

Time is passing and EVERY moment is precious… but it always has been … just now that there are less of those moments, each moment magnifies in its glory and potential memory.

But I can't go back… time only moves in forward motion and I can't back it up. It doesn't work that way. So, I'm here at 9:15 pm on the bumpy plane watching stewards come through the cabin while trying to hold onto the seats and serve drinks without pouring them in the laps of thirsty passengers. I'm just not where I want to be right now.

So, although I'm not the place I want to be, this is life and life happens. I have healthy children and although I don't know the score of the Homecoming game or if my son is playing well and has sacked the quarterback again, I do have a son and he has a Mom. I have a husband and two more children who will be here after this year. And it isn't like I'm sending him off forever. He's going off to college, but that is as it should be. We're driving each other crazy anyway. He's ready and we are too.

These are the thoughts of a parent of a child about to graduate from high school. Full of self doubt, what ifs, and tears. I might just burst into tears at any time, like the other day as I looked at his favorite kind of Fruit Rollups (he doesn't eat them any more) although I do a pretty good job hiding those tears if it happens. I prefer to keep it to myself. It seems like a pretty sad thing to have such pity parties and I don't like them.

I have a wonderful son and am blessed to have been given him to raise. He's not perfect but I'm far from it. We've had to forgive each other a lot but we've also laughed a lot and had a great time too.

This is my son in whom I am well pleased. Tonight, I am where I should be… keeping a promise to a friend and using this opportunity to pay a bill that needs to be paid. Life isn't all about doing what you want to do. Besides, I've turned down that speech in January and another in February and a trip to Japan in March. I'm going to be here the rest of the year and have no regrets. If this is the only regret I have from this year full of memories, then I'll be doing well because I don't think any parent is ever there enough for these moments.

So, now, I'm going to smell the Biscoff cookies the person next to me is eating (that I'm not going to eat) and review my 21st Century Influencer presentation just one more time and then settle back knowing that I may not be where I want to be, but I'm in the right place for where I should be at this moment in time. I pray that missing this one thing that my son will recall all the times I have been there and know that his Mom may be flying over Virginia right now but that I love him with all my heart and would be there if I could. I'm going to give the speech of my life, worthy for missing such a moment as this –because if the good Lord has taken me and put me here, I know Him well enough to know that He has me here for a very good reason. I'm going to give all I have.

Goodnight friends and thanks for reading the thoughts of a Mom missing her child… missing tonight and already missing him for what I know is coming. Because I may always want to be with him, but it is for the best that I let him go.

To all you parents out there who know exactly what this feels like… here's to you. We've spent lots of nights with sick kids, waiting up for kids who missed curfew, and wrapping presents for Christmas. We've planned birthday parties and sat in doctor's offices and stirred brownie batter. We've changed diapers and held hands and sung songs. I guess I could break into a rendition of “Days in the Sun” but that is enough.

I'm proud of you, son. Mama would be there if she could tonight. I love you with all my heart. I dedicate my speech tomorrow in your honor. May it be one of the best I've ever given. Goodnight.

All Posts »
PrevPreviousDaily Education and Technology News for Schools 10/11/2012
NextTeach This! Teaching with lesson plans and ideas that rock 10/13/2012Next