1. Kodu Game Lab
This handy Game lab that lets you design X-box style games on your PC. (There is also a Kodu game for the X-box.) I find it interesting that the installation DOES NOT require admin privileges on the computer. 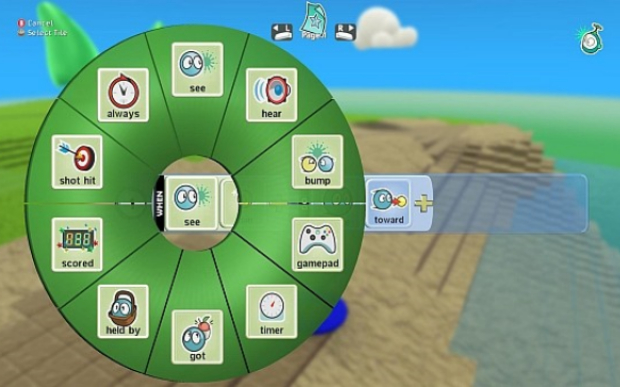 The Kodu Cup ( a pet project Microsoft Computer Science blogger Alfred Thompson) is a competition from Microsoft with a whopping $5K prize for the school and student creating the best game.

The reason this is my #1 favorite is that it has changed the life of my daughter. I’ve always known she was good at technology but she’s never found anything that really sparked her interest. She was inhaled with Kodu Game Lab from the moment she opened it as part of the Digiteen Action project her team is doing and started writing video games after barely out of the tutorial. Kodu isn’t super-simple and yet in some ways it is when you have a bent in this direction. She made several games and finally created “Coin Dozer”  and we’ve installed it on the other computers in the lab. They are using it to teach mouse and arrow key functions to kindergarteners as part of their project that will teach technology and digital literacy to kindergarteners.

Cost: Free
It is free and I think every computer lab should install this and that parents who have gamers at home that they wish would consider programming should put this on their home computer and encourage their kids to play around.

Yes, the super cool Kinect device for the Xbox is headed to Windows. I’m quite fascinated by the potential to use this to navigate the Microsoft World Wide Telescope (if light conditions will allow it.) We’ll see some interesting things here. The demo video shot by “Channel 9” has some cool things.

One of my favorite things from MSIEF in South Africa was the time spent with the people running this program. You can make a homemade planetarium for your school and use a simple projector with an inexpensive mirror and your kids can navigate and explore the stars in ways that your local planetarium cannot begin to allow. All this for less than a thousand BUT the World Wide telescope is FREE.

I think that shop classes should be building these and that schools strapped for funds in their science programs should definitely download. Every science teacher covering astronomy needs this on their computer. Comparable to Google Sky and yet it is far beyond what Sky can do. Try it and download it.

Cost for Software: Free
Homemade Planetarium: Around $500 plus some building know how and a ton of binder clips. 😉 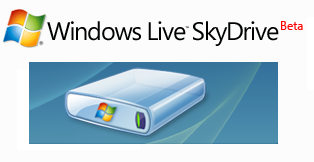 Windows Sky  Drive is incredibly useful for teams using Microsoft Office products. While I liked the way that it’s predecessor, Microsoft Office Live, interacted with Office, I’m getting used to this. Although simultaneous editing isn’t allowed, it DOES allow one to edit a document through the web browser.

This means that if your student doesn’t have office at home that they can have limited functionality to edit and work on the document from their web browser. This includes a whopping 25 GB of storage. I upload more than my powerpoints, etc.

Create team folders to share documents, etc. It is obvious that what Microsoft calls “cloud power” is part of their future strategy. I believe this will be good for all of us who use their operating systems and computers.

Every high school student and teacher should have one. Schools should create shared files. The advantage of this over Dropbox is that I find that this handles the sync process a little bit better. I’ve had dropbox get “unsyced” lately – if you’re not opening the latest copy, Skydrive will tell you! 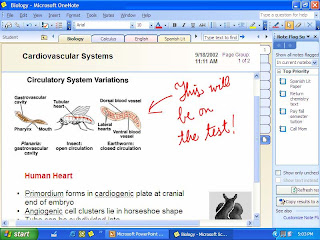 This gem is by far my favorite interactive white board tool bar none. When we are discussing topics that are tough (like binary number calculations) – I launch this program – capture my notes, links, recordings, and then easily print/ publish, and keep the notes. I have on my personal PD list to learn more about how to use One Note and publish notebooks to students. I’ve heard some incredible things from teachers who love it. I think it is an unsung wonder.

I love my Evernote but One Note is different. It is the most intuitive notetaking system for students that I’ve seen. I’m not really sure that Microsoft has really understood what a gem they have in this tool but they seem to be getting it. With the release of the OneNote app for my itouch and the One Note sync capabilities this is a super-powerful tool for business and schools – nothing even comes close.

You can grab screenshots (this feature was added to Powerpoint and Word 2010 but I saw it in One Note first.) You can also record the audio that goes along with the text. (I like the Livescribe pen best for this, but it is a handy feature.) There are tons of “to do list” features not available in Evernote (although the Egret List app lets you harvest the Evernote list feature – evernote itself doesn’t.) There are cool tagging and studying feature. Honestly no one else comes close.

6 – Windows 8 Touch Capabilities
I haven’t been excited about a Microsoft OS since Windows 3.1 and then 95. I was thrilled with the stability and deploy-ability of XP. Vista had some cool things. Windows 7 is really great – but has significant issues on my M90z touch screen computer. After talking to some of my inside sources and blogs, I am hugely excited about Windows 8 both for the touch capabilities and because I think Microsoft is back moving in exciting direction (of course brought on by the very competitive nature of technology today AND  economic struggles hitting everyone.) No longer resting on their laurels, I think they are becoming fierce competitors (again.)

This is the most diverse gathering of educators around the world that I have attended, largely because Microsoft flies the winners from their areas to the international competition. You get teachers in huts in africa with no electricity doing powerful things on cell phones, teachers from Arab countries collaborating and promoting peace and pride, and US educators like Pat Yongpradit who are interesting girls in computer science through after school game programming clubs. The closing ceremonies were so very touching. Some great work is being done through this program.

Cost: Your time to apply

8 – Windows Live Moviemaker
Some great improvements here, still not able to do chromakey and although iMovie smokes it, you can’t beat it for a free, easy to use Movie Making program for the PC.

9 – Free Teacher Tools
There are tons of free things that you can now get on their teacher website although some are add ins for existing programs.

10 – Alfred Thompson, my go-to Microsoft Blogger
Since I’m talking Microsoft, I have to put a word in for my friend Alfred Thompson. A big teddy-bear of a man, he was one of my first readers and commenters and has always genuinely been my friend before I was Cool Cat anything.

I sat with him at the first edubloggercon and we had great conversations. He has a talent for writing and is my go-to guy for anything Microsoft. The people at Microsoft will tell you that I am bullish on Alfred because he is the “real thing.” A real person with a heart for kids and the classroom and, quite honestly, a huge fan of the company he works for. The kind of “salt of the earth” guy who should be escalated and recognized for his talent and good heart. Follow Alfred on blog and Twitter. He is a great guy and a wonderful resource of information on Microsoft. I find his content “real.” I follow people not companies and he’s someone I trust.

There are a lot of other great bloggers for Microsoft – and he was kind to me (like David Warlick was) when I had nothing to offer but skin, bones, and a whole lot of questions. I have to put in a word for him because he loves real teachers and I gotta put my money on that kind of person.


A Note from Vicki about this post.
Lots of new things from the trusty, faithful things you’ve used for years.  Let’s not let the war between Microsoft, Google, Apple, Adobe, Facebook, et.al (expect posts about them in the future) keep us from looking deeply and breathing in the really cool innovations that are happening in these many places. The truth is, few of us are all in the camp of any one company – at least we shouldn’t be (unless we work for one of them.) There is room in the educational pond for many to make money and I’m of the opinion that competition benefits everyone. The exciting thing about education right now is that limited funds will force us to consider what REALLY works and start cutting out the fluff.


Full disclosure, Microsoft sent me to their incredible MSIEF (Microsoft Innovative Educator Forum) in South Africa last year. I do have friends at Microsoft. They do not pay me nor have they in any way. 😉

Share | Tweet | Share | Pin It | email
Category: Innovation
Disclosure of Material Connection: Some of the links in the post above are “affiliate links.” This means if you click on the link and purchase the item, I will receive an affiliate commission. Regardless, I only recommend products or services I use personally and believe will add value to my readers. I am disclosing this in accordance with the Federal Trade Commission’s 16 CFR, Part 255: “Guides Concerning the Use of Endorsements and Testimonials in Advertising.”