Here are my favorite Web 2.0 ways to experience the Summer Olympic games. 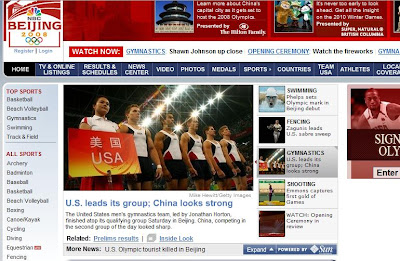 NBC Olympics has a really rockin' site to watch the Olympics.  On the left side of the page, you can see that the things that are live are marked as such.  To me, it is a much more robust way than using the clicker.

On the down side, news reports say that “many of the most popular events will not be streamed live” here in the US, where NBC owns exclusive rights.

If you're in other countries, Youtube is your official Olympics channel.  It is strange how this happened, but Cnet says:

“While NBC holds the Olympics digital video-on-demand rights in the U.S., rights have not been sold on an exclusive basis in more than 70 countries. In those countries, people can access the specialized YouTube Olympics channel youtube.com/beijing2008, starting on August 6.”

So, in this case, the US has to watch NBC, while the rest of the world gets youtube. In the US we're the victims of blocking now and NBC has got us where they want us.  (What a great time to point out the problems we're having with filtration in schools!) 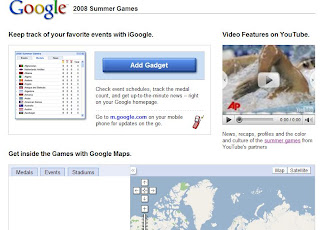 Google has an Olympics Widget for your iGoogle pageand also has a Google map as part of their offerings as well.  Make this part of your igoogle start page and you're set every time you hit your homepage.

My preferred way to “catch the news” about the Olympics is to check the Google Olympic News page which is a smooth uncluttered way to read.  (Of course, I can pull the individual feeds into my rss reader, but I just like the look of this much better — even better than the cluttered Nbc olympics news page.) Twitter search for the word Olympic will pretty much let you know what people are talking about.  I've added this to my rss reader as well just to keep my ear to the rails.  This is THE one place I'll check first for Olympics news.  (A grassroots way to keep an eye on the Olympics that also includes many major news outlets.)  And you don't have to be part of twitter to follow it!

There is also a Youtube Channel specifically for Olympic Coverage which will be a great place for instant replays.  This is a channel that we should be able to all access and already has quite a few videos.  On the downside, the start page itself is NOT for young eyes as I turned up a bit of profanity there.

(I wish that more people understood that poor behavior really limits access to many valuable services.  It is not just a decision that they make personally but it affects us all.)


Optional Olympic Bling For the Fanatic with Firefox

Several toolbars have emerged to add to firefox that will pull the Olympics to you.  I've checked out quite a few that are out there — be careful, some of them are just advertisements with 70% olympics, 30% ads.  You can do this in your own rss reader, so I'm not really sure why you need the bling.  Also, the page load time is very slow for the bivot toolbar, the one that seems to have the least amount of advertising.

If you've just gotta be there and can't fly to china.

Some are going to go to Second Life to “watch” the Olympics.  Just search the second life event forum if you wish to attend. (Some charge a “cover charge.”)

How is this useful?
Yes, the Olympics seem kind of small compared to many of the problems and other events with people losing their lives going on right now.  However, for those of us who are trying to help children and teachers understand the newest technologies of the Internet, one of the best ways to help them understand the instantaneous nature of RSS and its usefulness is to capitalize on things that interest them.  For my 13 and 12 year old, this is really the first Olympics that they remember and they care about, so it provides a rare teachable moment.  The moment they learn something FIRST on twitter or through their RSS reader, they understand the value and apply it to other parts of their lives.

Use the Olympics to teach and help them understand RSS.  I'm planning to move my RSS lesson up to this week and use the Olympics as my topic.  You've just seen the overview of what I'll share.

We'll also talk about blocking and filtration as issues where they are the ones that experience it!

Unfortunately, lack of understanding of Web 2.0 by mainstream media may limit the full potential for this Olympics to truly be Web 2 – but it is getting there. (Olympics 1.5?)

The Olympics is not only a cool sporting event but a great way to teach about cutting edge technology.

May I suggest a link related to the Beijing 2008 Olympic Games?

Please let me know if you want a link back.
Many thanks for your reply.

“Yes, the Olympics seem kind of small compared to many of the problems and other events with people losing their lives going on right now…”

But given all the bad things occurring, it’s wonderful to point to the Olympics as a positive focus. To show that there is much good in the world too.

“Has anyone found a good schedule for the Olympics?”

The Olympic toolbar by bivOt (mentioned above) has two gadgets called “TV & Online Listings” and “Results & Schedules” that are helpful.

The other gadgets are pretty cool too. There’s a Medal Counter, Slideshows and a Mini Olympics game that lets you compete in archery, weightlifting and diving.

I’m an Olympic junkie and I will enjoy checking these out. (Yes, I have teared up at more than one Morgan Freeman “Go World” commercial — good work Visa.)

Has anyone found a good schedule for the Olympics? The ones NBC has I find hard to read and figure out what I want to watch. Thanks for any help someone can send on!