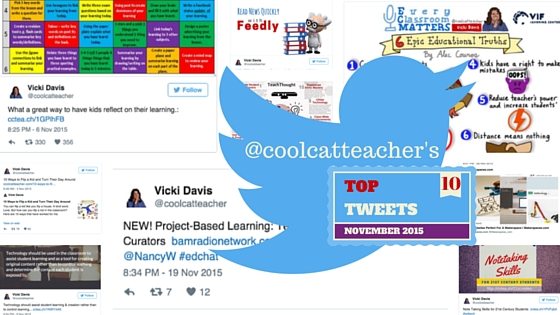 November was a busy month. Out of 758 tweets, these are the top 10 based on your retweets, shares, and click-throughs on Twitter Analytics. If you haven't checked out Twitter analytics yet, head on over to http://analytics.twitter.com

1. A graphic created by @ASTsupportAAli to help kids reflect on their learning

Some people love this plenary review grid and are using this with classes. Although, I was tweeted by an educator yesterday who said this was another way to “put more pressure on kids.” Of course, the point is well taken.

Any tool can be used well or not so well, in my opinion. I've seen poor teachers take a great idea and completely botch it with their students. Likewise, I've seen great teachers make magic with a mediocre lesson plan. It comes down to the teacher. The most innovative “technology” in education today isn't a device, it is a teacher.

Alec's show was listed yesterday as the top show on Every Classroom Matters in November. If you're traveling this November, you definitely want to download this one and listen.

I appreciate Alec's transparency as he reflects on the mistakes of his early teaching career and what he is still learning. Sylvia Duckworth added her magic to Alec's work and the result has turned into a helpful conversation about great teaching.

3. 10 Ways to Flip a Kid and Turn Their Day Around with Sketchnote from Sylvia Duckworth

Inspired by a comment by Kevin Honeycutt on Every Classroom Matters, this post was enhanced with a rocking sketchnote by Sylvia Duckworth.
This blog post was the top post of the month here on Cool Cat Teacher. It buoys my hope and thrills me that so many teachers are realizing their power to positively impact kids with their actions. Make it your goal to #flipakid every single day!

10 Ways to Flip a Kid and Turn Their Day Around https://t.co/dW6lF6evQA

I updated this blog post about how I read the news with Feedly. This is the lesson I also use with my ninth graders. When I tweaked it, I also added a cute graphic I made in Canva.

5. We need students to create, not be controlled by technology

Made this with Pablo, a cool tool from Buffer that lets you make a graphic with a click. I highlighted some profound text from this article, turned it into a graphic and linked to the article. Just install the Pablo extension. As you can see from the tweets so far, people tend to share tweets with graphics more than those with just text. Pablo helps you do that.

Technology should assist student learning & creation rather than to control learning… https://t.co/JR3DmiIm0x pic.twitter.com/5SdgChYFp5

This blog post was my second most popular of November. So many teachers hann Chromebooks or iPads to kids and say “take notes” but don't understand the best way to help kids take notes. Here's a lesson with videos I use with my students.

7. George Couros' rocked his keynote at Miami Device. Here was the most popular tweet from that session

“Social media is like water. You can either let us drown, or teach us to swim." a student of @gcouros #miamidevice

8. Nancy White reflects on her students as curators

Quite a bit of discussion has been surrounding Nancy's “army of retired educators” comment as she reflected on one project that worked well and another that didn't. Again, transparency and authenticity surround the comments that tend to trend on Twitter and educator circles.

9. 10 Strategies to Make Learning More Like a Game from TeachThought

Game based learning has been a hot topic in education circles. I had a blog post in the top 10 on this topic. This tweet features a fantastic graphic from TeachThought.

10. Maker Websites that are Great for Makerspaces

Maker spaces rock. Many schools are building and creating them.

Maker Websites That Are Great For Makerspaces https://t.co/rCIjgIe6OH

Thank you, dear friends for teaching me so much. I may not respond to every tweet (it depends on the craziness of the day) but I read every single one of them. You make this list and you have chosen well!

Thanks Cool Cat – some great tweets here. Liked Feedly and Buffer especially. Makerspace I don’t know much about so I’ll check that too. Appreciate the time you take to share these things!

Thanks for dropping by, Warren. Makerspaces are moving into so many schools. Kevin Jarrett writes some great work on his blog and edutopia about the cutting edge of makerspace.