A subtle shift is happening in language as seen in the top education tweets this week. After we've gone down enough techno-innovation-as-Savior trails and found them to be dead ends, it seems many in education are circling back to one simple point: the greatest innovative force in the classroom is an innovative teacher. Why? Because they can unleash innovative students. And when they do, the force is transformational, transcendent, and awe-inspiring. It is what we must do.

It seems everyone is trying to sell us something to fix education but we need to buy into the fact that the fix is us. #miamidevice 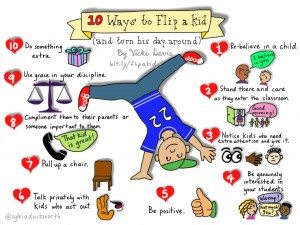 10 Ways to Flip a Kid – Sketchnote by @sylviaduckworth was the top shared graphic this week from this blog.

Miami Device was awesome. Yes, I was at Miami Device this week and have come back both exhausted and energized. Spending time with my dear friend Angela Maiers and hearing how she not only spends time in teacher workshops but also spends time with STUDENTS helping unleash their creativity on work that matters: that, my friends, is energizing. Thanks Felix Jacomino for the invitation to join the celebration.

People are the Power. So, this week's top tweets do have some tools, but they also seem to include this renegade idea that PEOPLE are the POWER of change. We begin transforming our schools and classrooms when we transform our ATTITUDE. And we should realize “I” — the letter and me as a person — is at the center of ATT-I-TUDE.

Twitter Analytics. Whether you're on Twitter or not, I hope this week's tweets of the week give you inspiration and education. For those of you who are asking, I'm pulling these from Twitter analytics. To get started, go to https://analytics.twitter.com/ and sign in with your account. You don't have to run paid advertising to use it.

For France. Meanwhile, my heart breaks and aches for the people of France but also for all countries hit by terrorism. Those whose purpose in life is to end the lives of others should take their proper place in the despicable ranks of Hitler's SS and those whose joy it is to cause others to suffer. As teachers, we must remember the importance of our job. As my teacher friend Russel Tarr (creator of Classtools.net) from France reminded me on Facebook last night,

“We need to remind our students that the people doing these horrific things are the same people that refugees are running away from.”

I have no platitudes or great words for you, dear teachers. Only to say this: We cannot help the times in which we live, only the way in which we live the times. (a riff on Tolkien's old wizard Gandalf) Such words have never been truer.
Just remember this, teacher, you may have been through 9/11 or disaster or heartbreak. You may have been through lots of things but for some of the kids in your classrooms, this is the first time FOR THEM. They want to talk. They want to seek wise advice. And while you cannot give them the answers they seek (as I am not sure anyone on this terrestrial ball can) you can embrace the humanity of the suit of flesh they wear that longs for peace and cries when people bury those they love because senseless hatred. (You may want to read the story of the Cellist of Sarajevo to them and remind them to make their music.)

Kids need to know they matter. Each person on this planet matters. Each life is precious. This is not a video game. To see lives wasted like this is truly the greatest heartbreak of them all. I weep.

[callout]Correction: I also want to give a shout out to @ASTsupportAAli who has let me know that he created the chart shared on last week's top Tweet of the week. I didn't have his handle when I found the graphic, so I'm adding it now to last week's top Education Tweets post and this one. [/callout]

Technology should assist student learning & creation rather than to control learning… https://t.co/JR3DmiIm0x pic.twitter.com/5SdgChYFp5

2. You can Flip a Kid: Sketchnote by Sylvia Duckworth

Sylvia Duckworth sketchnoted 10 Ways to Flip a Kid and Turn Their Day Around, a post rapidly becoming one of the top posts of the year. Teachers are sharing how they are flipping a kid's day on Facebook and tweeting what they are doing. Shout out to Lisa Parisi who shared on Facebook that she complimented a kids haircut and the child said, “you're the only one all day who noticed.” Be the noticer. Be the one who pays attention. Love kids. Follow Sam Walton's 10 foot rule, say hello by name to anyone who comes within 10 feet of you during the day. If you don't know their name, ask someone and use it next time. Master teachers master relationships. Kids are worth the effort.

NEW SKETCHNOTE by @sylviaduckworth – 10 Ways to Flip a Kid and Turn Their Day Around https://t.co/IukY4ElL3L pic.twitter.com/R4TI9bDDKM

Shelly Sanchez Terrell is awesome. Take a look at her 30 goals book. Shelly's a wildly helpful, must follow on Twitter. @shellterrell

4. We want to be remembered. A community post over at @edutopia

What Students Remember Most About Teachers https://t.co/RD6aF7fQEP

5. Many are looking to curate content for their teams. This link shows you how.

6. My Sunday morning post about the prior hot blog posts of the week.

8. We all need motivation during November

9. A little rant. I guess other people struggle like I do. We encounter unhappy people but we have to refuse to let them steal our joy.

I will not let the lack of joy in others evaporate mine in the heat of their fervor to be unhappy.

10. My top tweet from Miami Device. Having kids as social media interns is an AMAZING idea!

WOW: @TonySinanis has kids who are "social media" interns for the class each week & work with adults to capture the class. #miamidevice

[callout]I was asked last week in the comments how I determine what is educational. Well, for example, this week, I tweeted a short video of an ambulance on the tarmac of the Atlanta airport. Quite a few people clicked and viewed that video. It showed up in the top 10 this week. I didn't include it on this list because, in my opinion, that is not educational in nature. The impact of the tweets also includes click-throughs, something you cannot see in retweets and likes. Be wary of thinking that the most important stuff on Twitter always has lots of likes and clicks – sometimes it is just helpful and people click the link. Sharing this list is part of my experiment to bring the goodness of Twitter to all of my dear friends out there who either cannot use Twitter or at this point, do not yet want to use it. [/callout]