The Cellist of the Schoolyard

Home » Uncategorized » The Cellist of the Schoolyard 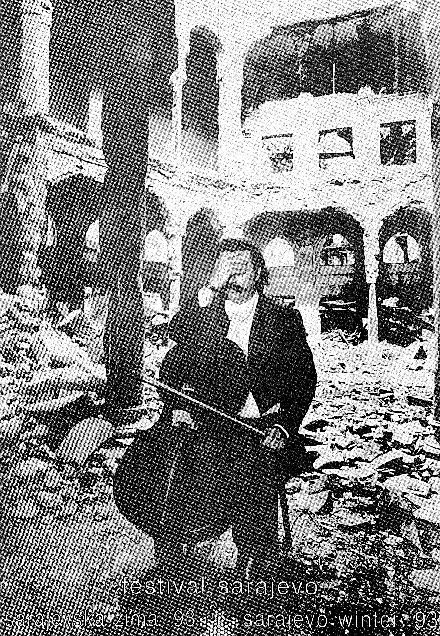 inspired the song “The Cellist of Sarajevo.”  There is such a powerful story in what this man did.

Thirty seven year old Smailovic, principal cellist of the Sarajevo Opera, was heartbroken at the bombing and massacre that had occurred in his precious city in 1992.  A city that was now being called the “capital of hell” and rightly so, for on May 27, a long breadline of citizens waited in front of one of the last bakeries in town as a mortar landed, exploding and killing twenty two people.

This was outside Smailovic's window.

Instead of white bread for the masses to eat with their red meat,  there were white bones and bloody flesh scattered everywhere.

Smailovic knew.  It was outside his window and he saw it, scarring his mind and lapping up any naivety left that the horrors of his country could not come to his neighborhood.

As he stayed up that night, his anguished mind struggled to rescue his soul from the pit of despair.  How could he make a difference in a living hell?  What could he do?

The next day, he donned black.  Not the black of mourning, but the formal black of a musician of a prestigious opera company.  Twenty four hours after the massacre, at 4 pm in the afternoon, Smailovic settled his stool beside the still smoking crater.

And he began to play.

He continued to play every day at 4 pm for twenty two days – one for each person who died. He played through the rockets red glare and bombs bursting there beside him on the ground.

The citizens in the capital of hell received a heavenly emissary every day at 4pm.  One that reminded them of the good, beautiful things of life, and that there was hope that again peace would return.

His powerful testimony brought even more attention to the horrors around him.  This is quoted from a news report.

“Asked by a journalist whether he was not crazy doing what he was doing, Smailovic replied: “You ask me am I crazy for playing the cello, why do you not ask if they are not crazy for shelling Sarajevo!”

After twenty two days he moved his chair.  He moved his chair to other neighborhoods with freshly charred craters and fragments of humanity where souls had recently departed this earth.  He played in graveyards amidst the newly buried and muffled mourners.

He played until December 1993.

He had played to hold out hope to those who would listen.  He became the personal embodiment of hope for peace in Bosnia.  He dispensed hope in his music, he became hope to his people.

The next year, in 1994 famed cellist Yo-Yo Ma played a newly composed piece by English composer David Wilde at the International Cello Festival in Manchester, England.  The piece entitled “The Cellist of Sarajevo” haunted those who were there.

Pianist Paul Sullivan described it this way in Readers Digest:

“When he had finished, Ma remained bent over his cello, his bow resting on the strings.  No one in the hall moved or made a sound for a long time.  It was as though we had just witnessed that horrifying massacre ourselves.

Finally, Ma looked out across the audience and stretched out his hand, beckoning someone to the stage.  An indescribable electric shock swept over us as we realized who it was…

Smailovic rose from his seat and walked down the aisle as Ma left the stage to meet hin.  They flung their arms around each other … everyone in the hall erupted into a chaotic, emotional frenzy…

We were all strippped down to our starkest, deepest humanity at encountering this man who shook his cello in the face of bombs, death, and ruin, defying them all.” (Everyday Greatness – see refernces)

My heart is quiet.

It is as if the strings inside my vocal chords that make that dissonant sound – the sound of whining – those chords are suddenly broken.

Broken in two by the understanding that far worse things are happening in the world than my struggles to make ends meet, and put 26 hours into a 24 hour day.

And the vocal chords that share hope and goodness, and knowledge are strengthened because I feel so compelled that not only must I impart knowledge but I must share and teach things to prevent such things from happening as did in Sarajevo.

To lend my voice and empower my students to add their voice to the things that echo for the good in this world.

And guess what, teachers are stressed out too!  Admins!  Curriculum directors!  Librarians!  Tightening budgets mean we have to do more with less.

And we love our students ,which means we have a decision.

We have a choice.

We can see the carnage and problems – we can have a pity party and say we are in the midst of the capital of hell.

Or, we can take a bit of humility and perspective from a cellist who really has been to hell and realize that we have a choice, as we retreat into our homes at night and lock our doors and contemplate what we shall do on the morrow.  Surely our problems are far less.

We can't do a lot.  Some of us can blog.  Others can speak or sing.  Lots of us who can teach, encourage, and help others.

For, you see, a good teacher is like music in the life of a student.  A good manager / boss/ principal/ curriculum director / superintendant is too in the lives of their peers and subordinates.

So many times, life is not what we want it to be.  But we examine ourselves, see what we can do and then

we do what we can with all we have.

For, by playing our music – sometimes we become the only symbol of hope that others will see.

Kindness, love, a passionate love for knowledge, and a desire to impart the character that learns to respect other human beings goes a long way to helping prevent future Sarajevo's.

It goes a long way to giving hope and being the kind of person who makes a real difference in a school – the place where we desperately need unselfish difference makers.

If you give up, teachers, what music will there be in the lives of these kids?

If they have crabby parents and crabby teachers – no wonder they run screaming the other direction!

Good teachers get their charge, their energy, from truly helping others and making a difference.

And sometimes it means, brushing off that cello and getting out in the classroom and making beautiful music, despite the odds and cricitism.

The Cellist of Sarajevo. Live Positive.

Paul Sullivan.  “The Cellist of Sarajevo”

All Posts »
PrevPreviousClassroom Instruction that Works Live Blog with Dr. Shephard
NextDaily Spotlight on Education 01/06/2009Next

Thank you for your morning posts. It is a postive start to the day as I sit at my desk at school. Life can be hard but you must continue to keep going and never give up. My wife has just been diagnosed with breast cancer and we are battling through it. Remember to enjoy the good times with friends and family.

Oh, Marc, I’m so sorry for what you’re battling through and appreciate so much that you are able to encourage me and others to enjoy the good times with friends and family and to take the time to encourage others. Oh, I pray so hard at this moment for wisdom, guidance, and peace for you both. Keep on plugging ahead.