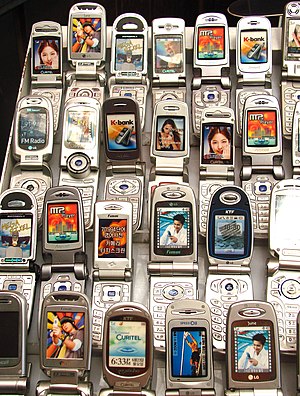 Image via WikipediaThe Dealia's swimsuit catalog came in the mail for my teenage daughter and I handed it to my youngest son and asked him to take it to her. He padded in the den and I heard him say,

“Here's your bathing suit catalog, sis. Pick something that won't scar me for life!”

Scarred for life? lol. Hmmmm. Not a joke if I think about it.

Scarred for Life.
As I listened to my book on iPod and cleaned the kitchen, I started thinking that that is what is happening to many of today's teens.

We have driver's education because we want to protect kids from themselves. A car is a powerful machine and can kill.

We have sex education because we want to protect children as well. Sex is a very intimate thing that shouldn't be taken lightly. Sex can also kill if one contracts various STD's.

Cell phones and the Internet are powerful vehicles. Yet parents give kids cell phones like they are the latest gadget, ignoring what can happen if a child makes a childish mistake. They can be scarred for life.

Driver's education cannot stop accidents among teenagers – but well done – it can reduce them.

Sex education cannot stop sex among teenagers but it can prevent STD's and have students take it more seriously.

Digital citizenship education cannot STOP the headlines of people who do scarring things through improper use of their technology but I believe it can reduce them.

Margarite's Mistake
In the Saturday New York Times Article “A Girl's Nude Photo, and Altered Lives” ( a story we'll be talking about in Digiteen this week), Margarite is an eighth grader who posed nude in her mirror and sent the picture of herself to a popular athlete, Isaiah.

Isaiah forwarded this to a former friend of Margarite's who then forwarded it to every contact in her cell phone with the message:

“Ho Alert! If you think this girl is a whore, then text this to all your friends.”

The video went viral and through four middle schools. When parents started calling in to complain, the Middle school principal at one school launched the investigation that led to the confiscation of student cell phones and three students being charged with dissemination of child pornography (a class C felony.)

The county prosecutor, Mr. Peters said, “The idea of forwarding that picture was bad enough,” he said, “But the text elevated it to something far more serious. It was mean-girl drama, an all-out attempt to destroy someone without thinking about the implications.”

As other kids left school to go home at the end fo the day, Isiah and Margarite's former friend were led off in handcuffs.

The article goes on to say that sexting (between adults) is protected first amendment speech and that many magazines are giving tips on “how to look good” in sexting photos. However, as many as 24 % of 14-17 year olders have been involved in “some type of naked sexting.” (AP & MTV Poll – PDF)

Forwarding such photos can land you in jail.

Don't Freak Out, Fan Out
I think that banning cell phones and removing them from schools is NOT the right answer. You might as well dam the Mississippi in a few weeks during flood season. See if that will hold!

It would be like banning cars because too many kids die in traffic accidents. Not realistic. We have to co-exist with cars because they are part of our society and the way we get around.

Banning cell phones is not realistic. We must co-exist with cell phones because they are part of our society and the way we communicate.

When someone lost an earring in the grass the other day – we all took a small space and fanned out to find the earring and eventually did.

Likewise, we should all take the “plot of ground” assigned to us. Our classroom. Our Home. Our school. Our community.

We can't do it all but we can do something.

This should be treated a lot like driver's education which does have a bit of classroom work but a lot of time IN a car navigating the spaces. If a kid is going to have a problem with a left turn or parallel parking you want them to have it under supervision so it is not scarring for life.

The final example from Facebook Friending 101 for Schools (about the student I named “Zipper) that I posted on Friday is from one of our Flat Classroom projects. (I did change the names.) The teachable moment that I discussed in that case study transformed our our kids and they all went in and changed their privacy settings.

Digital Citizenship in Situ
That is why I think effective digital citizenship education is done WHILE students are using educational networks (social networks for education) and cell phones. In fact, that is why we founded Digiteen and spun it off as a nonprofit – because we felt like the kids who came in to Flat Classroom weren't ready because they were clueless about managing their personal identity in safe, wise ways!

Kids DON'T get it, but neither do adults. We are learning as we go.

In fact, I received a SCATHING commenter accusing me of not knowing Facebook privacy settings because she says she has set lists to:

“I friend students. I also have a specific list just for them. This list is restricted so that they can't see:
– any of my default wall posts (unless I specifically select my “students” list, but even then when I post to that one, I ONLY post to students, so that my other friends can't see it)
– anything anyone posts on my wall
– any of my photo albums except for the one of my profile pics
– anyone on my friends list (you can even restrict that, it's just on the privacy screen under “Connecting on Facebook” rather than “Sharing on Facebook”)
– any pages or anything else that I “like””

Now, I've got it on my personal PD list this week to check this out and learn if this is indeed the case. Furthermore, I want to test it and see if it actually works that way. I value commenters that let me know that there is more to be told.

(Of course this commenter didn't do it in a very nice way and that, I feel was poor citizenship, but onwards and upwards – if we cannot learn from those who are unkind to us, then we are letting our emotions restrict our learning potential – aren't we? So, my friends, don't let your emotions on this topic cause you to make a decision not to learn either.)

If I wasn't on Facebook and wasn't blogging – how would I know? It is a MISTAKE to ignore Facebook. You should all also know how to send and receive text messages.

Case Study: Who is Mij Cosby?
I've changed this name because we don't really know if this is a real person or not. However, last week as my class and I were brainstorming our action project for Digiteen, a student said – we need to talk about friending because “WHO IS MIJ COSBY?”

“There is this girl over in an adjacent county who has no friends at her own school but who has asked to FRIEND every student at Westwood. I won't friend Mij because I don't know who it is.”

We talked for some time and everyone in the class but one person (who said he needed a lot of friends) unfriended Mij because they realized that NO ONE knew who it was.

But I left the question on the board and didn't think another thing about it. My tenth graders came in and saw the board and several shouted out

They too had been friended – such was the whole day!! We don't know who this is, but what we found out happened is that this person was able to get about 5 kids to friend at our school and then everyone started friending Mij. In 2-3 days at least 50+ kids (that I counted) had friended Mij and NO ONE knew the person!

They admitted that they look to see how many mutual friends they have and then decide if they should friend or not.

Almost all of the students unfriended Mij because we cannot find ONE student in the whole school who knows her. NOT ONE. We don't even know if there is a family in that county of 2800 people with that last name! We think Mij is a fake.

And yet, several kids didn't want to unfriend. (“But I want to have a lot of friends, Mrs. Vicki.”) And many didn't want to make their pages Friends only — some have it set to public. (“I want people to know who I am.”)

This live in-situ case study that happened because we were talking about what to DO about digital citizenship caused around 90+% of my students to change their behavior – at least for now. That did more to help them understand friending than anything else. Facebook is unblocked at school (at least for now) so they took action RIGHT THEN.

Get them talking and acting and learning and doing!

Remember your noble calling. Handle this situation with nobility and wisdom and resist the desire to freak out and create fear.

And also remember this, I'm bringing attention to social media in schools because it is IMPORTANT. I will continue to talk about this and share what I know – but if I don't know something (and there is tons I don't know) please feel free to shoot me an email at vicki at coolcatteacher dot com and teach me something. 😉

You are great readers and sharers. Thank you.

Share | Tweet | Share | Pin It | email
Category: Digital Citizenship
Disclosure of Material Connection: Some of the links in the post above are “affiliate links.” This means if you click on the link and purchase the item, I will receive an affiliate commission. Regardless, I only recommend products or services I use personally and believe will add value to my readers. I am disclosing this in accordance with the Federal Trade Commission’s 16 CFR, Part 255: “Guides Concerning the Use of Endorsements and Testimonials in Advertising.”

26 thoughts on “The Case for Digital Citizenship in Schools”