Thaw the chicken: When do best practices become the worst?

Home » Uncategorized » Thaw the chicken: When do best practices become the worst?

Where are the failures of Web 2.0?

There are people on the Internet wondering where the failures of Web 2.0 are including Bud the Teacher when he ponders:

The only problem with best practice texts, too often at least, is that they turn classrooms into Mickey Mouse spaces where all goes well and there's never any trouble. Every student in these books finds success in the classroom. At least, that's how the texts present classrooms.

Again, this is not universal; many good texts share failures as well as successes, but not nearly enough.

I do not want this blog to become a text that misinforms as it informs. Nor do I want to read blogs that paint stories of success while ignoring the stories of students lost or unsuccessful along the way.

We aren’t going to learn anything by merely telling half of the story. And omission, intentional or otherwise, may blur the narrative.

Will Richardson sort of started the discussion in To Blog or Not to Blog? and his follow up post It's all about engagement.

So where is the downside of Web 2.0 in my classroom?

But passion is about belief! Every student in my class doesn't “get” Web 2.0 in fact a few (not a lot) think “Why on earth doesn't everything just stay the same?” and they tell me so. Their views are valid and they have a right to those views but they will make them out of knowledge not ignorance! 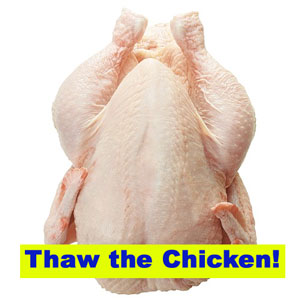 Thaw the Chicken!
Best practices are great, but it doesn't take much to missapply them. Perhaps that is what Bud is discussing. Where are the missteps?

Being a metaphorical type person, I think of the “Thaw the Chicken” story I like to tell my kids.

Urban legend or myth. The NASA chicken story is in thousands of places on the Internet. (603 on the last Google) and originated in the late 1990's.

The Story
Here is how it is recounted in most every place:

Scientists at NASA have developed a gun for the purpose of launching dead chickens. It is used to shoot a dead chicken at the windshield of airline jet, military jet, or the space shuttle, at that vehicle's maximum traveling velocity. The idea being, that it would simulate the frequent incidents of collisions with airborne fowl, and therefore determine if the windshields are strong enough to endure high-speed bird strikes.

British engineers, upon hearing of the gun, were eager to test it on the windshields of their new high-speed trains. However, upon firing the gun, the engineers watched in shock as the chicken shattered the windshield, smashed through the control console, snapped the engineer's backrest in two, and embedded itself into the back wall of the cabin.

Horrified and puzzled, the engineers sent NASA the results of the experiment, along with the designs of the windshield, and asked the NASA scientists for any suggestions.

The NASA scientists sent back a brief response: “Thaw the chicken.”

There is a small step from a best practice to a worst practice.

So, feasibly you could take something I've blogged that was incredible in my classroom and put it in yours and it could fail?

If you are trying a lesson in your classroom that I or anyone else has used, follow your gut instinct. You are the one in the classroom!

Just Don't Lose the Lesson
George Lucas is quoted as saying in this month's Guideposts,

“You can fail, just don't lose the lesson.”

Sometimes failures are as important as successes. We know what does not work when we fail.

That too is a valuable lesson.

In Conclusion: The Balancing!

Last night, the GRANDMOTHER of two of my students came to me and thanked me for the technology I've taught her grandchildren. She said, “I don't really understand what they are doing but I know they are excited and motivated about learning and school.”

Her grandaughter, a student of mine, posted my sentiments on this on her personal blog yesterday:

Just because you’re talented or work hard at one thing or race doesn’t mean you can win them all. I really wish I could have explained that to that younger girl, because I believe it could save her much grief in the future. But for now all I can do is work hard and hope it pays off.

Well said, Kyli. Without blogging, it would have been a saying left in your private journal and never touched my life. Point made.

To Bud
Bud, I will do my best to present both sides. As an optimist, I am excited when I learn even if it is from a “failure.”

One of the greatest challenges of my life is helping my child who is gifted but has a learning disability. I have been frustrated, in tears, and elated as we make progress.

To say that dealing with kids is always roses is a lie. But the progress I've seen with my own son and his laptop and other kids gets me excited! True elation is hard earned and hard fought!

To me, the greatest failure is to give up not to mess up so perhaps I will always have a positive spin in my blog. I mess up, learn something that I'm excited about and move on. That's just me.

Thank you for making me think, Bud.