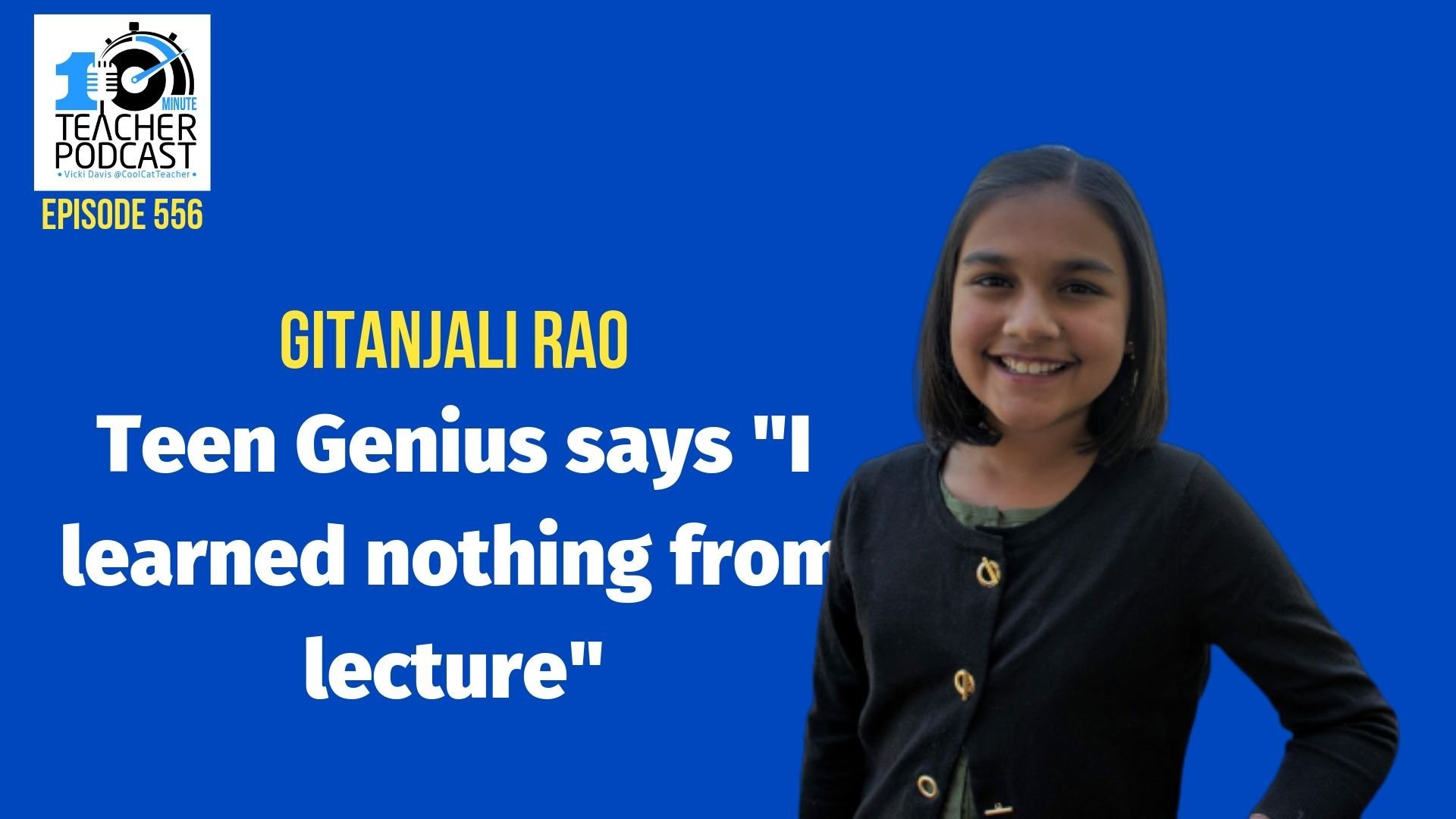 Teen Genius Says “I Learned Nothing from Lecture”

She was named America’s Top Young Scientist of 2017 by the Discovery Education 3M Young Scientist Challenge, with a patent-pending device to detect lead in water faster than any other current techniques. She then open-sourced this device so people can use the technology across the world. In today's show, Gitanjali talks about her learning journey and the teachers who reached her (and the pedagogies that didn't.) This show is a must-listen for science teachers and teachers everywhere. 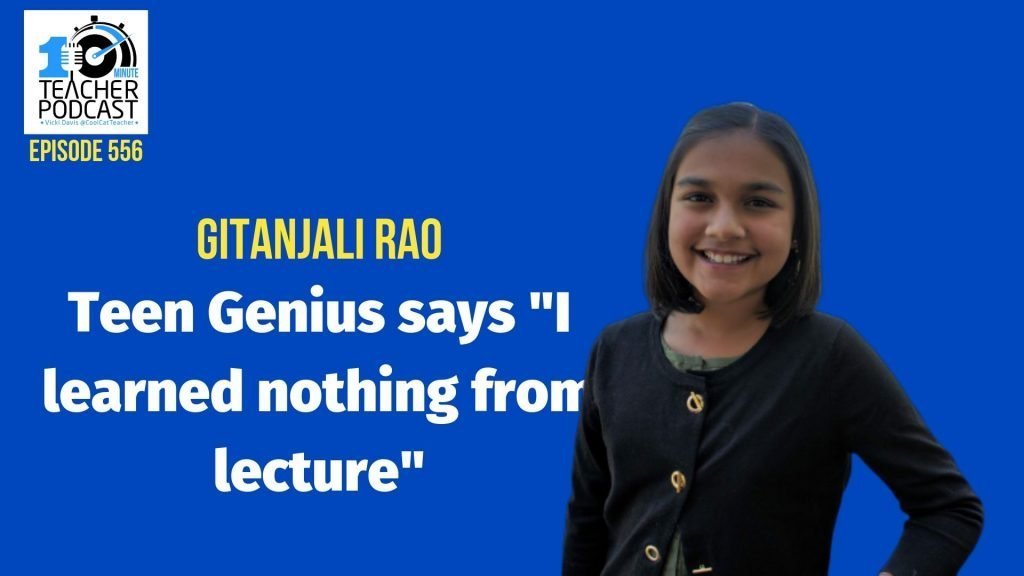 Listen to Gitanjali Rao talk about her learning journey

Get Credit! Some schools, districts, and organizations allow credit for listening to podcasts. Whether they do or don't, to get the most out of listening you can use this Podcast PD Template Hyperdoc. Just make a copy and adapt it for your use or print it. If you don't have Google Docs, just use this PDF.

Challenge in this Show

Today Gitangili challenged is in 4 ways:

I also want to give a shout out to some educators who shared – Rawn Bolden and Laura Synder each played “bear salmon mosquito” in their classrooms from our 5 More Easy Brain Breaks Episode with Rob Donatelli – educators who care share, and as they shared others starting joining in the conversation. So, if you take the challenge from this episode, share what you do and tag me – @coolcatteacher on the social media of your choice and lets level up together. 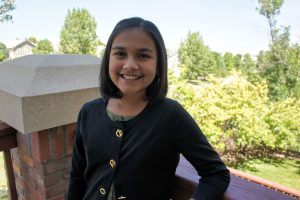 Gitanjali Rao is 13 years old and is an 8th grader at STEM School Highlands Ranch in Highlands Ranch, CO. She was named America’s Top Young Scientist of 2017 by the Discovery Education 3M Young Scientist Challenge, with a patent-pending device to detect lead in water faster than any other current techniques. She is a Davidson Young Scholar since 2012 and has received several scholarships and awards for achievements in science, arts and community service. She is an active STEM promoter and is involved in promoting STEM-based activities in schools, clubs and the community. She was selected as the STEM Scout of the Year in 2016-2017 and was selected as one of the 12 delegates to Report to the Nation in the year 2017-2018.

She was recognized as a Forbes 30 under 30, for science and invention. She is also an EPA Presidential award winner and is recognized as a Gloria Barron ‘Young Hero' Honoree for community impact.

Gitanjali has open-sourced her lead detector invention processor and app code for the community and it has been used for other applications. She is continuing to perform accuracy testing in Denver Water for the lead sensor and has partnered with an incubator to create reproducible devices.

Gitanjali has won awards for her writing in national and international contests. She published her first book at the age of 9, called, “­Baby Brother Wonders.” The self-illustrated book, based on the story that won 2nd prize in the PBS national writing contest, described the world through her younger brother’s point of view. Gitanjali has also won first place in the International Aviation Art Contest for last four years at the state level. She was a “TIME for Kids” Kid reporter for the 2017-2018 school year and wrote articles bringing awareness to Flint crisis. Apart from writing and art, Gitanjali is part of STEM Scouts and 4-H club.

Some of Gitanjali’s hobbies include playing the piano, Indian classical dancing and singing, swimming, fencing, and baking. She has been playing classical music for almost 8 years. She shares her talent of playing piano in local assisted living centers.

Gitanjali is on the board of Directors for an organization called Children’s Kindness Network that spreads an anti-bullying message and promotes the importance of kindness in all of us. She conducts workshops in elementary schools and hopes to educate children about kindness when they are still young.

Gitanjali interns in summer at the “The 3D printing store” to shadow designers. She is conducting research in the University of Colorado, Denver in the Department of Cell Biology to find a solution for prescription opioid addiction using the latest in genetic engineering. Gitanjali is also working on implementing a Cyberbullying app based on AI/Machine Learning in the community along with a team and they were awarded a grant of $5K from eCybermission (Army Educational Program).

She recently gave four TEDx talks three in India and another in Nashville apart from speaking in several girls' and global conference and being a UNICEF panelist about the role of Youth to power the planet.

Gitanjali aspires to study genetics and epidemiology. She hopes to keep writing, discovering, and sharing her knowledge in the future.