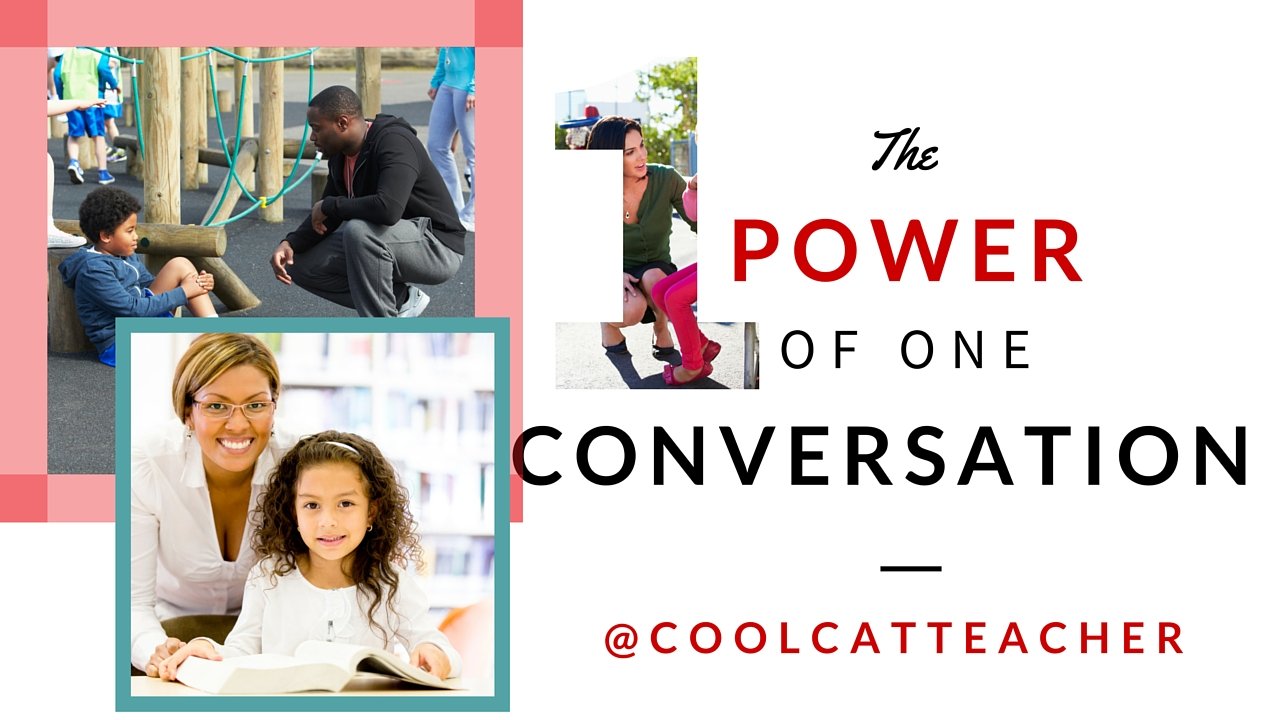 The Power of One Conversation

Home » Education » Teachers » The Power of One Conversation

Sue’s lunch pail slung back and forth as she waited for the bus. She fingered a rip in her homemade skirt and thought it was time for another patch. Another patch?

Sue looked longingly over at two of the most popular girls in her class. They were dressed stylishly as they threw their bags in the convertible and jumped in for a ride home with their boyfriends. She didn't waste her time wishing to be popular anymore. Sue turned her attention back to waiting for the bus so she could go home, change clothes, and feed the cows. If she was lucky, she might get to read before the sundown.

Sue heard the clicking of heels behind her. Turning around, she looked into the eyes of Mrs. Velma Scruggs, her literature teacher.

Sue looked towards the empty bus line wondering what would happen if she missed her bus. It was a long walk home.

Mrs. Scruggs said. She took Sue’s arm and they went into the classroom just down the hall.

As they eyed each other across Mrs. Scruggs’ wooden desk, Sue thought she was in trouble.

“Sue, I’ve been thinking about you. I think you are a leader. You should run for student government,” said Mrs. Scruggs. “I think you can win.”

Sue was taken aback. When they announced the elections over the intercom, Sue didn’t dream that she could even run. You only followed people you admired. No one wanted to be poor. Sue fingered the hole in her skirt again. Poor kids didn't lead this school. It wasn't done.

As she lay awake in bed that night after her prayers, Sue wondered if she should even try. She thought about the girl who was running for that spot – beautiful, wealthy, and always wearing the latest fashions. (Not to mention the convertible-driving boyfriend who was to die for.) The popular kids would never vote for Sue. Wasn’t this what an election was, a popularity contest? But Mrs. Scruggs thought she could win. And Sue thought Mrs. Scruggs was very smart.

So then, instead of counting sheep, Sue started counting friends. She knew the six kids who lived under an overturned bus out of town. Their dirt floor was swept clean by their Mom every night. She knew kids who had fleas but couldn’t help it. She knew lots of country boys who would miss school to hunt rabbits or raccoons if their families didn’t have enough to eat. More than knowing them, these kids were her friends, and she respected them – every single one of them.

Sue’s friends might not have money, but they each had a vote.

So, the next morning as soon as the bus dropped her off, with lunch pail in hand, Sue stood in front of Mrs. Scrugg’s desk.

said Sue breathlessly. Then, with more confidence and a strength she didn’t know she had, she met Mrs. Scrugg’s eyes (something she couldn’t do the day before) and said loudly,

The day was full of whispers, sideways glances, and giggles from the well-dressed crowd in Sue’s direction. But Sue’s friends supported her. They campaigned for her.  And all of them came to school the day of the election even if their cupboards were bare and their cows needed tending. They wanted her to win.

And Sue won. She not only won the election, but she also won in her own mind. She now saw that she could set goals and achieve them. Shewas no longer limited by poverty. The voice of a society that had told her that her worth was determined by the balance (or lack thereof) in her parent’s bank account was silenced.

Sue began listening to the voice of her dreams.

That one conversation with Mrs. Scruggs changed everything. After saving every dime, Sue went on to Auburn University and became a teacher.

In her own classroom, Sue continued to have across the desk conversations with her own students, helping them see their hidden strengths and talents.

During those years of teaching, Sue had three girls.

Sue’s oldest daughter is me. Sue is my Mom.

[callout]We could reach deep and say that my very existence is due to Mrs. Velma Scruggs tapping that teenage girl on the shoulder in the bus line all those years ago.

Mom met my Dad through friends at Auburn. I am here writing these words because Mrs. Scruggs talked to Mom about running for student government.[/callout]

How many times does one conversation between a student and teacher change everything?

As many senses as we have, we often don’t sense our own strengths – particularly when we are teenagers. We often only see that nasty pimple or the clothes we don’t have in our closet. We stack all of our have nots up against the haves of everyone else and think we’re nothing.

A child who thinks he or she is nothing has missed everything beautiful and valuable about life. And that is who we are.

We are teachers, and we can give children a great gift if we help them find themselves.

Few things are more important than having important conversations with kids. Do it every day and you’ll inherit a wealth of significance. Notice things. Put yourselves into the lives of students.

Take the time to have an across the desk conversation. Introduce a student to himself or herself and let them meet their future. You can do this. I'm living proof that these conversations are important.

This is probably the best post I have read all year and should give great encouragement to all students from poor families all over the world. Charles @classcharts