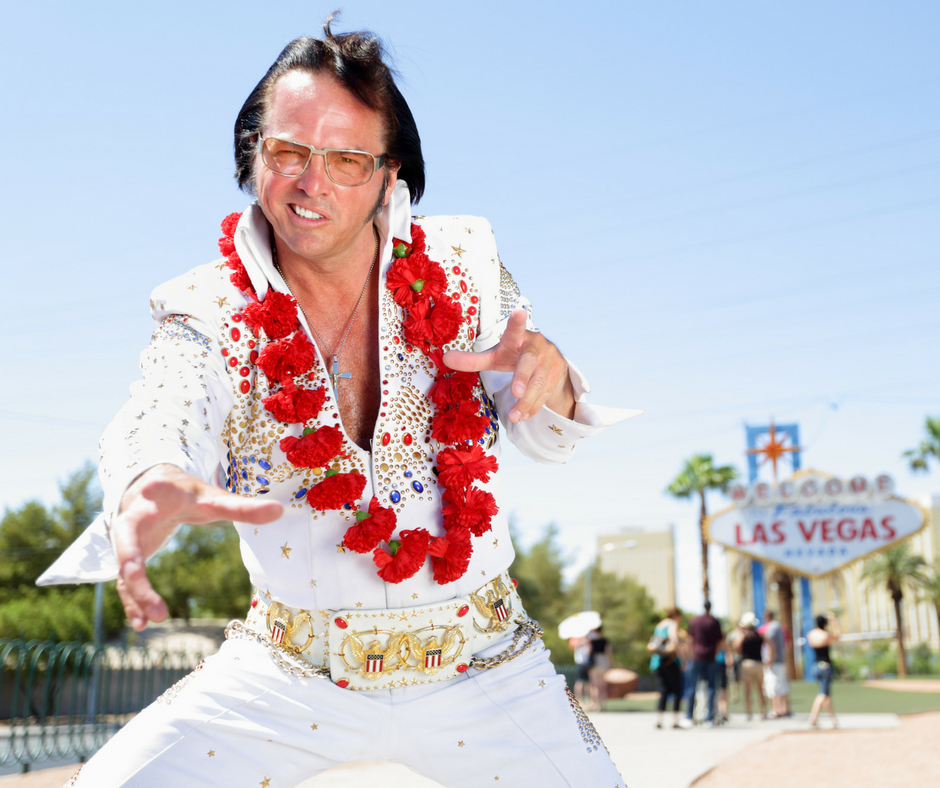 I was in the Memphis airport rushing to get to the plane. As I went through the security screening area, I saw a jeweled hand reach to help me with my bag and hear – no kidding – Elvis Presley say,

“Thank you. Thank you very much.”

Except it wasn’t Elvis. It was a TSA guard with an Elvis pompadour and Elvis glasses! No kidding!

I grabbed my stuff and incredulously hustled to my gate. As I sat down, I began asking myself a few rhetorical questions:

There is a big difference between emulation and interpretation. For example, I examine what Michael Hyatt does with his blog and podcast. I look at the code on the page to see what apps he’s using. I read his books. I listen to his podcast. I don’t imitate him, I emulate him. I take things that will work for me and try them out.

There’s a fantastic book called Blue Ocean Strategy: How to Make Uncontested Market Space and Make Competition Irrelevant that talks about defining your own market. I live and follow that. I’m going to be uniquely what I can be that no one else can copy.

Here’s something to remember: Excellent individuals find people to emulate but are careful to be original. You can emulate without becoming a silly imitation. Be a unique you.

“Wanting to be someone else is a waste of who you are.”

“where’s your will to be weird?”

Ok, both of these men were strange to many but certainly they were authentic.

The world is full of anonymous people not brave enough to be who they are. Being boldly you takes courage.

For example, it takes courage to write anything about the Christian side of my life. But it is who I am. I can’t lie and be a fake. You’ll know it.

If I said, “I go home and meditate and do yoga when I’m stressed,” I might be saying something less offensive but it would be a lie. And honestly, I’d rather have an offensive truth-teller than a lying fit-inner any time.

At least you know where you stand with someone who tells the truth! Truth and trust go hand in hand. If someone always agrees with you, one of you is lying.

I went through a stage where I felt like that my middle-aged body and un-cool clothes were going to hurt me with kids. But even as a high schooler, I wore skirts and dressed up. I didn’t fit in then, so why do I care now?

So, I wear scarves. Almost every day. Last week a teacher said, “Scarves are your signature” and I said – well, I guess they kinda are. I wear them because I like them whether the fashion runway tells me to or not. I’m the kind of person who dresses up to teach school. That is who I am.

You don’t have to be somebody you’re not.

said the coach about Secretariat, the greatest racehorse of all time.

Secretariat liked to start at the back of the pack and then gain speed, usually surpassing all rivals by a lap or more.

This is my big issue with the “on the same page” movement that has every single teacher in a department doing the same thing every day. As long as the content is covered, does it matter if they are on the same page?

Some teachers are thoroughbreds, others are Secretariat and others (like me, I think ;-) are mules who plod ahead every day.

As long as their classes get to the finish line, I don’t know why they should be forced to run neck and neck.

Unique interests and passion make us uniquely suited to be exciting to those around us.

You can start today.

“If I could start again a million miles away, I would keep myself, I would find a way.”

So, today, excellent friend -have you kept yourself?

The world has already seen Elvis – anyone else who tries to be just like him is just a cheap wannabe.

Are you an imitation or an original? Being original doesn't necessarily mean you'll be famous, but I can promise you that if you're not an original, you have no hope of being memorable. There's no such thing as a famous Elvis impersonator.

Be an original you or be a forgettable imitation of someone who was original.

This post is day 49 of 80 days of excellence. I've created an email list below for those of you want to be emailed the full posts written as part of this series.