In the 1970’s the parking lot would be full of parents ready to see the school play. Or Christmas pageant. Or spelling bee. Students performed, and parents came. The school auditorium was the place where students showed off their work. The halls showed artwork that parents came by to see as they attended events. The school building was the hub of the community. Everyone came. Everyone roamed freely.

A child’s bookbag went home, and Mom checked it every day. The notes were read. The artwork went on the refrigerator. Papers were signed and returned. Simple.

Today many families have someone working 24/7. Some parents are out of town. Another does shift work starting at 4 pm.

Families are changing too. Notes don’t get home. Sometimes notes get to one home, but some kids have two. Some book bags don’t even go home. Communication can be a challenge.

A new stage emerges. So does a new note home to parents.

There are those who turn up their nose at such newfangled approaches. They long for the old wooden stage with the squelchy mike and wooden seats. “Things were simpler then,” they mumble. And they were.

There were fewer stages. There were less parking lots. And the largest ballroom was the American Legion.

Now, (if I want to) I can pop my cell phone out of my pocket and bring up Periscope and stream a school play to my one hundred and ten thousand Twitter followers. I can take pics of my students and share them with Kid President and everyone following #kpawesomegirls.

When my school had Homecoming last week, thousands of people took to our Facebook page to see the pictures and videos. Everything from the announcement of the Homecoming Queen to the mini-parade was uploaded soon after it happened.

The research shows that parent involvement can make as much of a difference as 3/4 to a full grade point of a child’s GPA. That’s a letter grade.

We need to involve parents. We need a new stage.

But the world’s not just a stage. It is also a grand meeting place. Social media gives us largest ballroom ever assembled where people from around the world can mix, mingle, and find their clique.

Jacques du Toit and his students can be Tweeting Aztecs and Karen Lineman’s first graders can tweet what they learned today. Kathy Cassidy’s six-year-olds blog for the world. My students can write a blog about their offense at human trafficking and create apps and websites encouraging people to be kind.

“When student work culminates in a genuine product for an authentic audience, it makes a world of difference.”

We know that audience improves student work. Whether kids write tweets that they audition on a classroom “Tweet Board” and the teacher picks the best, or they connect in a massive Twitter chat about improving education (#stuvoice), students are eager to share. They want an audience.

Staging a Comeback in Education

Students are standing on the stage already in their private lives. So are parents.

Let me tell you who’s not on the stage. Schools. Too many schools fold down the wooden seats, turn on the squelchy mikes, plan events, and wonder why no one comes. Too many schools whine because parents don’t show up. Too many teachers complain that kids don’t want to write, or that parents won’t read to their kids anymore.

But complaints are just words. Let’s put our words out where they really matter.

Because we want to “protect kids”. We want to keep them safe. From what? Their parents actually knowing what is happening in the classroom for a change?

In reality, kids are in more danger from the person they jump into the car with after school than some invisible bogeyman who lurks on the Internet. (We teach kids how to cross the street, but how any schools talk about the risks of geotagging pics on social media? But I digress.)

Using social media in schools isn’t about trite “make progress” sayings. It isn’t even about accepting what is new or leaving behind what is old. Using social media is actually about three good old traditional values that can make a country great:

What We Do Because We Love Children

When you love kids, you change even when it makes you uncomfortable. 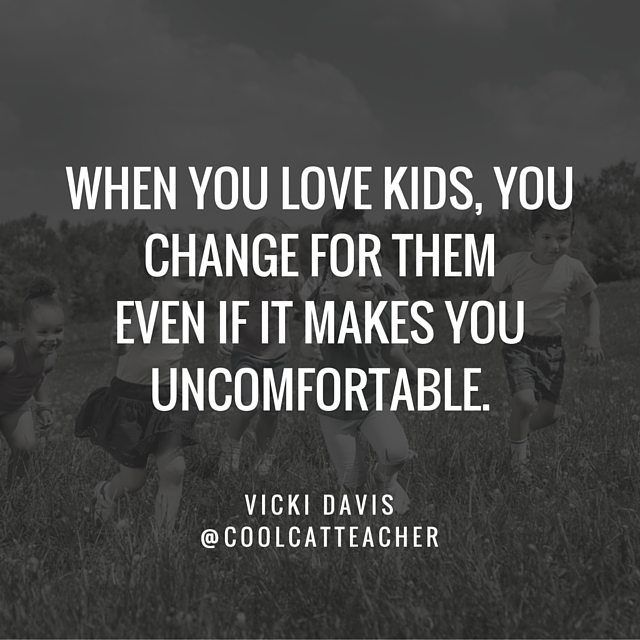 We must be a generation of educators who builds a new stage. We must welcome a new way to communicate with parents, show student work, and educate for student success.

If a school building constructed 50 years ago had never been maintained or improved, we would complain. It is time to update our communications methods too.

For, we cannot let generations future look back upon the watchers on the wall and see a band of educators and parents who saw only a frozen north. Social media and schools need not wed in a blood-red wedding.

Categories: Education, Education Trends and Topics, Get Connected (PLN Building), Social Media, Students
Disclosure of Material Connection: Some of the links in the post above are “affiliate links.” This means if you click on the link and purchase the item, I will receive an affiliate commission. Regardless, I only recommend products or services I use personally and believe will add value to my readers. I am disclosing this in accordance with the Federal Trade Commission’s 16 CFR, Part 255: “Guides Concerning the Use of Endorsements and Testimonials in Advertising.”

7 thoughts on “Social Media in Schools”