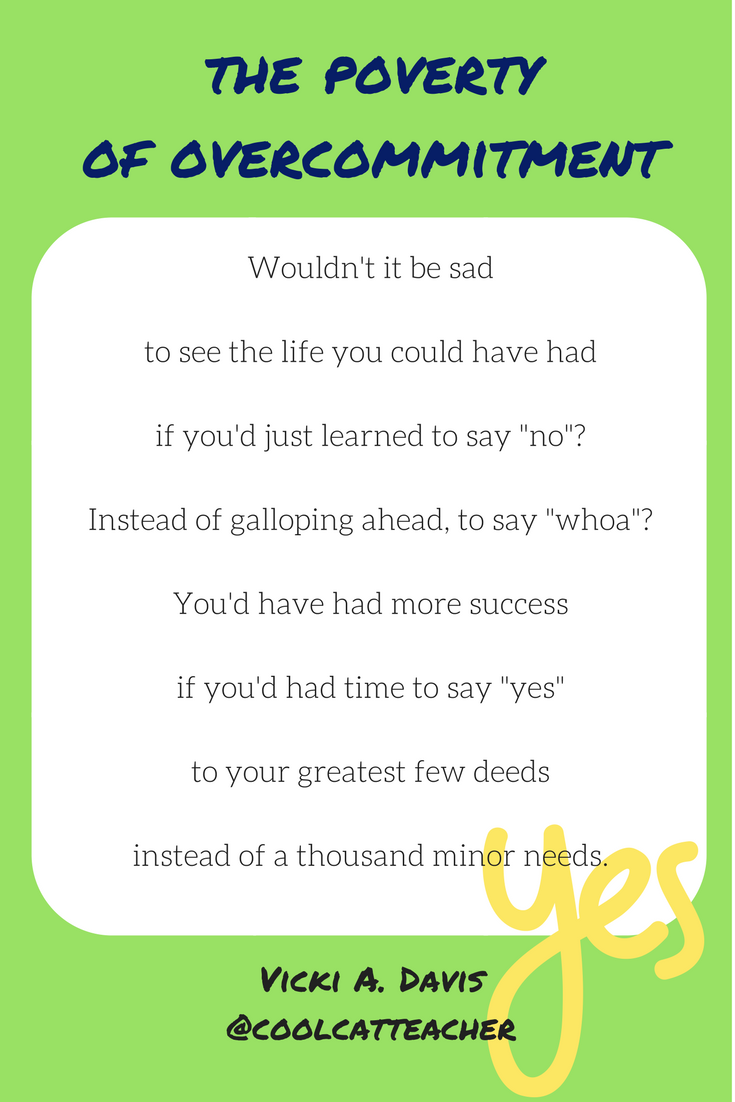 The Poverty of Overcommitment: You Have to Say No So You Can Say Yes Sometimes

Home » Productivity » The Poverty of Overcommitment: You Have to Say No So You Can Say Yes Sometimes

This past Monday, Kip and I sat down with my calendar. After we added up the time for commitments, we had a heart to heart about what I could do and was called to do versus what I wanted to do. As a result, I had to say “no” to three very important things to me. I had to disappoint some people who I care about. It was hard. But one thing those who seek excellence forget — saying yes to everything will impoverish you of your time. You'll have no more time to give to important things because you never said “no.”

You have to say no a lot if you want to be able to say yes sometimes. Life is full of choices. We have to make hard choices in order to focus on what is best.

Learning to Say No Can Be Hard for Some People

Many years ago, when Kip and I were first married, Kip realized that I had a huge problem. I like to please people. Too much sometimes, in fact. So, after I was overcommitted for one weekend yet again, we were on the couch talking and Kip said,

“Vicki, I want you to practice something.”

And I looked at him and said “what?”

Well, at first, I admit, that it was hard. Of course, we were married because I'd said yes to him in the first place, so saying no to him was hard.

After I was done, he said,

I admitted it was kind of hard. So, then, he said,

“Now, go and start saying no sometimes or we'll never see each other ever and that will be very bad. You have to remember that when you say yes all weekend to everyone else, that you will be saying no to me — and we're married! So say yes to me on Saturdays and no to everyone else.”

Since then, I've had to learn to say no to several things and people I cared about deeply. However, many times it was necessary so I could say yes to my family.

Yes to my church.

Yes to the deepest callings of my life and yearnings of my soul.

Yes to the greatest accomplishments of my life so far.

To be excellent you have to say no many times if you'll have the time to say yes.

How Do We Decide?

Admittedly, there are those selfish souls who never say yes to anyone for anything. However, I've found that the most successful among us aren't stingy with their time. In fact, they're in huge demand because they are so excellent. So, they have to learn to be stingy with their yeses to the important things and generous with their no's to non-priorities.

Notice, I didn't say “important people” or “big jobs.” Don't mistakenly think that someone has to have a title or power to be worthy of your time.

My assistant, Dr. Lisa Durff, knows that I want to read every single classroom teacher's email that is sent to me. That is who I serve.

At church and at school, I want to spend time with the children. I always have time for hugs from little kids and conversations with older ones. These are the gems that make life glisten that are often overlooked when my calendar is too full and the list is too long with things that really don't need to be there.

We can't make more time. We can't manage it. We can only use the scarce time we have in the best way possible.

For today's challenge. Ask yourself if you're overcommitted. Is there anything you know you need to go say no to right now before you get into it too far?

And if you're a Christian, remember John 15:5  and make sure you're called to something.

The Poverty of Overcommitment

by Vicki A. Davis

Wouldn't it be sad

to see the life you could have had

if you'd just learned to say “no”?

Instead of galloping ahead, to say “whoa”?

You'd have had more success

if you'd had time to say “yes”

to your greatest few deeds

instead of a thousand minor needs.

This post is day 18 of 80 days of excellence. I've created an email list below for those of you want to be emailed the full posts written as part of this series.

Sometimes (more often than I like), I have to say “later” to requests for tech support because there’s ONLY ONE OF ME!