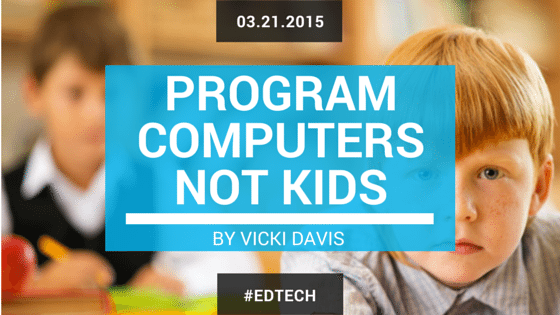 [callout]As part of Cathy Rubin's series on the Global Search for Education, this month's question is “What is the biggest mistake classroom teachers make when integrating technology into the classroom?” [/callout]

Too many classrooms cover Lesson 52 today and Lesson 53 tomorrow and the next day, guess what they’ll do…. 54. These same classrooms will make a fatal mistake when using technology. Falling short of the potential of technology, they’ll program our children to just learn multiplication facts or grammar—not that technology doesn’t teach these things more rapidly… it will.

But we need to unleash creativity, not just find a faster way to learn facts. Seymour Papert and Cynthia Solomon talked about the tendency for “dumb technology” uses more than 40 years ago,

“The phrase ‘technology and education’ usually means inventing new gadgets to teach the same old stuff in a thinly disguised version of the same old way. Moreover, if the gadgets are computers, the same old teaching becomes incredibly more expensive and biased towards its dumbest parts, namely the kind of rote learning in which measurable results can be obtained by treating the children like pigeons in a Skinner box.”

There is a model for technology integration called SAMR. The first stage of implementing technology in the classroom is “substitution” where you just substitute technology for what you can do already. Teachers who just use technology to teach facts and routine items are stuck in substitution. To successfully implement new technology, we must get to the R stage of “redefinition.”

Redefining the classroom with technology can be seen in the Maker Movement, app smashing, and genius hour. All of these unleash student creativity. Teachers become coaches.

In my classroom, I teach the principle of convergence. For example, when your GPS and smartphone merged, that is called convergence. I used to have students just learn what had converged in the past. But now, I have students invent how they think technology will converge in the future.

This year, when I taught this lesson, Rebekah, a tenth grader envisions smartphones converging with contacts. She made the following video.

We learned about the term convergence but instead of memorizing examples, students created something new. John Seely Brown says

When journalist David Carr was asked to give advice to students, he said,

“You have to make stuff. No one is going to give a damn about your resume, they want to see what you have made with your own little fingers.”

But to create, we must give students permission. We must make classrooms places where they can experiment and fail. For without failure, there is no success. Without permission, there is no creativity.

“Studies of creativity suggest that the biggest single variable of whether or not employees will be creative is whether they perceive they have permission.” says management expert, David Hills.

We need to give students permission to create and innovate. Our classrooms are not prisons of the mind. We should not stifle students in rows and chairs, rotely entering numbers into an iPad, when their fingers long to create a movie.

Math facts may be significant, but the simple fact is that timidly using technology to program students is a waste of technology, a waste of time, and more importantly, a waste of mind. It is time to bravely redefine what a classroom can be.

I completely agree with the fact that students need to create and innovate when it comes to technology. Experimentation and failure is key to students showing growth. Classrooms need to be active, and students need to not be afraid of diving in to something and exploring something for all its possibilities. The model SAMR for technology integration sounds quite interesting. I would like to do some more reach on Substitution, Augmentation, Modification, and Redefinition, which is the SAMR model. If anyone has more links on this model I would appreciate getting some new knowledge or if you have some advice I would love to hear it.

I want to start off by saying how interesting your blog is to read. I strongly agree with the point raised in this specific post about how there are better, more effective ways to incorporate technology in the classroom. Students should be challenged with the technology in ways that allow them to be creative and innovative rather than just using technology to practice basic facts or learn concepts. Hands on learning, along with the use of technology has shown to be very effective. I think that it is important to use technology, but at the same time incorporating it appropriately. Not simply using games or other software to perform what the educator should be doing. That is why I found the SAMR model to be important.

Thanks for sharing your thoughts.

Ah yes, Amanda, SAMR is a very important model that challenges us all to REDEFINE the classroom and not just substitute what we’re already doing with an electronic version! I echo your comments and appreciate your making them.