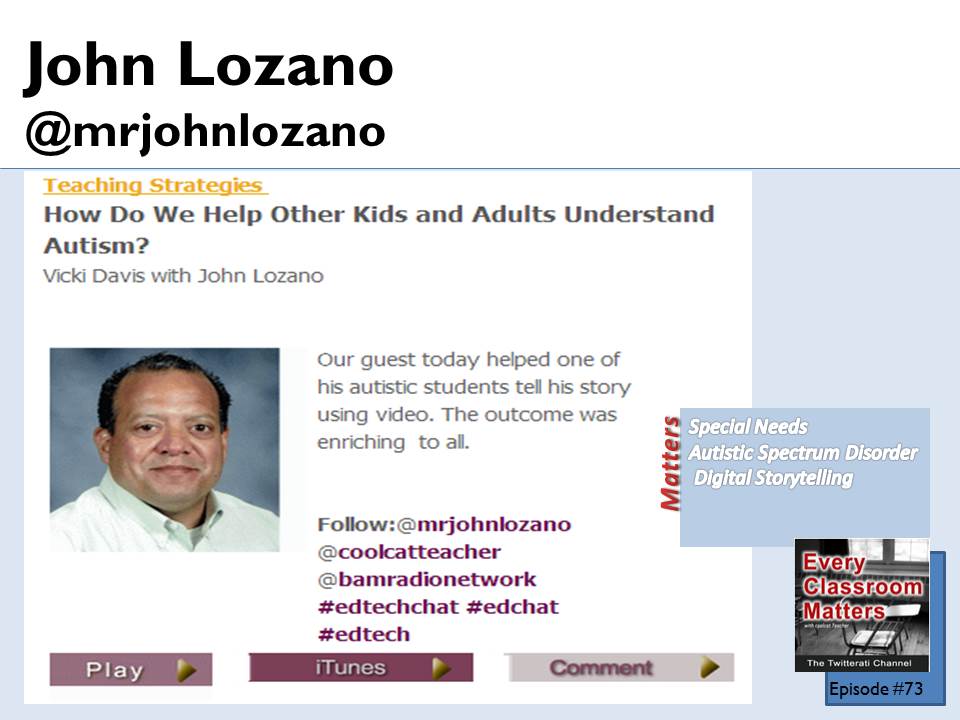 Michael wanted to tell his story but he needed help. So, teacher John Lozano helped Michael find his voice through video. Although it took seven months to craft and edit, Michael's video is released first on YouTube (then removed  for reasons John shares on the show). After editing, it is rereleased on NextVista.org. This touching story points to something many of us are finding out: video gives us a powerful way to help kids with special needs share their story.

I love John's authenticity for the struggle but his passion for helping Michael share his story. As soon as the other children see the video, John says they start to understand Michael better. As can be seen from this story, every student needs a voice, whether via blog, audio, or video. Let's help them develop that voice.

Of course, we must add our voices too. In this story, my friend Rushton Hurley told me about Michael and John. Rushton used his connection, not to promote himself but to help another. With this in mind, we all must be advocates to help students who have important messages like Michael's be noticed.

Every child we teach matters. Uniquely, this modern age has given us the opportunity to take the pressure of a live audience off of students. To be fair, I believe that students on the autism spectrum should be given opportunities to create videos instead of always being force fit into live presentations.

Applause to John, Michael and Michael's mom for sharing Michael's story and the bravery that comes with “putting yourself out there.” If you are inspired,  leave Michael a message in the comments. (Notably, these comments are moderated so give them a chance to go live.)

Here's the thing about Michael that impresses me. Although Michael has autism; autism doesn't have Michael. There's a difference. This young man will tell his story to the world. As can be seen in this story, he and his Mom will help him reach out and be the best Michael he can be.

In summary, Michael and his mom have been empowered by a visionary hard-working teacher who didn't do this for the notice he would get. John Lozano did it for Michael. And in helping Michael find his voice, John is now a voice for what can be done when you use technology to embolden and empower every child.

Hats off to you too, John Lozano, you've shared a best practice that matters: using video with special needs kids. Great work!

Michael's Video: My Name is Michael

John Lozano is a Resource Specialist at Easterbrook Discovery School in San Jose, California. He used video to teach digital storytelling to a student labelled with autism. The student created a video telling others about being someone labelled with autism. His video created empathy with his fellow students about the problems he experiences.

The video is hosted on Next Vista and the music used is by Kina Grannis, who allowed her music to be used in the video.

Add John Lozano to your PLN

Every Classroom Matters is a bi-weekly Internet radio show by Vicki Davis on BAM Radio network with best practices for busy teachers.  Subscribe.

Need help listening to the show?

If you’re clicking “Play” on the BAM Radio Site, this often works best in Internet explorer. Or subscribe in a podcatcher. If you need help, use this tutorial.

All Posts »
PrevPrevious9 Defining Ways Educators Can Tug Education Back in the Right Direction
NextLaura Candler: How to Use Multiple Intelligences to Help Students See Their StrengthsNext

This is a great article that demonstrates the ways in which technology can impact the lives of autistic children. As an educator, I feel that using self-created videos allows autistic (or even shy students) the opportunity to participate in many areas that were previously very difficult to achieve. The students would be able to work in the comfort of their own homes and edit the videos to suit preferences. All students can benefit from an opportunity to speak their minds free of judgment.

I agree with you Melissa! Video helps every child share their voice! We should be using it in every school!Vicki Davis @coolcatteacher

This article is a great example on how technology can help not only special needs students, but all students in general. Some students do have a difficult time communication and interacting with other students. This is a great and easy way for students to be heard, when something so simple as talking, is so hard for them.

So true Brittany!! Video helps so many kids share their voice!Vicki Davis @coolcatteacher