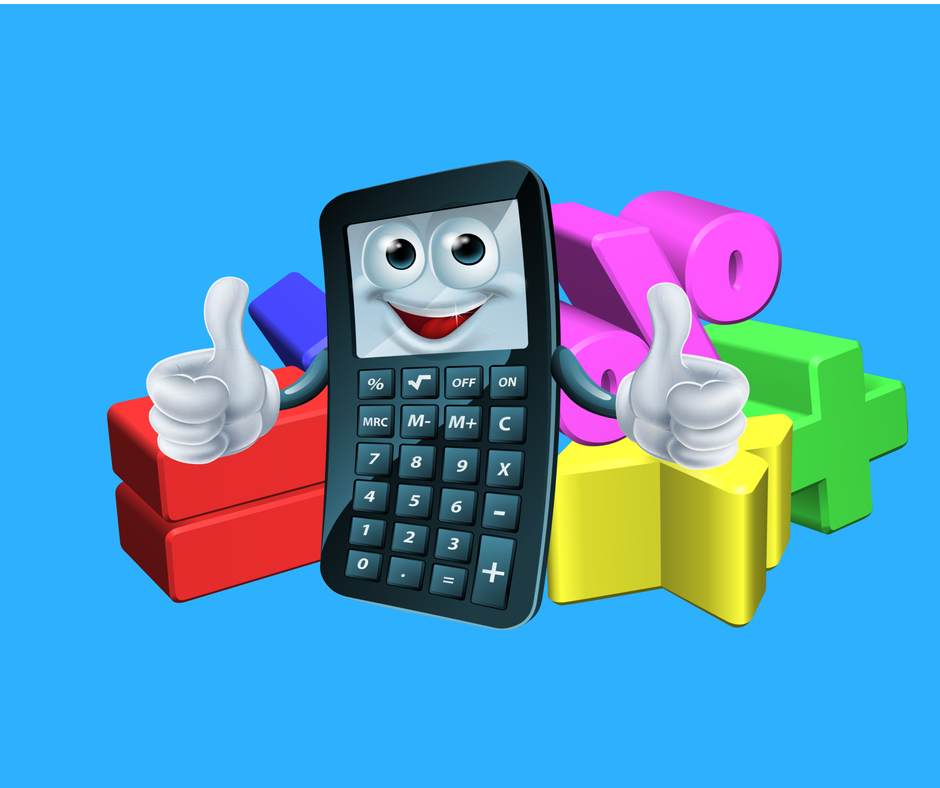 The 5 C’s of the awesome math classroom are conjecture, communication, collaboration, chaos (listen to the show and don’t be afraid), and celebration according to 25-year educator Gerald Aungst. Gerald is author of Five Principles of the Modern Mathematics Classroom and gives us an overview of what makes an incredible math classroom. 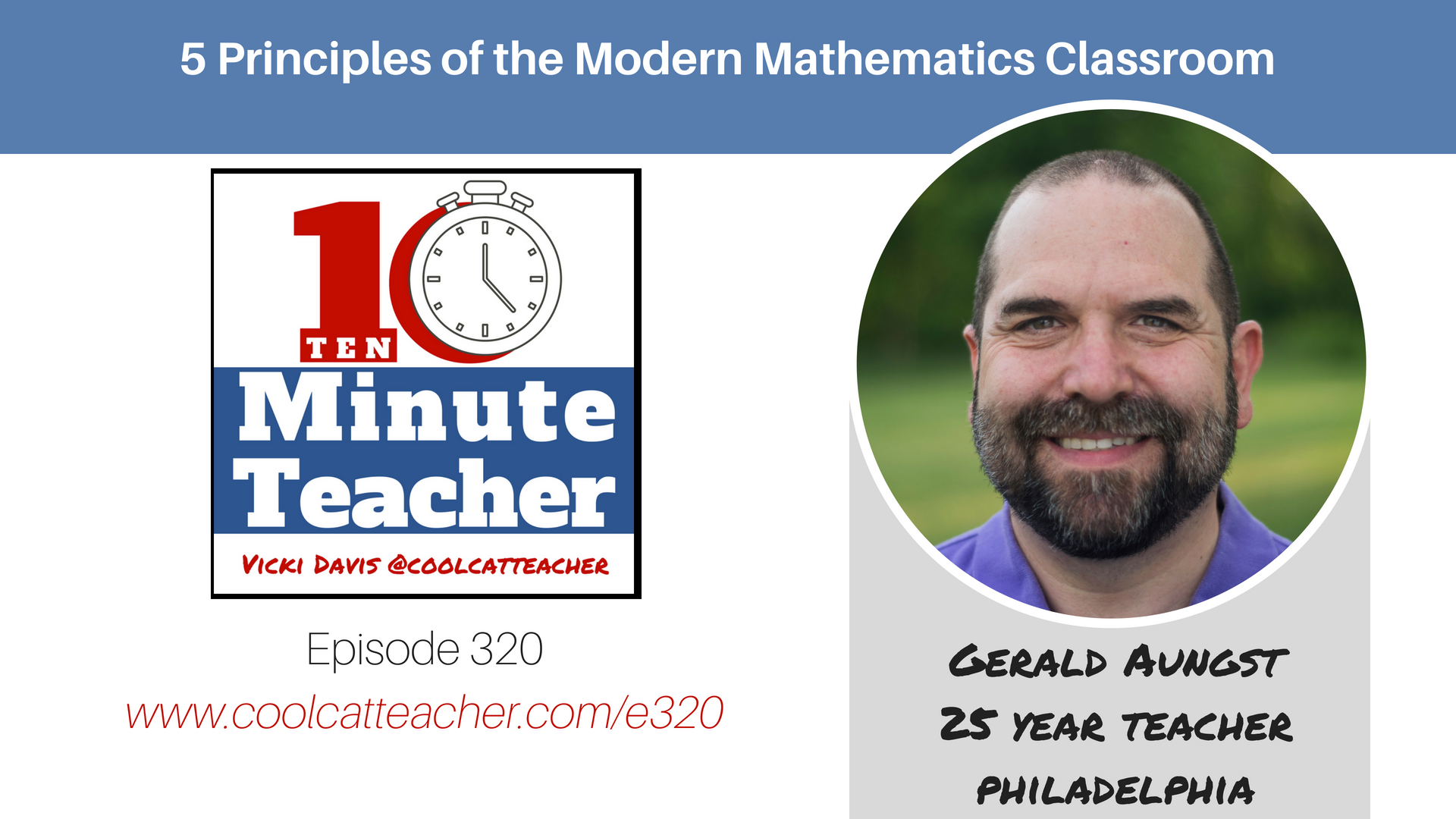 Vicki: Today we’re talking to Gerald Aungst, 28 year educator, about five principles in the modern mathematics classroom. Gerald, where do we start? What’s our first?

Gerald: The first principle is conjecture.

That’s typically the idea that, when you’re looking at math problems, you want students to be able to wonder and to pursue their curiosity to be able to ask really good questions. It’s just about being able to solve the equations that you throw in front of them.

Vicki: “Ask good questions?” Do you think some math teachers are kind of not used to good questions, and they just want kids to learn it?

Gerald: They definitely are. I think, from my own experience as a student, I loved math and I was really good at it. I felt like the emphasis was on “Follow these procedures and just learn the algorithms and you’ll get the right answer in the end.”

Someday you’ll think about why it matters and why it works and all that stuff. I think we really need to start thinking about the “why” much sooner.

Gerald: The second principle is about communication.

Vicki: Does this mean you have presentations in math class?

Gerald: It could. It also means having debates and arguments and conversations than just having a lot of pencil and paper activities.

Vicki: Wow, so what would it look like in math class? What would you be debating?

Gerald: One of the strategies that I like to talk about is what I call “Convince me”.

Vicki: Well, Gerald, we do want to tell our listeners that you have a lot more detail in your book, right? Principles in the Modern Mathematics Classroom.

Gerald: Absolutely. This is a really, really quick overview.

Vicki: Absolutely. So, what’s our third?

Gerald: The third principle is collaboration.

We tend to think of math as a solitary activity, as something we think that kids should do by themselves, that working together is not a good thing. But in the real world, real world problem solving is almost always done together. It’s almost always done collaboratively. I think we need to teach them how to do that.

Vicki: Okay, so give me an example of what this would look like besides just sitting around in a circle and solving problems together.

Gerald: An activity that I like to do is to give kids a box of stuff – maybe some random objects or maybe just some selected things I’ve specifically chosen, and ask them, “Okay, work together with your group, pick two objects out of the box, and then create a math problem that uses those objects.”

Obviously it connects a lot of that communication piece, but it’s really about working together and sharing ideas.

Vicki: Because if you really want to understand math, it’s not just about finding the answer. If you can write a good question, maybe you can understand even better, huh?

Gerald: The fourth principle is kind of a non-intuitive one. I call it chaos.

When you first hear that, you think, “We don’t want a chaotic math classroom.” The idea here is that we try to make math neat and clean and straightforward so that students don’t have to think.

The reality is, when you’re trying to solve a problem in the real world, it’s very unlikely someone else can just hand you the algorithm that’s going to work. You need to figure this out yourself.

They’re going to learn a lot more about the math that way.

Vicki: Give me an example of what this looks like in the classroom. Does the class like that you allow that productive struggle for a little longer, or is there another example?

Gerald: There’s a type of problem that I like to use. I call them “I wonders”.

I didn’t invent them, but they’re really good for this kind of problem-solving.

Here’s an example: if we filled Citizens Bank Park in Philadelphia completely with popped popcorn, how long would it take the Phillies to eat all of it?”

Gerald: What I like about problems like that is, when kids come to me and say, “I don’t know the answer. What is it?”

It’s an honest answer because I honestly don’t know the answer.

It requires them doing a lot of estimating, a lot of reasoning, and possibly even some research.

When I went through this question with fourth graders once, they immediately wanted to go do some research about how much fan people eat.

It takes kids off in interesting directions you might not even anticipate, but the mess of it allows them to do some really deep reasoning that they might not do otherwise.

Gerald: The fifth principle is celebration.

It’s not the kind of celebration where it’s a trophy and you pat everyone on the back. It’s more about celebrating effort, growth mindset, making sure that we recognize the value of mistakes. Learning happens when you make a mistake and then you figure out what you did wrong. Less learning happens if you get everything right all the time. It’s really about celebrating when learning takes place and recognizing when that learning takes place.

Vicki: Celebration is just so important in every single classroom. So, what do you think is the biggest mistake in the modern math classroom that you wish you could just kind of ??????? teachers?

Gerald: I think the biggest mistake that I see and that I have seen… is teachers who believe that math is about that linear progression from you get a problem, you work the algorithm, you get an answer, and then you just continue to repeat that.

If more teachers understood that math was really the language of problem-solving and that it’s a problem-solving process, I think we would have a lot better math instruction going on.

Vicki: Gerald, you’ve been teaching twenty-eight years. If you could backtrack and talk to Gerald the first-year teacher, what would you tell him about being a great math teacher faster?

Gerald: I think the first thing I would say is “Put down the teacher’s edition of the textbook and give a lot more examples to kids of really rich, really interesting, really deep problems that take more than a minute or two to solve.” Problems that you might spend an entire class on one problem, or even an entire week on one problem. Be willing to take the time to dig into some really significant problems and spend some time on them.

Vicki: Wow, that sounds kind of intimidating. Sounds like people are going to get the book, Five Principles of the Modern Mathematics Classroom. You know, educators, it’s all getting what we’re doing.

Conjecture, communication, collaboration, a little bit of chaos, and a whole lot of celebration are things that we can use in every single classroom in every single subject.

So thank you, Gerald, for these fantastic principles that really all of us can apply.

Gerald Aungst is a “curiosity engineer” with more than 25 years of professional experience as an elementary teacher and curriculum specialist who empowers learners through inquiry and making.

Gerald is currently a gifted support and makerspace teacher at Cheltenham Elementary School in suburban Philadelphia. He is also one of the organizers of Edcamp Philly (http://www.edcampphilly.org) and a founder of All About Explorers (http://www.allaboutexplorers.com).