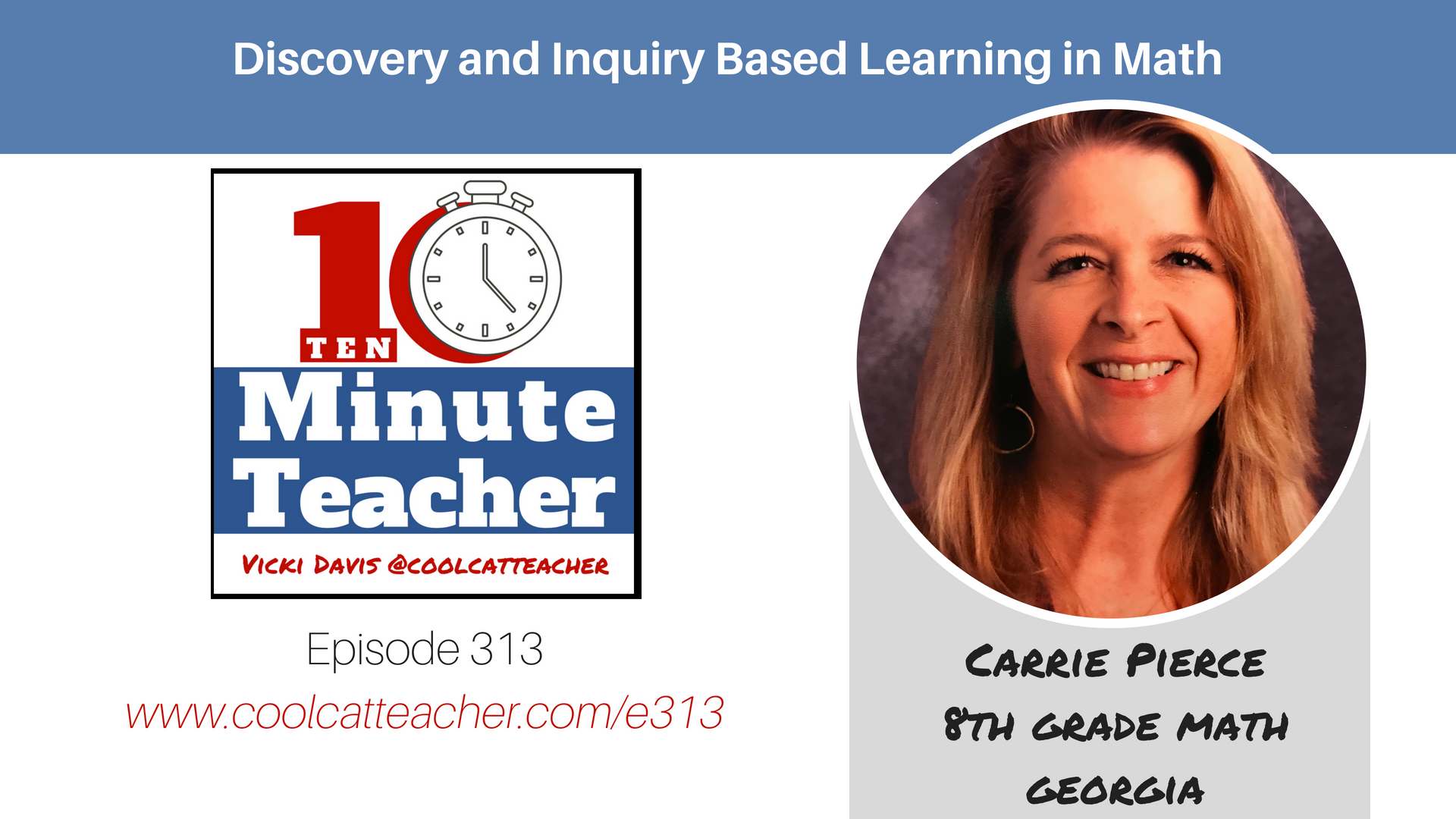 Eighth-grade teacher Carrie Pierce uses discovery and inquiry-based learning in her classroom (and no textbooks.) Dig into how she makes math marvelous!

Discovery and Inquiry-Based Learning in Math

Carrie is just up the road from me. She lives in Edison. She’s at Lee County, just one county over. Two counties over from me here in Mitchell County in Georgia.

So Carrie, let’s talk about how we can have discovery and inquiry-based learning in the math classroom. How do we do it?

Carrie: Well, it is a challenge.

One of the things that I try to do as I plan my lessons is to start at the end.

Start with the end in mind

I always have to think of what is it that I want the kids to know, what do I want them to learn, and how can I get them there using what they already know.

I think it’s really important to build on that prior knowledge whenever you can, but then tweak it just a little bit, to ask, “What if we did THIS instead? How would that number change this equation, or change the situation?” And try to get them asking the questions and get them excited about what they want to know.

Vicki: Carrie, this is more than just a math textbook, right?

Carrie: Absolutely. I don’t really use a math book. I have not touched one in probably fifteen years.

I teach from the standards, teach lessons that I have compiled and created and borrowed and adapted and tweaked throughout the years. And of course that changes with each group of kids. Everything runs differently the longer you do it.

Vicki: Okay, so “Discovery in the Math Classroom” Help us understand what you mean by that, because discovery and math don’t usually go together, right?

When I was growing up and learning, we had our topic. I guess these days it would be the essential question (EQ) that you put on the board. The EQ was on the board.

The teacher says “Today, boys and girls, we are going to learn about functions,” and then launches into the lesson. “Here’s what it is, and here’s what it isn’t. Now work some problems.”

A common catchphrase that I hear teachers say often is “I do, we do, you do” and in my opinion, that’s not the best way. I like for the kids to wonder.

So instead of introducing the lesson with how things work, I might have a mini-lesson or perhaps a “Do Now” on the board to get them to ask the question, to get them to wonder. I might say, “Hey! What happens if… “ and then let them fill in that blank.

Vicki: So does this blow kids’ minds when they come into your classroom? Maybe they haven’t experienced this before?

One of the things that I do often is we’ll practice the problem for a little while, and I get them working.

We don’t start with notes. We don’t start with examples. That comes at kind of the middle of the lesson. Once they’ve tried it and kind of gotten their feet wet a little bit, then we’ll put our notes into our active notebook. Mainly that’s something for them to refer to if, you know, they have to take some practice home or to look back later in the year if they need that for a reference.

So definitely there’s an adjustment period.

Vicki: How do you start the class? You start with inquiry? Discovery? Very beginning of class?

Carrie: Well, usually the way I run my classroom, we do have our EQ on the board. They have their Do Now question, their bellringer, warm-up, whatever you want to call it.

And they come in, they kind of get settled. Now the Do Now could be a review of last night’s homework, but usually when I’m starting a new lesson, I’m trying to think of something that’s going to build on some prior knowledge. I try to think of what have we done yesterday, or in a previous lesson, that I can put up here and use, and often it just launches into my mini-lesson.

Vicki: Okay, so it launches into your mini-lesson, and then you’re always asking questions, trying to get them to inquire. Do you ever have your students come up and just ask you a question out of the blue, that leads to some math discussion?

Carrie: Absolutely. As a matter of fact, I have a really hard time planning.

My administrators want me to have my lesson plans a week in advance.

And it’s not realistic because kids do wonder and they do ask, and often the lesson or the class takes a different direction. We still get our same standards done, and we still have great discussions.

But maybe we wanted to do a different activity than what was planned or was already copied. It’s really amazing to hear how they think.

And I’m always amazed at sometimes how children will approach a concept that I would have never considered because I’m trying to do it a certain way.

Try to hear what they’re thinking

And so as teachers I think we tend to teach in the way we’re taught, how we were trained to think about things, but to allow a child to discover a concept on their own and put it into their words is so powerful.

Vicki: Carrie, what’s a mistake you’ve made with inquiry-based learning that you would like the listeners not to make?

You have to be comfortable enough as a teacher, to be afraid to fail, so to speak, in front of the kids. Sometimes you think what you’ve planned is an amazing lesson for them to do, and it just bombs. They’re just not ready for it, they don’t make the connections that you hoped that they would make, for whatever reason.

You have to be confident enough to fail

Vicki: What does it look like when inquiry-based learning and discovery in the math classroom goes right?

They are teaching themselves. All I have to do is walk around and ask a few questions, and try to get them talking and communicating with each other and having those discussions.

What it looks like is the kids have taken ownership of their learning, and whether or not I was there, it would still happen.

Vicki: Do you ever have kids who used to hate math change your mind?

Carrie: I do. And I had a child who, yesterday, we were doing a complex — this was one of my algebra classes so it was a higher, higher level and it had a lot of plugging in and crunching numbers and (inaudible- FOILing?) and multiplying. We got to the end of the problem — it was just algorithms and one thing after another — and we got to the end, he said, “Huh. That is so satisfying.”

Carrie: It was so funny. It was like he put the puzzle together. I thought, Oh my gosh. I love that. He sees that, and he’s got it.” It was just so cool to watch that.

Vicki: Carrie, if you could travel back in time and talk to Carrie Pierce on her first year of teaching, what would you tell her?

Carrie: I don’t know that we have time to address all that.

Carrie: You learn and you grow, and every year is different.

Your life experiences change the way that you see children. I know that, as my daughter grew up and got to be the age of the child that is in my classroom, my perspectives changed and my focus changed. We constantly evolve and grow.

I think I would tell myself to give them a break. Sometimes they are just kids, and a lot of times, I think perhaps new teachers maybe expect too much. I know I did, coming straight out of college.

And you have your own classroom for the first time, and I was ready to go, and it was all about the content, content, let’s get it drilled in.

Eighth grade, ninth grade, high school, they’re just beginning to see the “whys” of all this deeper-level content — see it apply to science, or analyze a graph in social studies.

I would tell myself to take it easy and to let them be kids and try to grow. Instead of me giving it to them, let them seek it themselves.

Vicki: Yep, you’ve got to relate before you educate, as I very often say, and it is about the relationship.

I’m so glad for people who were kind and patient with me when I was a beginning teacher. (laughs)

I know you are too, and so we always have to remember that.

But even when we’re beginning, we do have to remember that it does get better and when you start having those relationships, that’s really what keeps you teaching, in my opinion.

So, teachers, we’ve got lots of interesting things to think about with discovery and inquiry-based learning in math. We can really use that in every classroom, because we want students to inquire. We want them to discover. We want them to ask questions. 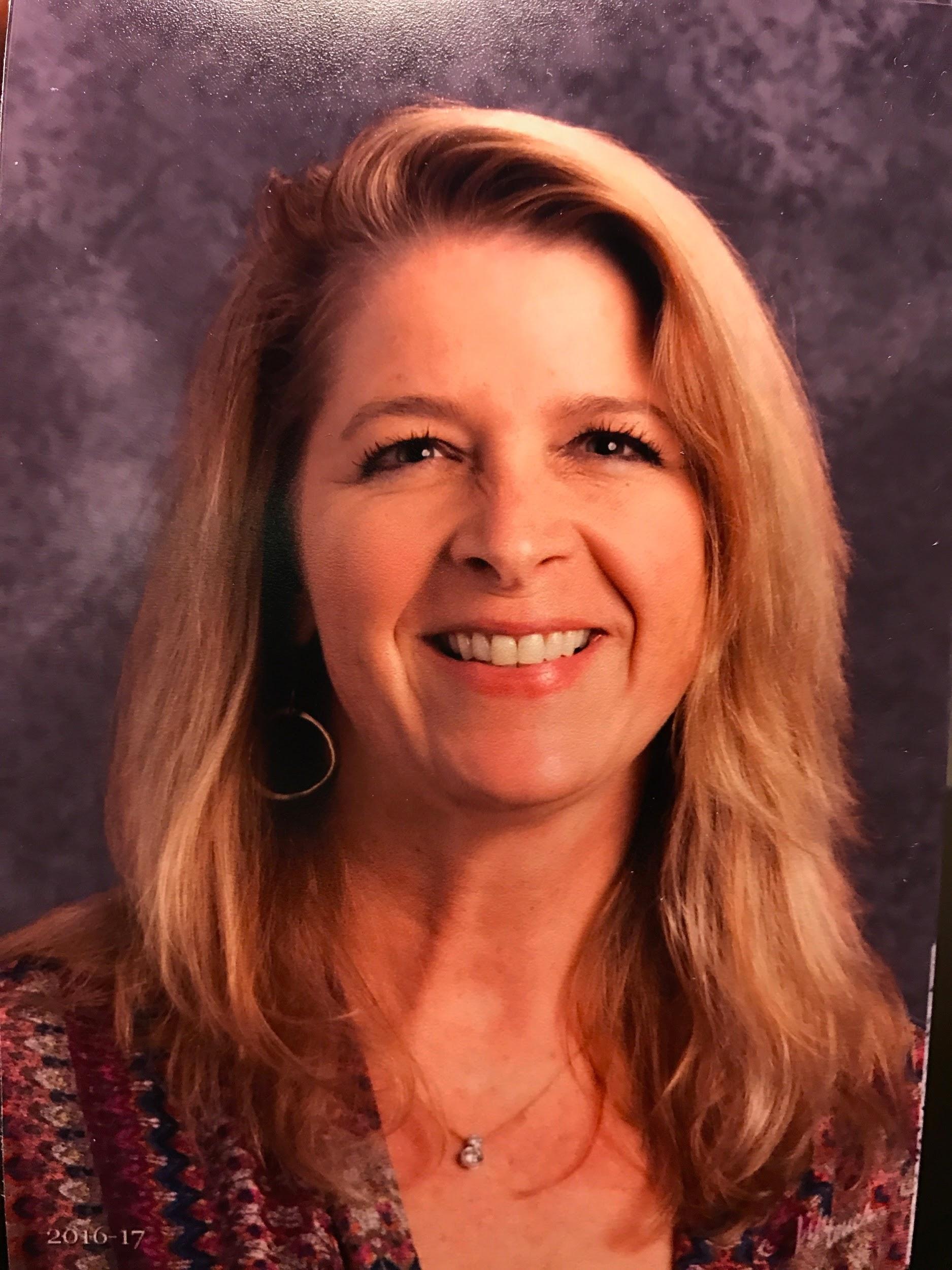 Carrie is a veteran middle school teacher with over 20 years of experience, who incorporates discovery and inquiry based learning into her 8th grade math classes.