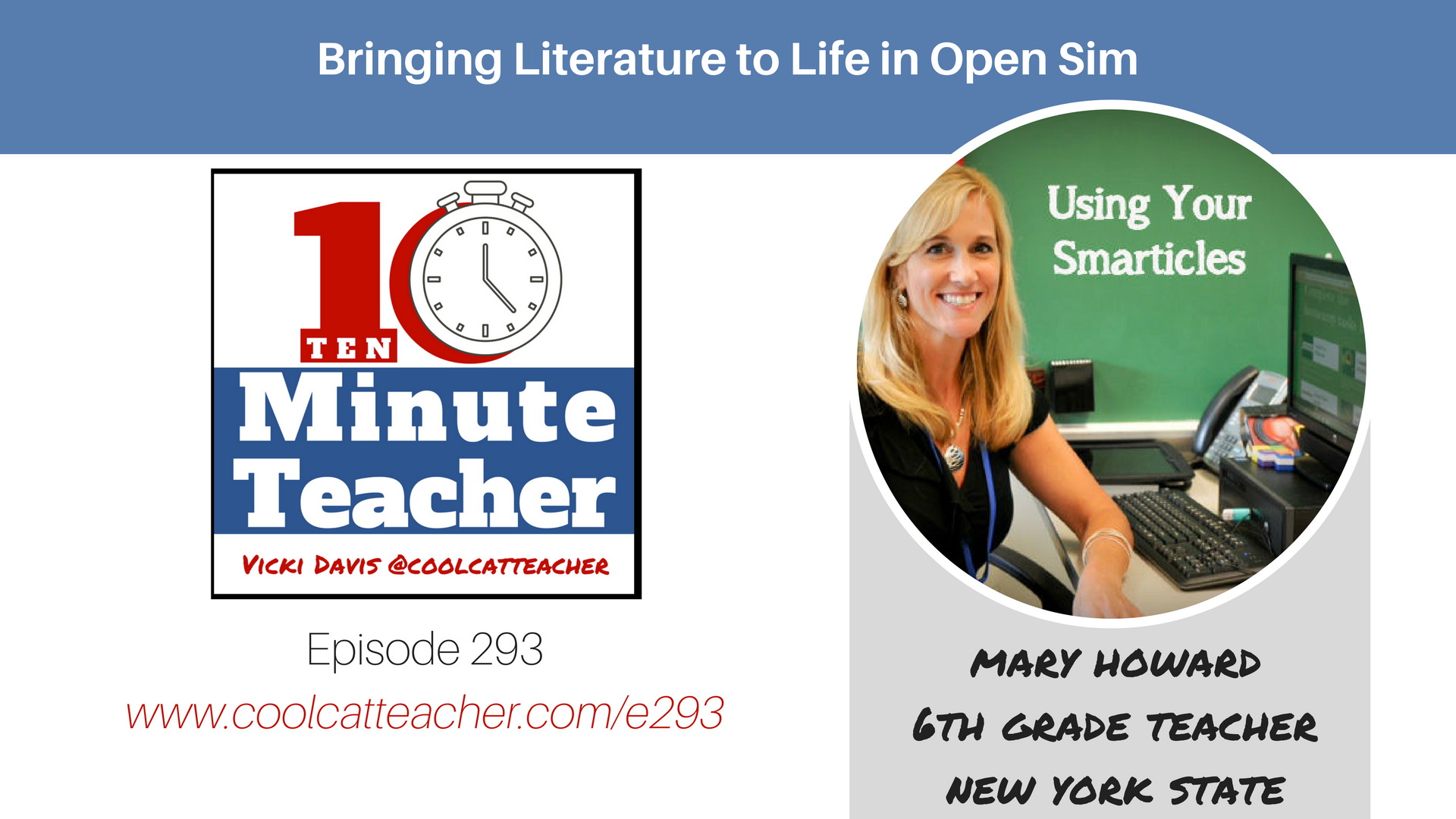 Mary Howard’s students build and learn in Open Sim, a virtual world like Second Life. From building architectural constructs to understanding the Diary of Anne Frank, literature comes alive in this virtual world. 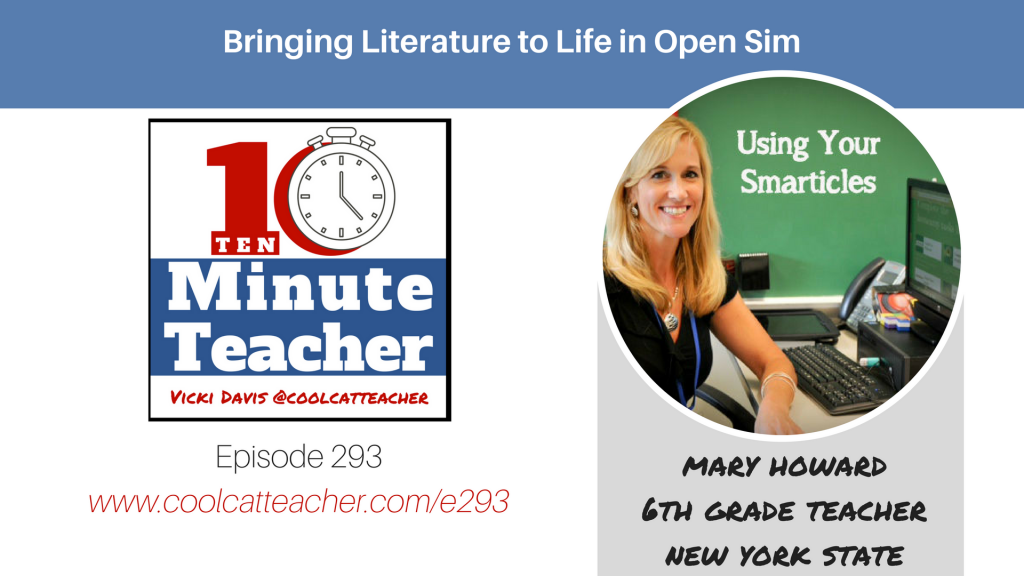 On April 26, celebrate PowerofEcon on Twitter with Discovery Education, CME Group, and their Econ Essentials Program. We’ll have free resources available for downloading. To join the celebration, tune into the Twitter chat with me, fellow teachers, and the CME Group’s chief economist on April 26th at noon Eastern Time, using #PowerofEcon.

Visit www.coolcatteacher.com/econ for more information and remember to tweet out your pics about how you teach your students using #PowerofEcon.

Vicki: Today we’re talking with Mary Howard sixth grade teacher in New York State. She was a finalist for New York State Teacher of the Year for this year, 2018.

Mary, you are bringing literature to life in Open Sim.

You and I were actually talking before the show. I used to do some work at Open SIm, and people really pushed me toward Unity. I found it to be really hard.

What is Open Sim? It sounds like there are still people using it, huh?

What is Open Sim, and is anyone still using it?

Mary: Yeah, there’s still quite a few educators, especially out in the trenches, using Open Sim.

We hear a lot of talk now in Ed Tech circles about how we can get these students engaged and speak a language that they’re speaking. Really an Open Sim (simulator) is a great way to do that.

Vicki: So educators, think about (how) some people host their own Minecraft servers. This is in some ways like Second Life. It looks a little bit more realistic than the pixelated Minecraft types. A lot of really cool things you can do in Open Sim, even though some people have pushed toward Unity.

So what are you doing with Anne Frank and teaching literature in you Open Sim world, Mary?

Mary: Yes! Well, the students have this world that they go into. The platform is held at a server with our local district.

Like you described, just to give people a little more of a background, it’s really great for middle schoolers, because by the time they’ve hit sixth and seventh grade, a lot of them have moved on beyond Minecraft, or they really can’t get their heads around the fact that a teacher is using Minecraft.

I always say to the students, “It’s like Minecraft on steroids. We’ve gone away from the pixelation, yet we still have the power of the building and construction,” which really speaks to students’ creativity.

So in the program that I use, the Anne Frank house was actually re-designed in the virtual environment for the students to visit. So they go into a reconstructed Anne Frank house.

They read, of course, the companion novel that goes along with it, and they’re able to sort of “see” and visualize what’s going on in the novel.

Yet they’re also able to build and construct their own reflective pieces within the virtual environment. In one case, a student actually built a World War II bomber and placed that in the Anne Frank Museum that’s in the virtual world.

So, there are just so many ways to be more hhands-onwith the novel when you’re using a virtual environment.

Vicki: What are some of the things that students are really taking away, that you couldn’t get from just a class discussion about Anne Frank?

The virtual environment group that I work with — this Open Sim group — I actually don’t do the Anne Frank house.

I do an extension off of that, which came from the initial project. It was a three-year project. Several teachers began the Anne Frank that’s actually in our seventh and eighth grade curriculum in our building.

But then I began the project in this Open Sim environment with “An Era of the King.”

So you sort of have to imagine the Middle Ages and Medieval Times, which is the curriculum that I teach.

Teaching the Middle Ages in a virtual environment

It’s great to teach the Middle Ages to begin with — you have your knights and kings and queens and castles — but it’s even better when you can bring them there!

So I had thirty kids in the computer lab. They’re all in there as an avatar, wearing Middle Ages clothing, walking around a Middle Ages village.

Then of course, the curriculum is gamified, so they have different levels of challenges that they have to engage in — which are knowledge based — in order to learn the curriculum, but also succeed in the virtual world.

So when you asks questions about what do the students get out of it? It’s just this whole package of things. It’s taking curriculum, making it engaging and exciting. and putting it at a level where the students are genuinely coming from nowadays

Vicki: So you’ve been using this for a while. Are there any mistakes you’ve made in the past?

Are there any mistakes we can avoid?

That conversation could even be longer than the successes. (laughs)

Mary: I think that just comes with technology. People ask me, “How do you do all this tech stuff?”

And the first words I say are, “Be fearless.” You have to just be willing to let it go and be willing to understand that mistakes and accidents will happen.

Our first experience, the very first time… I was so excited to get these students in the Open SImulator. We sat there on laptops in a classroom, and I tried to get all 25 students online at the exact same time.

We overloaded our system. No one could get on. Everybody was raising their hands and kind of whining, “It’s not working. It won’t let me in.”

It was just one of those high stress moments like, “Oh no. This is an absolute disaster.”

And those are going to happen.

As you know as a tech person, you really have to be fearless and just understand, it’s going to happen. But you can’t break the children.

Vicki: And, it’s a learning process. I remember one thing I had learned is to try to get the kids in ahead of time to create their avatars, just because that tends to put some strain on things, and you know, it just takes time to learn this stuff.

So what have you done right, Mary? What’s one of the big things that you’re like, “Yes, this has made a huge difference.

What is your favorite project, where you knew you totally got this right?

Mary: Oh, I love that question!

I worked with a local BOCES person to set up an opportunity for the students to actually build in the style of Frank Lloyd Wright.

We gave (the students) (virtual) land, and we gave them an opportunity to learn about the architectural principles behind Frank Lloyd Wright.

Then we took them on a field trip to the Darwin Martin house.

As we were walking around the Darwin Martin house after spending a couple of weeks discussing the architectural principles and researching Frank Lloyd Wright and what he does, seeing and hearing ten year olds say things like, “Look at that abstract design,” or “See how he incorporated this central hearth in this home.”

Hearing that language manifest itself right on site, but then going back to the virtual environment when we got back to school, and seeing the excitement that the students had, designing and creating homes in the Frank Lloyd Wright form…

It was just the most magnificent and rewarding project that I think I’ve ever done with students. It’s just a really exciting thing to see what the students could build and design when you let them go, and let their creativity blossom.

Vicki: OK, Mary, to all the teachers listening to you… Give them some encouragement to try something virtual.

I mean, there are so many ways you can do this. There’s Open Sim, of course there’s Minecraft.

Some people are doing the Google Expeditions, and that’s great. But we need to understand here the differences. They can actually build. They can sandbox. They can create.

So, what’s your pep talk to teachers for utilizing this type of immersive technology?

And I also say, “Be that rogue teacher.”

You know, be the lady in the corner of the building that has all the cats, because if you are that person, you take the lead.

Your tech department will find a way to make these things happen. And once it happens, the explosion in creativity is so worth it.

And it’s really a paradigm shift.

You have to realize that it IS the curriculum.

This one element happens.

If you get out there and explore and make it happen, all of that other stuff that you’ve been worried about with your students?

It falls into place.

Vicki: That is great advice for us, remarkable teachers!

Now get out there it make it happen! 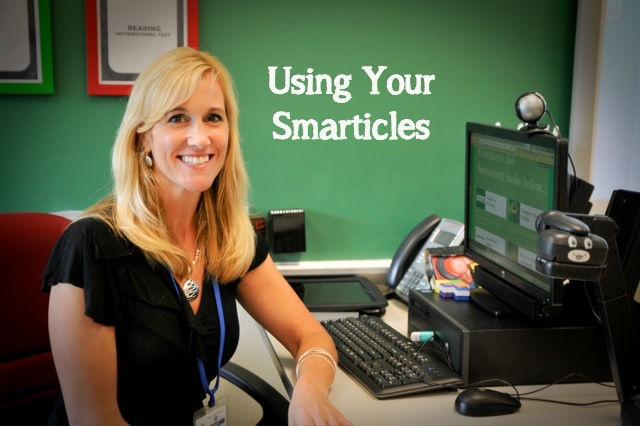 Mary Howard is a sixth grade teacher in Western New York State and was a finalist for the New York State Teacher of the Year for 2018. She considers herself a FEARLESS educator and an early adopter of many EdTech initiatives. Mary attempts to create a culture of inquiry in her classroom and hopes to build future innovators Her blog, http://www.yoursmarticles.blogspot.com features many of her EdTech pursuits including an Augmented Reality Sandbox that she uses in her classroom, makerspaces, coding as well as the use of Virtual Reality/Virtual Environments in her classroom. Mary is also a specialist in engagement, and uses digital tools to engage students and ignite their learning. She has presented throughout New York State and numerous other conferences including MACUL (Michigan) and at ISTE Philadelphia, Denver and San Antonio.