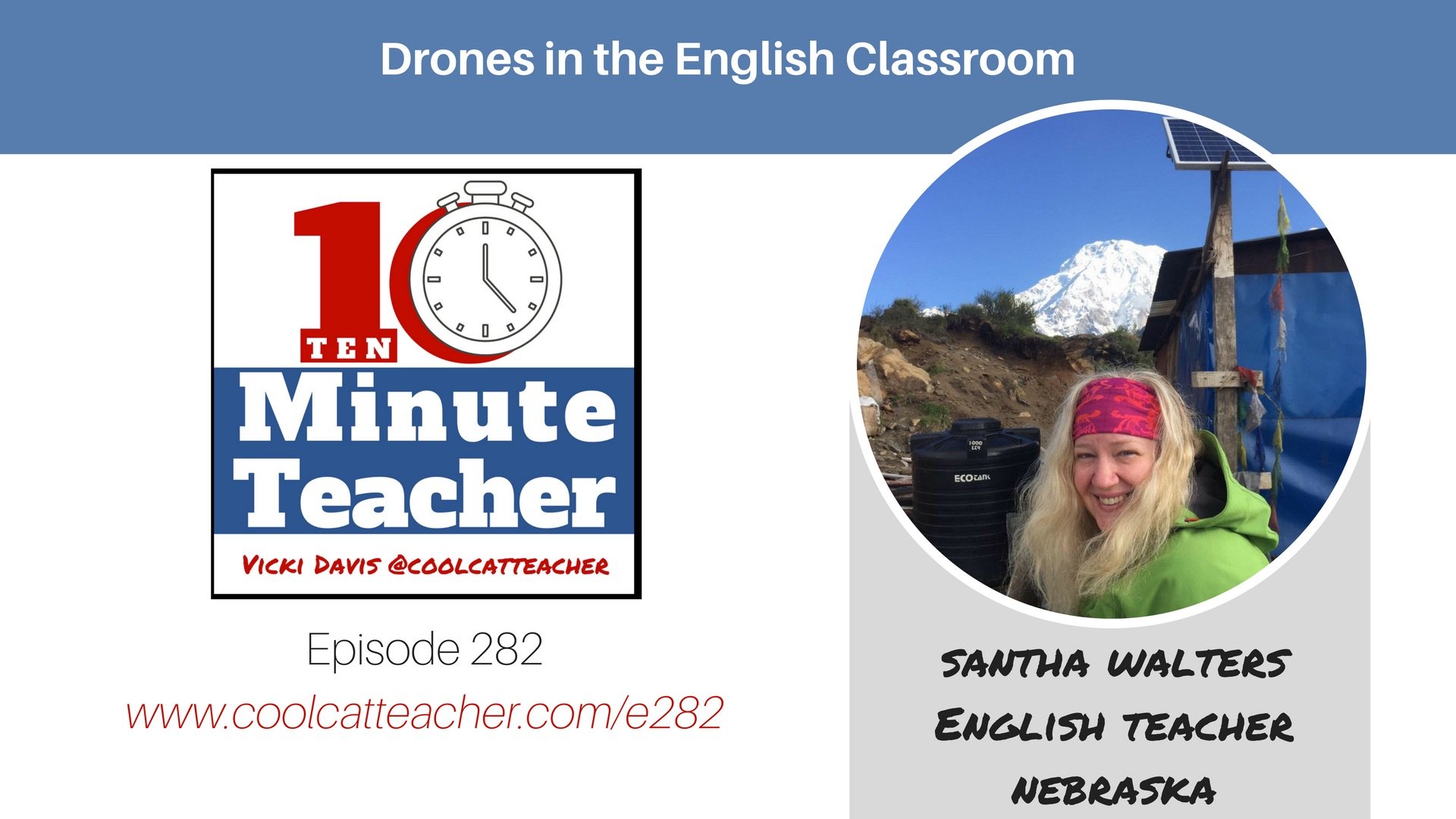 Drones in the Classroom: Teaching Writing and Collaboration with Drones

Home » Education » Drones in the Classroom: Teaching Writing and Collaboration with Drones

Santha Walters uses drones in her English classroom to teach writing, collaboration and more. Learn how she does it, what standards she teaches, and technical issues of working with drones in the classroom. 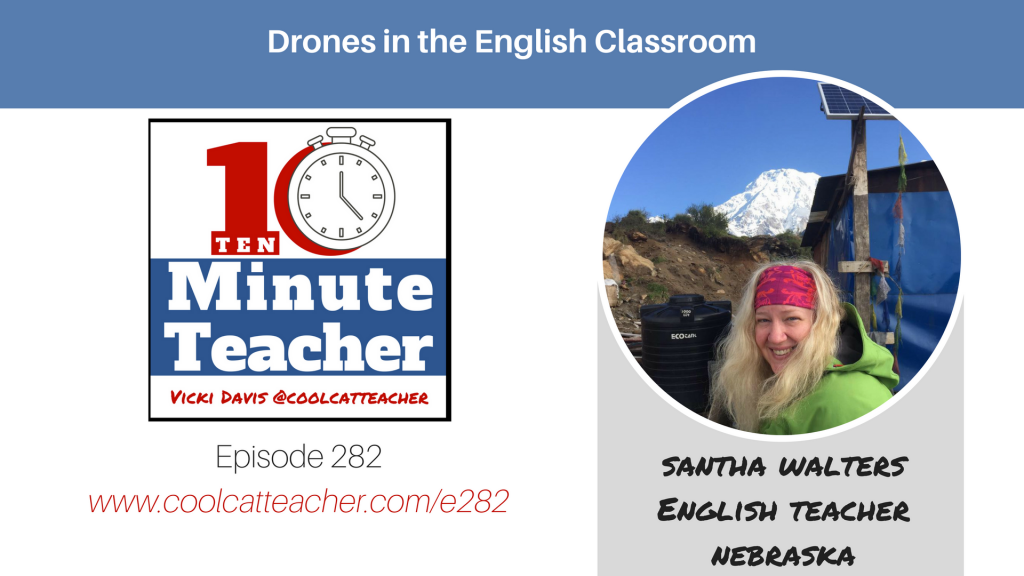 Free Webinar! This Thursday, April 4 at 2pm ET/11 am PT join me for 12 Tips for Building Your Digital Classroom sponsored by PowerSchool. Register at coolcatteacher.com/digital today.

Drones in the English Classroom

Vicki: Santha Walters @santhawalters is an eighth grade English teacher in Nebraska, and she uses drones in her English classroom.

Santha, what on earth are you doing?

That’s a really great question! Sometimes I need to answer that one, myself.

Last week we brought in three flying drones. They’re the Parrot Mini Flyers. They’re (Cargo? Carca? Karka?) drones, so technically they can carry a load. But we brought in new jumping drones into the English classroom.

We brought in flying drones and jumping drones

The unit was called, “It’s All About Communication”

Vicki: So, “communicate their ideas” for what? Programming needs? Some sort of obstacle course? Are they competing? What are they doing?

Santha: YES! I think would be the answer to the question.

The first day, we got familiar with our droids. We talked about our different roles. We had teams, and they got to pick their own teams, But everyone had a job, whether it was historian, videographer, pit boss, timekeeper. Everyone had something that they had to do within the team. The challenges varied by day. 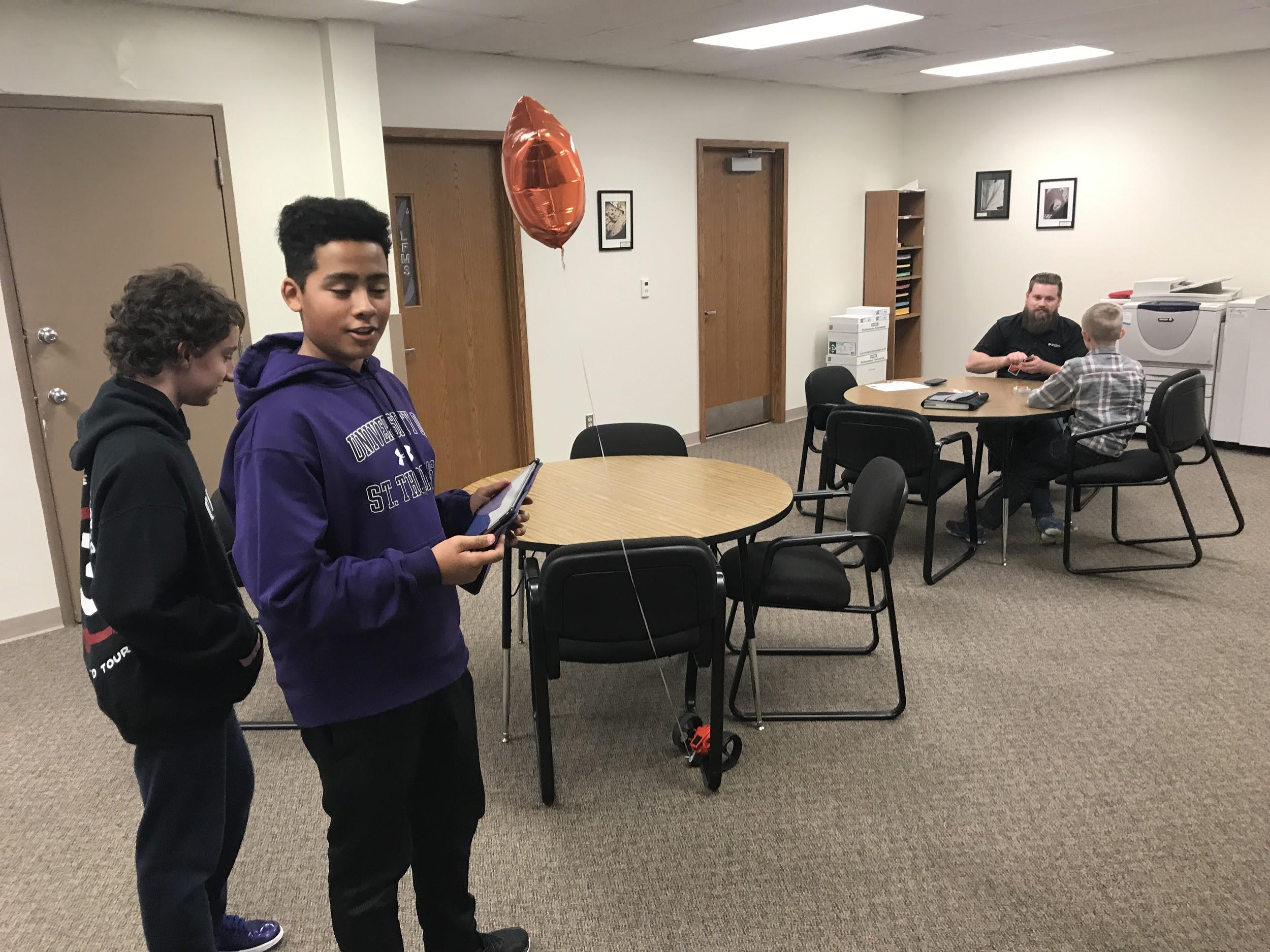 So like the first challenge was making our team and getting our team moving in one direction.

The next day they came in to pre-designed obstacle courses, where they had to find the golden statue with the roving jumping droids, or fly through hula hoops with the flying droids.

And then the next day, they took on that role themselves of becoming the leader, as they design the obstacle course for other teams. They switched out. It’s just too much fun! (laughs) Really too much fun.

Vicki: Awesome! OK. So let’s say someone comes in to observe, and they say, “Santha! What standards are you meeting using drones in your classroom?” What would you say?

What standards are you meeting using drones in your classroom?

What better way to do that than to create their own medium? They have to become the teacher. They have to communicate. Who is the audience? Is it their team member? Or is it another team? Do they want the other team to have as much information as they might give a team member?

So all of this type of discerning and analyzing information for the best method to convey — whether it be via a picture or a video.

So, not just hitting what type of representation — should it be a chart, should it be a graph, a paragraph written with instructions. So not just being able to pick the mode, but pic the best — to be able to communicate that different audience. And it seems like for writing, picking your audience and being able to deliver to your audience the specific set of knowledge, is the whole point. It’s the whole point of English instruction, being able to communicate with one another. 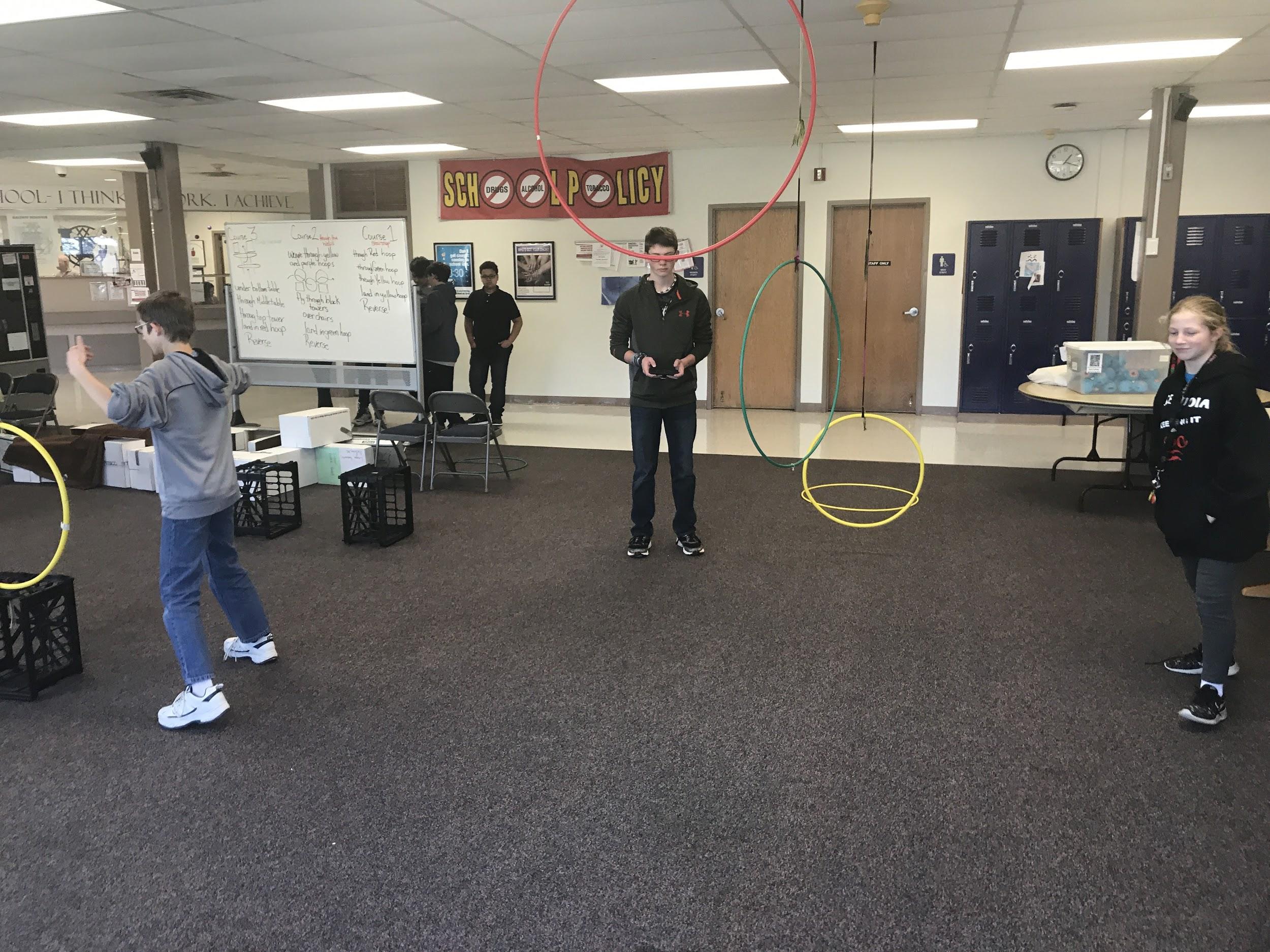 Vicki: So Santha, obviously some teachers might have some safety concerns about drones in the classroom.

Vicki: What are some general guidelines for when you bring drones into the classroom to make it safe.

That is a very, very good and valid concern. I have to say that after moving 103 students through the drone last week, the only one who needed a Bandaid during the entire time was me (laughs). I broke my own rule, which is, “Watch out for flying droids.”

We do an introductory safety montage video for the kids, and then we get them to say the phrase, “Watch out for flying drones.” (laughs)

For some of the lower drones, we attached balloons to them so we wouldn’t trip over them. So the balloon would actually be at eye level so that we could see it.

We did drill safety the first couple of days

But we did drill safety the first couple of days. There was a 3-consequence system. If you were caught not being appropriate with the drone, you have to sit 10 minutes with me on time out, email home, and then we were going to take points from you. So they had a lot of tips to do the right thing. They mostly didn’t want a time out.

Vicki: Yeah. Did anybody have to get a time out?

Santha: No! We had a broken table. (laughs)

Vicki: Yeah. I’ve used drones in my classroom before. I think the stress with safety is just important. Some kids might think it’s funny to “buzz” — if you’ve ever seen an aircraft “buzz” the field, where they do a fly-by really close to the tower, which is not good thing — kids can do that to each other, and it’s really something you want to discourage, right?

Santha: Oh, absolutely. And the fact that their entire team is kind of… well… This might sound kind of strange, but we weren’t doing this for grades. There were grades associated with it, and I have a whole safety thing and a checklist of things they had to learn and all. But they were doing the majority of these projects for “stamps” which is the currency on our team. It’s kind of a PBIS thing. So if they did what they were supposed to do every day, they got 10 stamps. That was an opportunity for 50 stamps. That’s enough for a soda, on our wing. So this was high stakes stuff, so nobody wanted to lose stamps. You know?

Vicki: Yeah.And it just seems like it was a lot of fun. So what is the thing that you did the most right? What is something that you’re, “OK, like THIS was the best part of this unit!”

Santha: As always, people ask for specific things that teachers can take and run with. Stop being afraid of failing, because failure’s going to happen. Embrace this droid unit. When I brought these droids into the classroom, I remember the first thing I thought was, “Remember, it’s going to mess up. It’s going to fail. There will be a failure at some point.”

But if you let kids help you process all of it, help you troubleshoot, you find new ways. 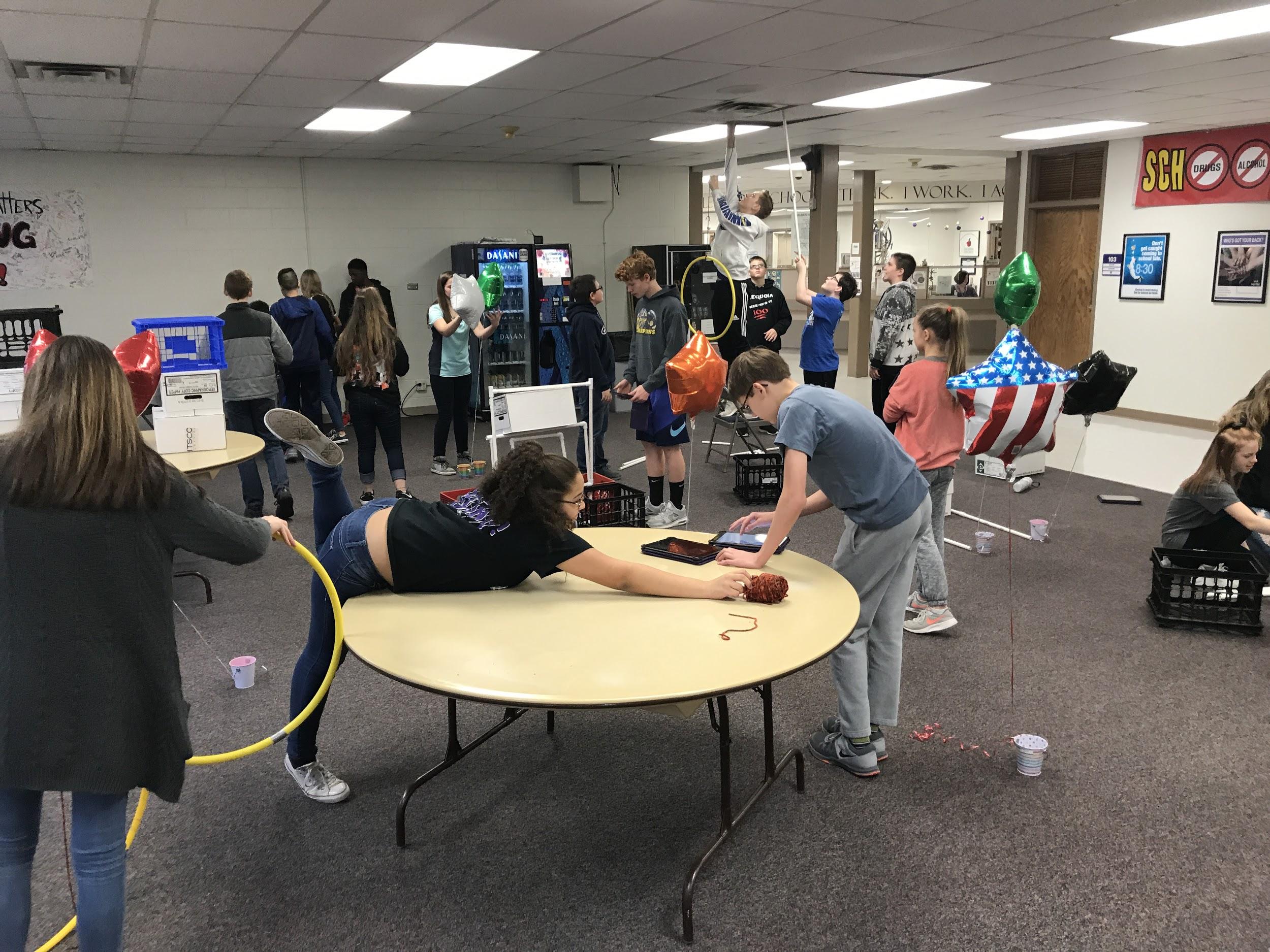 Do fewer pre-designed and structured activities after the first day

One of the things I learned was that I was working too hard the first couple of days of the unit. I was coming in, putting up obstacle courses, making this and making that. THEY wanted to design that. They wanted ownership of it. So I realized that a little bit too late. (laughs)

Santha: I should have let them work harder and me work less.

I think it was great, for the very first lesson was very, very structured and very,very regimented. But as we went forward, probably their most creative work was them designing their own obstacle courses, hiding objects for other students, making directions to go with them, writing riddles to give them hints. That was what I think I got right — which was me really doing nothing at all. (laughs)

It was listening to where they were leading me, and then going, “Yeah! That’s what I’ve been thinking all the while.”

Vicki: So Santha, do you have these lesson plans, or have you blogged this so we can include those?

Santha: Oh yes! I’ve got to do that actually, That is on my list of things to do. We’re just finishing up today. They will be up by the new year, so I will make sure that you get a copy of that on January 1st.

Vicki: Awesome. OK, well, educators, just remember that you can use technology in any classroom. Santha is a great example of using drones in the English classroom. That’s amazing.

You can use technology in any classroom

Santha: Thank you! Have a great one.

I am Santha Walters and I teach English in Bellevue, Nebraska. I've taught everything from 6th grade through 200 level college courses in English in the last nineteen years. It's been a fun journey and I”m ready to share my experiences with the world. 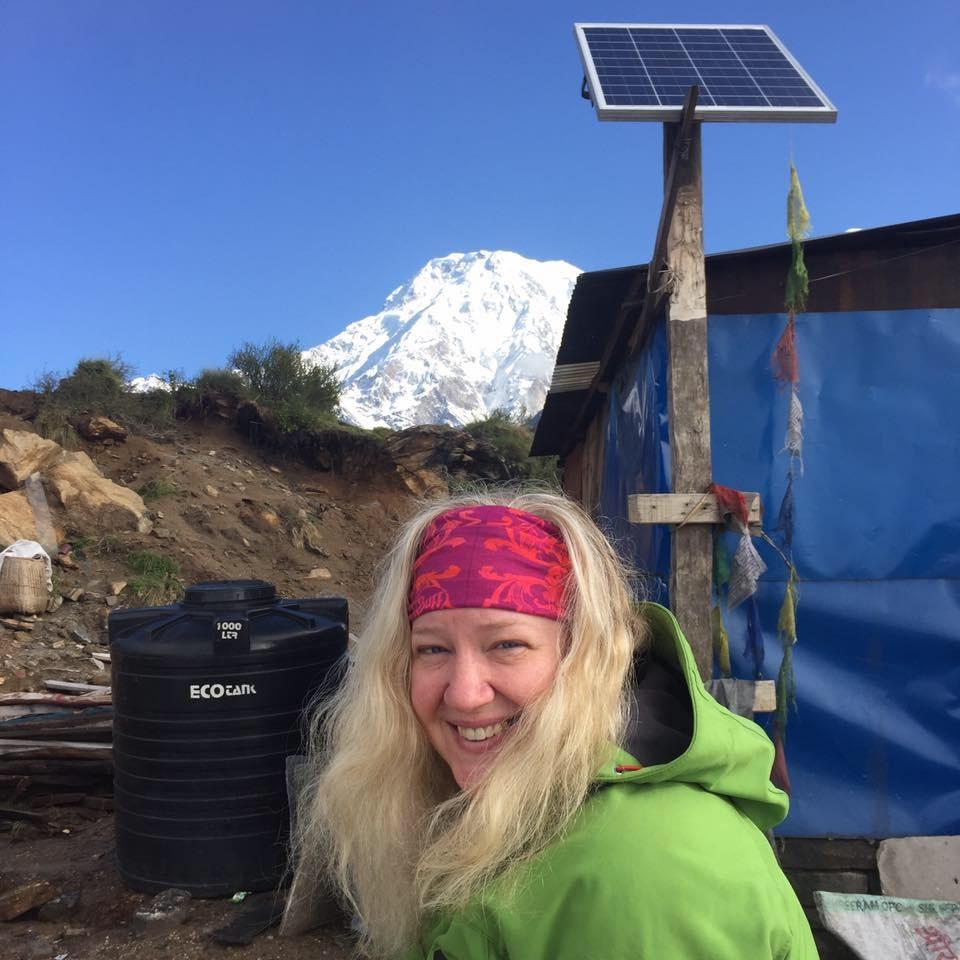 I was educated at the University of Alabama and graduated with an undergraduate degree in Russian Language and Literature in 1993. During that time, I participated in the Study Tour of the Former Soviet Union and lived in the Russian House. After graduation, I pursued and obtained my Masters in Secondary English Education.

With my post graduate work completed, I began working at Shelton State Community College where I taught classes as adjunct faculty for the English Department, the College of Continuing Education and the Community and Corporate Education Department.

From there, I moved to the secondary world and bounced from Alabama, to Tennessee, to Virginia and finally settled in Bellevue, Nebraska, where I teach 8th grade English. I love using technology in the classroom and believe computer literacy is as important to this generation as reading literacy was to previous generations.

Thanks for all the wonderful information you are sharing via podcasts / transcripts and your blog posts.

I am taking Georgia Online Professional Learning Class to add to my teaching certificate. Recently, I wrote a blog post for how innovation in technology has changed my communications as well as Classroom communications. As part of the post, I have linked your blog.

Let me know if you would like me to give you attributes differently. I appreciate feedback from you.