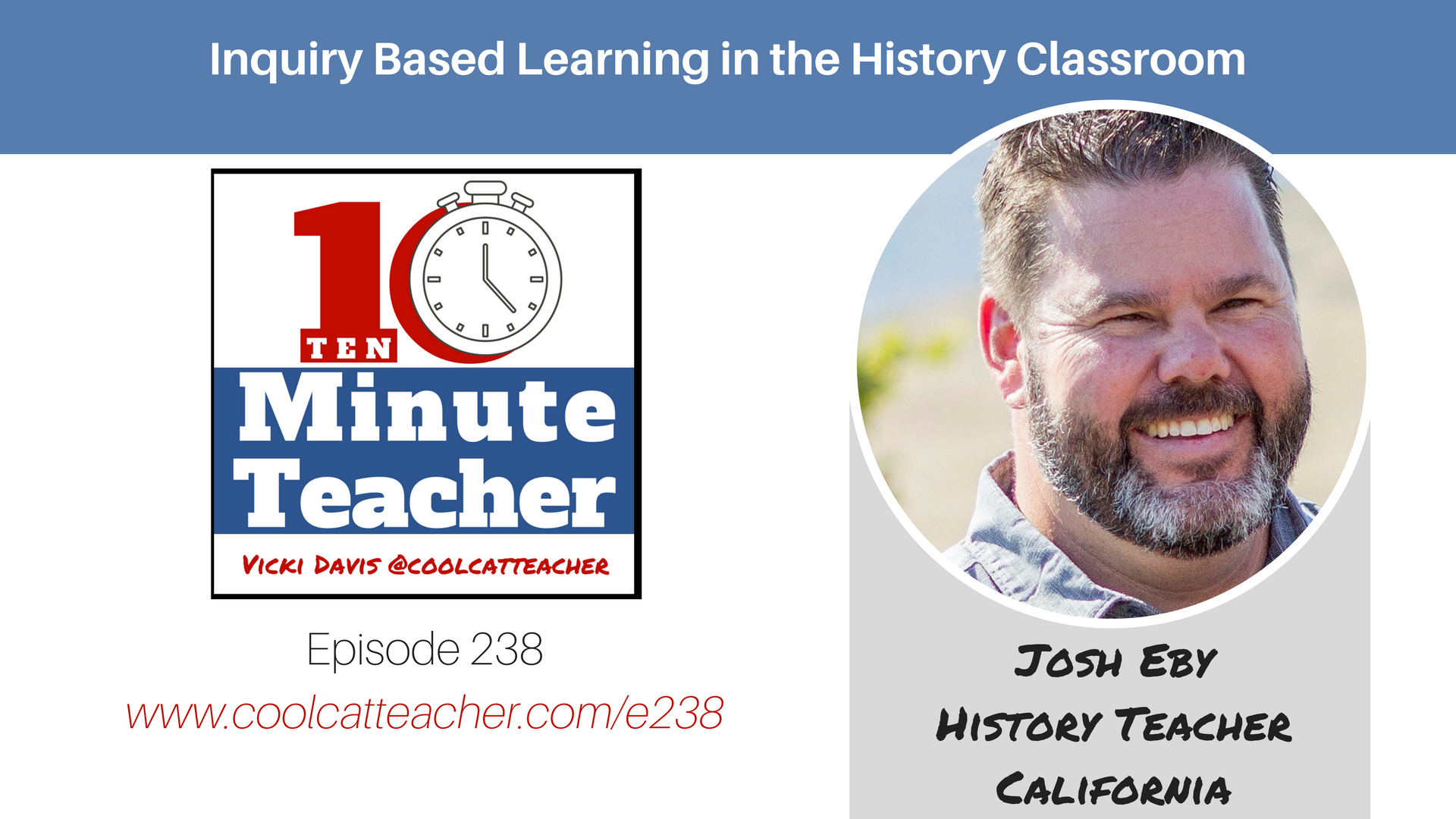 Inquiry-Based Learning in the History Classroom

Josh Eby shares how he uses inquiry-based learning in his history classroom. He also discusses how he’s become a better teacher after returning to the classroom after 12 years in administration and why it was one of the best decisions he’s ever made. Happy Wonderful Classroom Wednesday — teachers of all subjects will learn some ideas from this one. (Including how long we need to wait when asking a question! 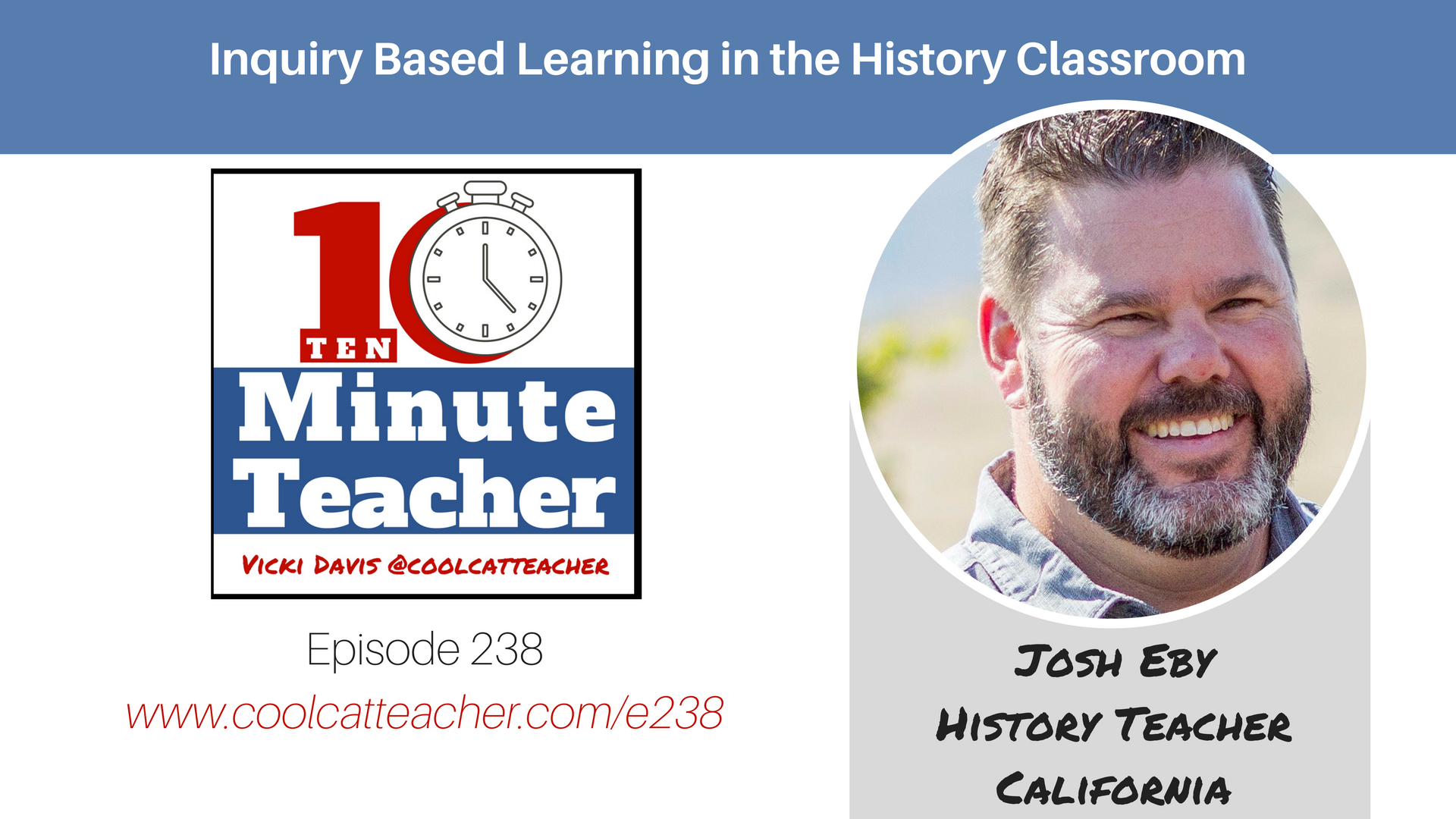 PowerSchool is my SIS and LMS and is the sponsor of today’s show. On January 31, they have a free webinar“Preparing Students for Success: Measuring What Matters” about preparing students for success and measuring what matters. Jake Cotton, a superintendent from Virginia, will be sharing.

Inquiry-Based Learning in the History Classroom

Josh: So this week we have been working on the Constitutional Convention.

What I was able to do was (assign) each of my students a different role at the convention, playing someone who was actually there. They have a background speaker card, and actually a mask and everything that shows.

We start with a “Meet and Greet” where they actually get to know each other and know who’s at the convention, the various people.

Vicki: So they have to play the role.

So they are given, again, a background card for each person that was at the convention. They play one of thirty-two people. If I have more than 32 students, I have to invent some other roles for them. (laughs)

Josh: So they have kind of their personal background in each card — their views on different topics they get. And then they have “points of contention” that they need to raise throughout the convention.

Vicki: How do you make sure that everyone gets a chance to speak?

Josh: That’s through the idea of giving their points to raise. So at some point we just do a piece where it’s almost a Socratic piece, where everyone says their role. Everyone says their viewpoint on at least one topic. So I monitor that, as the teacher, and we make sure that throughout the three to four days that we of that, all 30+ students get an opportunity to speak.

Vicki: What do the students think about this?

How Students Give Feedback to the Process

Actually, tomorrow we’re doing a Google form in which they are going to evaluate their place at it.

Just off of my viewpoint, they just seem so much more excited to come into the classroom each day. Not only are they playing the roles, but I re-create and make the classroom to look different. So they’re sitting by state each day. They have to pick up their card. They pick up their mask.

I saw some students that weren’t normally participating as much — getting involved in discussing.

Looking at some formative assessments I’ve done thus far, they definitely are getting the material and the curriculum in a more advanced level than they would be, say through direct instruction or note taking or reading strategies.

Vicki: Josh, are you always this “hands on”?

Why Josh Gets Students Involved in Hands On History

As oftentimes as we can. I just feel that when students get to LIVE the history and be a part of it, they definitely benefit more. I think changing into looking at inquiry-based styles, there is also that place for role-play as well within that.

I think that at least my students aren’t as shy in many times as we do that. They get a little more involved. Part of it is using those masks that we have. It’s just nice because they get to hide a little bit, too, if they’re not as comfortable being out front.

So, if you look at your whole school year, what is the greatest “knock it out of the park” activity you do with your students in history class?

A Lewis and Clark Experience

One of the things we do — and for me, it’s more something that I love as a teacher — is when we study Lewis and Clark, again they take the role of someone on the travels. They write a journal as if they were either Lewis or Clark or someone else as a part of the expedition.

I think, for me, the value in it is not just the learning about what happened on their travels, but the exploration of America.

I travel all across our country in the summer. I RV with my family, and getting my own students to just see the expansiveness of our nation, and the diversity that we have… I think it comes out in those journals. Along with the writing and just getting to see how they think, as well, and kind of their own reflective process.

Vicki: So are you in a different place each day when they’re journaling, to kind of introduce it, or do they study this on their own?

Josh: It’s a little bit of both. Sometimes they read on their own and kind of gather where Lewis and Clark are. Then we have a map that we follow through their travels all the way to Oregon.

What Mistakes Has Josh Made in Inquiry Based Learning?

Vicki: Have you ever made a mistake with this inquiry-based learning approach?

Josh: Oh gosh! All the time!

I would say the biggest mistake that I’ve realized is (that) sometimes letting the kids go before they have solid background foundation.

Even what we’re studying now, in California, they’re supposed to have studied the Constitutional Convention in 5th grade. It’s a large part of our 5th grade social studies curriculum. So i’ve made some “jumps” for them, thinking that they have that foundation.

And they struggled early on. So, again, scaffolding their reading and their background information — for me — helps lay that groundwork so they can really get to the inquiry and the higher order thinking skills we’re looking for.

Vicki: How long has it taken you to get to this approach? Do you ever look back on how you started teaching at first, and how you’ve grown?

Josh: Yes. I think the amount of direct instruction that I used to give in my early years is almost negligible, compared to what we do now.

I think part of it is for me having my own grasp of the material as well, and the curriculum as well, and feeling comfortable with that, knowing that I can change and adjust on the fly as we go.

Josh Moved from Administration Back into the Classroom

And then, previously, I actually spent 12 years as an administrator before the classroom. Again this year, I went back to teaching this year. I think sitting on the other side of the room has really helped me see that kids can inquire. What are different strategies we can use to get that done?

Vicki: Are you glad to be back?

Josh: I love it! Yes. It is amazing. Best decision I’ve made.

Vicki: To come back from administration to the classroom… You don’t see that happen very often, do you?

Josh: No. No. I think I’m one of the few. I only know of two others, and they were at the very end of their careers, actually, and I think that they wanted to finish their last couple of years in the classroom again.

I enjoyed my time in administration, but I really really missed working with the students each day. And I’ve seen that benefit again. It really has re-infused my passion for education and my passion for teaching.

What About Being An Administrator Has Made You a Better Teacher

Vicki: Is there anything you learned as an administrator that’s made you a better teacher?

Josh: Yes! One thing I saw as an administrator, sitting on the other side and observing classrooms, is the importance of “wait time”…

I don’t think, as a teacher, I saw this.

Because you know, I’d ask teachers, “How long do you think you just waited?” And they would give me anything from say, a minute to a minute-and-a-half. And I’d be like, “It was only 20 seconds.”

Really getting to value that now, knowing that sitting back and giving kids time to process leads itself to better thinking for them and better responses as well.

Slowing Down When Asking Questions

Vicki: So when you ask a question now, you are in less of a rush than you were before you were an administrator?

Josh: Absolutely. And I think a lot of that is just (laughs) age, as well? Just time?

I started teaching at 22 years old. I think everything went fast.

Josh: But I think again, being an administrator and realizing how sometimes teachers were… I saw that teachers were rushing… and didn't realize they were.

Having that mindset now to know, “I can get to what I need to get to, even if I just wait a little longer for kids to process the question that they’ve asked.”

Or… even a project we’re doing, or an activity we’re doing. Just wait. Let them have time before we start getting to work, so they really know what they have to do.

Vicki: So much great advice here we’ve gotten from Josh about being a remarkable teacher.

This one issue of wait time? You know, that really hits home to me. Sometimes I think I don’t wait long enough.

So many wonderful ideas here.

Let’s get kids up. Let’s get them moving.

And off of this idea of having masks for role-playing — so marvelous! I think it can really do some things in the classroom.

I hope you’ll take this and apply this to your classroom, whether it’s history or any subject! 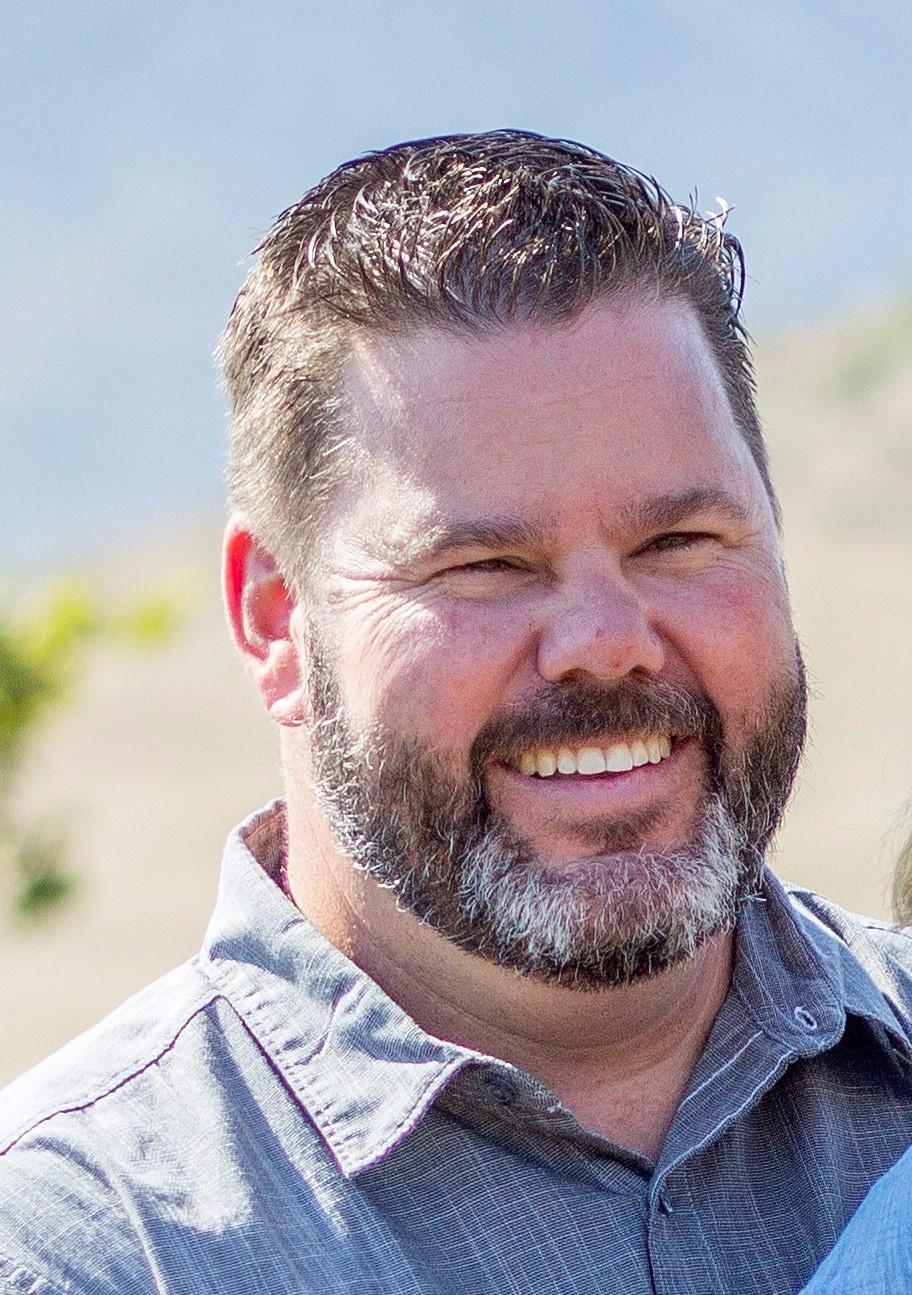 Josh Eby currently teaches 7th and 8th grade Social Science at Redwood MS is Thousand Oaks, CA. For the previous five years, Josh was the Principal at Newbury Park HS and Sycamore Canyon School. This year he returned to his true passion: Teaching.