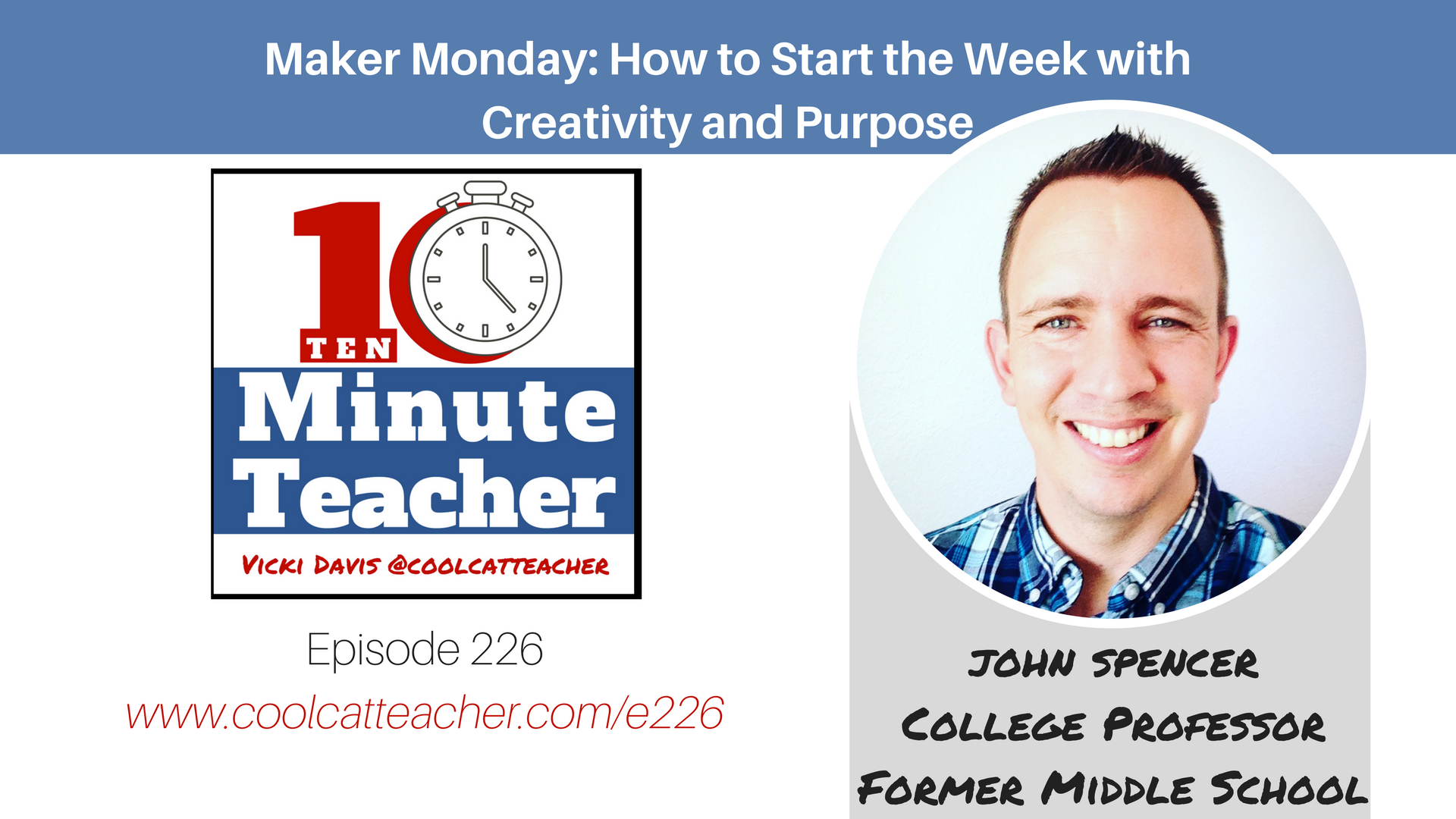 Maker Monday: Start the Week with Creativity and Purpose

Go to https://www.coolcatteacher.com/firelab today to get your Free Fire Forensics Kit.

Maker Monday: Start the Week with Creativity and Purpose

Vicki: Today we have with us John Spencer @spencerideas, coauthor of two different best-selling books, Launch and the other one is Empower, that he co-authored with my friend A.J. Juliani, who is also an awesome person.

Today, we’re going to talk about “Making on Monday,” and getting creative.

So, John, you have an idea of something you used to do when you were in middle school. 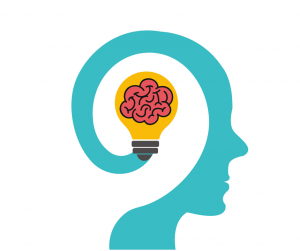 What is Maker Monday?

John: So, this actually began when I taught self-contained. So I was teaching all subjects. I had kids for a full day. Mondays were the hardest, because teaching is an exhausting thing.

I’d always kind of wait until Friday to do like a Fun Friday Maker Activity.

And I realized, “Wait a second! We could start the week with Making!”

So we would do Maker Mondays, and there were all kinds of different options that we did.

Sometimes they were kind of rapid prototyping and making things with cardboard and duct tape.

Sometimes they were digital products that they made.

But we would always start every single Monday morning of with a Maker Monday.

Vicki: Now, a lot of people wait until Friday because they kind of feel like, “OK, Monday, I gotta get ahead on my content.”

What’s your thought on that?

John: Well, my first thought is, you know, getting the buy-in from students on Monday is really important. So, setting the tone for the entire week.

And a lot of teachers will do something like, “Talk about your weekend,” and those types of things. And that’s OK, but you know, I had a lot of students who — to be honest — had faced trauma over the weekend, or things weren’t necessarily great for them on the weekend.

So, starting with doing something creative and honoring sort of that student agency and creative impulse in the students really… I felt like it sort of “centered” them a little bit, in the beginning.

And then the other thing that I would say is, you know, all of our Maker Projects were aligned to the standards. So we were trying things back into information literacy, and informational texts, and digital composition, and the different ISTE Standards, like connected to kind of design. And so these were always tied back to the standards.

It wasn’t, you know, a break from the standards. But the idea was that, starting a Monday morning off with that, you kind of set the tone for the whole week that says, you know, “We’re going to think creatively in this class.”

How much structure do you need for Maker Mondays?

Vicki: So… one of your books, Empower, is really about empowering kids. I like this approach because you’re really letting kids start of by creating. So instead of, you know, talking about your weekend, it’s about, “Let’s make something together.”

I mean, did you prescribe what they had to make, or did you just give them lots of options of things to make and let them choose?

John: You know, it really depended upon the week.

One week — and this is part of the fun, and they didn’t know what to expect — they would come in, and there would be a box of items. We would do a sort of a divergent thinking challenge to come up with as many different uses of these items. The after that, they would have to build it.

So it was at that point, pretty prescribed. I mean, it’s pretty tight, and they have to work within that creative constraint.

And then another time, they would kind of do a mini design thinking project, where they worked through the entire cycle, and I would tie it into whatever we were doing for reading. So instead of working for 45 minutes, that might be 90 minutes.

And then there were times when we did Maker Stations, where I’d kind of set up things in the classroom in different areas. They would come in, and they knew that they could work on whatever they wanted to work on. So you might have students who — what they really wanted to do was digital storytelling and blogging and podcasting. And then there were other students who wanted to do, say, circuitry, or like I said, Cardboard Challenges, or working on their Scratch games.

And so, you know, it really depended on the week.

I felt like sometimes, having them all do the same thing built community, and that was really important.

But then it was also really important to have those weeks where they had kind of free reign to choose what they wanted to do, and it was more about honoring their individual student agency.

How do you pitch Maker Mondays to administrators?

Vicki: So let’s pretend that you are pitching this to administration. And I know you ended up in administration, so I’m sure you had teachers pitch ideas to you sometimes.

Vicki: But you know, why on earth, John, is this still so new? I mean that’s my first thing. It’s why are people still having to pitch this? (laughs)

Vicki: But they are.

Vicki: So if you could, you know, coach a teacher on how to pitch this to their administrator, what would be your elevator pitch if you were that teacher?

John: Yeah, so and I would just say real quickly, I was never a formal… like I was never a principal or AP. I did get the chance to be a Tech Coach and work kind of on that level, and now I’m at the university.

And so, I kind of came in and pitched it from a few different directions. It really depended upon the principal that I had.

One was, you know, “We need kids to be innovators. We need them to be problem solvers.” I would begin the conversation by saying, “What do we want students to be?

And you know, inevitable, they would say, “Well, they need to be problem solvers, critical thinkers, all of that kind of stuff.”

Well, this is a chance to begin the week with that.

And then other times, it was more about the chance to talk about how it will prepare them for the creative economy. And I would say, “Look, you know, Design Thinking and Rapid Prototyping and Iterative Thinking and Divergent Thinking — these things are all vital for the future and the kind of jobs that kids are going to have when they’re older.”

And then other times, it was a chance to kind of “prove” that this was a hands-on way to make connections to the standards they were learning already.

And so, it was a chance to show, for example, that when they were doing the Tiny House Project. (And that started as a Maker Monday Activity, and we actually kind of did it three different days. But they had to design a Tiny House.

And I was able to demonstrate how that was applied mathematics connected to proportional reasoning, volume, surface area, etc. And once our test scores came in, and they were, you know, near the top if not at the top in the district, then I felt like I had that “permission” to be able to do that.

I do want to point out that it felt risky to the principal. And it felt risky for me, and that’s one of the hard things about being a teacher, is that we do have to take those creative risks. Risk-taking is always going to feel a little bit scary!

Vicki: It sure does! I just think that it’s fascinating that you can think about starting the week with creativity and purpose. It just makes a lot of sense.

John: Yeah, and it’s one of those things… you know, now working with pre-service teachers at the university level, it’s so fun to share this idea with them.

The big thing that they’ll say is, “Ooh, I’m only a student teacher. I don’t know if my teacher will let me.”

The same fears crop up. Will the kids be poorly behaved? And you know, they’re surprised that student engagement is actually really high, and the behavior problems are less of an issue on Monday morning (which tends to be kind of a tough time for classroom management).

So that’s been kind of the fun thing now, is to watch some of these preservice teachers, ranging from second grade teachers up to high school, doing this on their own in their classrooms — and honestly, watching them implement it in a way that’s even better than what I did, has been kind of fun.

Vicki: So, remarkable educators, we have a new thought for us. Maker Monday.

So it’s Monday! Why don’t you get out there and “Make” and try this concept in your school.

Use this podcast as something to share with your administrator to help them catch the vision for what this can do for your school!

John Spencer is a former middle school teacher and current college professor on a quest to transform schools into bastions of creativity and wonder. He is the co-author of the Amazon-bestselling books Launch and Empower. 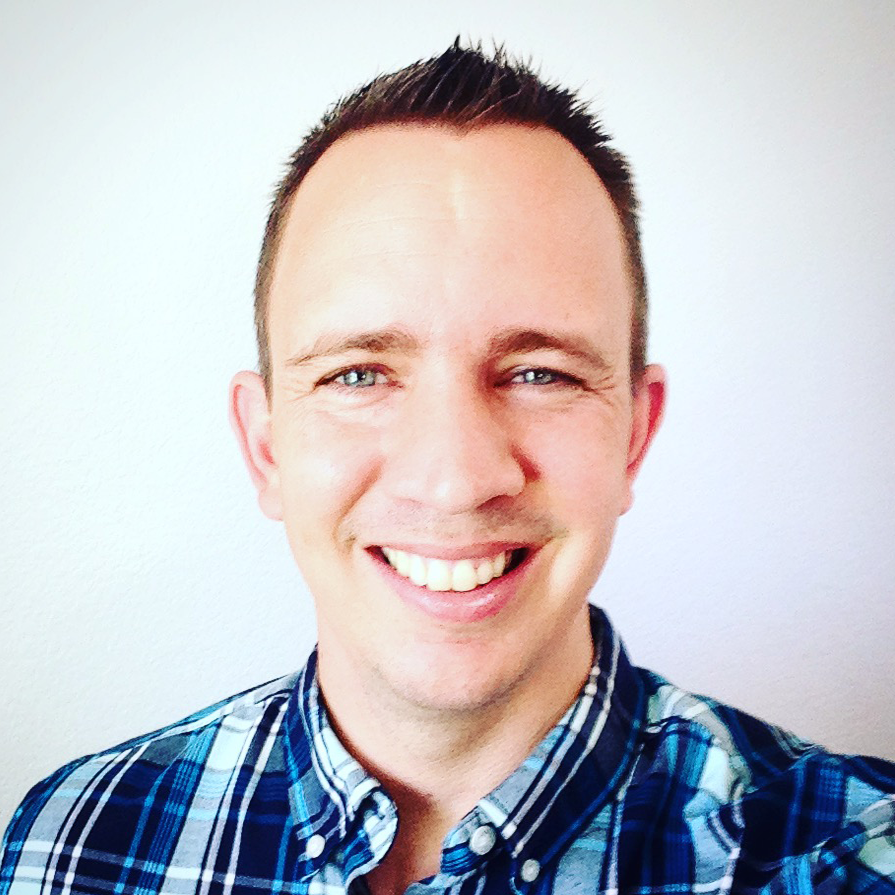 All Posts »
PrevPreviousWhy Do You Run? Understanding Your Motivation
NextA Secret of Finding Joy In Life: What You Count — CountsNext