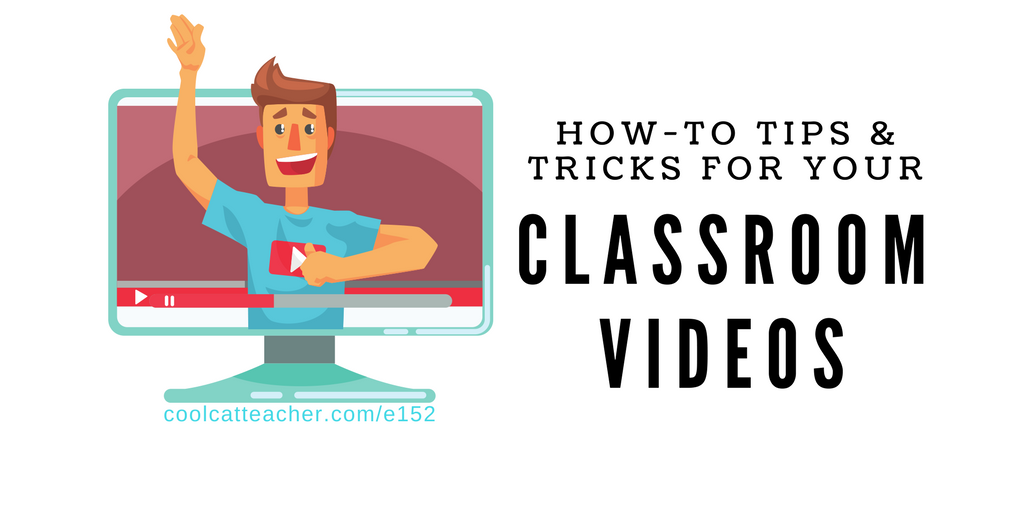 Videos are the modern essay. If you can’t create them, you can’t start a movement, can’t sell a product, or promote an idea. Of all the things I teach, helping kids tell digital stories through video is probably one of the most important. Today’s guest is a perfect guide for those of us who want to make videos with students. Simply put, Tim Betts rocks YouTube history. As a certified YouTube educational channel, he’s one of those that history teachers will love! But he also teaches us how to do this with students. 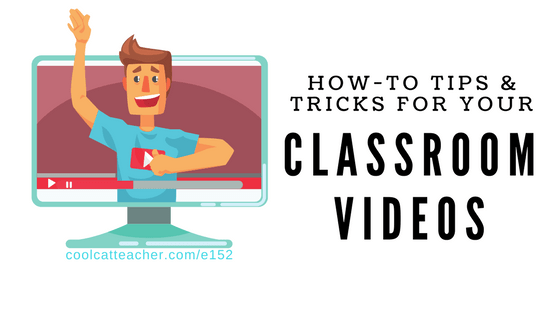 Today’s episode is sponsored by JAM.com, the perfect last minute holiday gift for your kids or grandkids. The creative courses at Jam.com are project-based, creative and FUN. Use the code COOLCAT50 to get $50 off your course. And remember that you can sign up for a 14 day FREE trial of any course with your child aged 7-16. Drawing. Minecraft. Legos. And more!

You know, Timothy Betts @MrBettsClass is in the classroom, but he has more than 200 videos for American History.

Tim: Hello! Thank you for having me on the show!

How do we make amazing videos?

Vicki: Cool! So how do we start with making a really cool video?

Tim: I think you start – with making a really cool video – you start the same way that you would start any lesson. You really have to look at your objectives. What are you trying to teach your students? Just like anything else you would do.

And then, that’s when it starts getting technical. I specialize in historical parodies, songs, and other comedic videos – because I’m a full proponent of tricking kids into learning.

When they don’t know that they’re actually learning, they actually lean significantly better. So I try to figure out what’s interesting.

Vicki: Describe for us one of your most popular videos, and what you think makes it great.

Tim: I think one of my most popular videos is my Roanoke video done to Frozen’s “Let It Go.” Mainly because I went all out on that. I got rid of all inhibitions. I went to multiple locations. I’m in the middle of the forest part of Central Park, just running around, acting as if I’m trying to find this lost colony of Roanoke. I was asking strangers to be my cameraman.

Tim: Oh yeah! I ran into these two German tourists. They barely spoke any English, but I was able to convince then that I wasn’t a murderer.

Tim: Even though when we were in the woods, and they ended up being my camera men and following me around. But I think what really speaks to the kids is:

A) It’s from Frozen. That’s something that they can really latch onto.

B) It’s really interesting content, because it’s… like… the first great American history mystery. What happened to the colonists at Roanoke? And then…

C) I put everything into it. I didn’t worry about looking silly. I just said, “You know what? Let me just dive into the character.”

And I think that really comes across, and it speaks to the kids. And it also makes your classroom a safer classroom for the kids to do the same thing as well – to take those academic risks and to really make bonds with the curriculum.

Vicki: OK, so what about those who are sitting here thinking, “OK, you used the tune from Frozen. What about copyright?”

I started it because as a teacher… I started it about 4-5 years ago, when YouTube wasn’t in its infancy, but it was in its adolescence. It was still trying to shake off that whole idea of being nothing but cat videos.

I wasn’t able to find all of the educational content that I wanted. So… I just made it.

So… if the original copyright holder wants to take any AdSense I make – which is next to nothing anyway – go for it!

The main intention of the video is educating not just my students, but all students that have access to it.

Vicki: Yeah. And you know, that’s one thing a lot of educators don’t understand. YouTube kind of has a way to say, “OK. We’ll let you use it,” or you have to get some ad revenue. It’s one reason to actually just turn on AdSense, even if you don’t use it. I have AdSense turned on, on my account, but it’s just really there for that particular reason – of using the music and letting it handle it for you.

How do you start students with video?

OK, so let’s say, Tim, that you were going to make a parody video or a historical video with your students. What are some of the things that you would do with them?

Then, if they’re doing a historical parody song – which some of my students do – we actually have an American Speaks Pageant in which they incorporate music into it as well.

Then they would start looking around. A lot of people ask, “What comes first – the song, the lyrics?” And, you know what? It changes every single time. It’s just… whatever feels right happens.

Sometimes a catchy chorus, your mind just flips those words in. And then sometimes, you have everything you want to say, and then you’re looking around.

Actually, one of the things I do, about twice a month, is I just go on YouTube. I look at what are the 20 most popular songs of the month. I know that’s going to be more accessible to the kids — if I can make my content into their songs.

But then, with that, I put them in a right direction – rhymezone.com

Tim: Rhymezone – it is the best! Yeah, when you’ve kind of painted yourself into a corner…

Tim: … And you’re like, “What rhymes with ‘patriot’? Oh no!” And then you go there, and actually it’s a good English lesson as well because you learn about the true rhymes. And you learn about slant rhymes.

Just being able to use language, and how you use it, it really incorporates a lot of English language skills that you wouldn’t normally put in here.

And also, kids have such access to technology. I am so jealous of my students! Like refrigerators have cameras in them now! I remember being a kid, and I wasn’t allowed to touch like the giant camcorder, which was basically a VCR that you put on your shoulder.

And now they’re constantly walking around with cameras!

The success he feels from making videos

Tim: So, just letting them know that they can do this. This is really accessible!

And the most successful projects I like to do with my 7th graders with American History every year is to just shoe them the basic green screen function in their iMovie – which comes standard with every single Mac.

I have them do a historical blog, where they have to look up a topic, create a character, and then just speak and make a video as if they’re that character, talking about whatever they’ve been assigned to talk about.

And it’s really, really cool. Because not only do they get into character – I do it relatively early in the year – and then I start seeing them do that in other classes throughout the year.

And they’re going, “Mr. Betts, do you have any more of that green paper that we can use? We have a science project coming up… or an English project.”

Vicki: So real quick… Give us a rundown of your equipment. It sounds like you have Macs, and you use iMovie. What other equipment do you use in the process of making your movies?

Tim: Yeah, my students have those. Don’t tell anyone, but I’m more of a Windows-based guy.

Tim: Yeah. I use the Adobe Suite throughout. I use Premiere Pro for my video editing. I use Audition for any audio editing. When I’m making thumbnails or different images, I’ll use Photoshop.

But it doesn’t matter! Equipment does not matter. Whether you get a PC or whether you get a Mac, there’s Windows MovieMaker or there’s iMovie. There is so much free software out there to allow you to make these kinds of creations.

Another thing — the first one you make is going to be horrible!

Tim: Let it be horrible. Nobody starts off good. If you start off only slightly cringy, you’re miles ahead of where I started.

Tim: But, you know, I think it’s important to us as teachers that we go out and take risks, and teach ourselves new skills, so we’re growing as well. It gets really monotonous, sometimes teaching the same subject matter over and over again.

You kind of fall into a repetition. You should be looking back on your lessons, to go, “This lesson in this unit? I want to do a total overhaul on this one, throw a whole bunch of resources into there, and allow myself to grow as a professional. Let me try something new.”

Why you should consider making videos in class

Vicki: OK. Tim, as we finish up… You have 20 seconds to give us a pep talk about why we should consider making videos in our class.

Tim: You should be making videos in your class because your kids are addicted to videos. That’s the way that they learned. Especially if you’re in a history class, but any class that has any kind of story. We love stories. We spend billions and billions of dollars a year watching stories, reading stories, listening to stories. These are the tools that will allow your kids to make these stories and show that they really understand what you’re teaching them.

Vicki: OK, teachers. Get out there and let descend upon YouTube. I have a YouTube channel. Do you?

Tim: Yes I do! It’s www.youtube.com/mrbettsclass

MrBettsClass musical parodies and comic videos have been used in classrooms around the world. With nearly 200 videos focused mainly on American history topics, MrBettsClass has helped teachers, students, and other learners laugh and learn over 3.5 million times. Betts is preparing to do it all over again by launching a brand new school year of content on August 24th, publishing new content every Thursday until the school year's end. 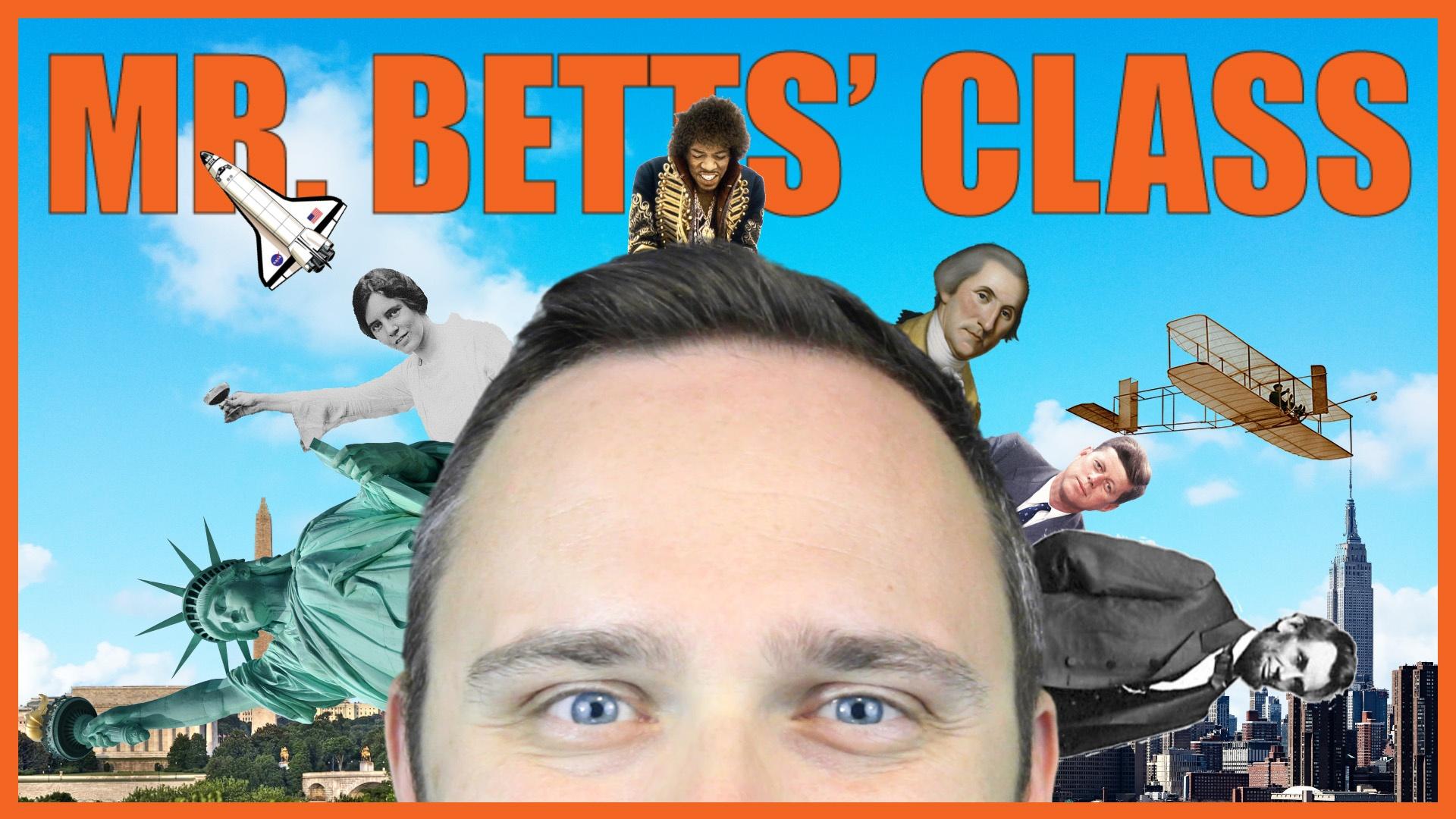