Sarah Beeghley @the_geeky_girl has been called by a US Senator to tell her story as part of anti-bullying legislation. Hear her story or triumph and advice to teachers.

Today’s Sponsor: GradeCam lets you create assessments with formats including multiple choice, true/false, number grids, rubrics, and even handwritten numeric answers that can be read and scored by Aita – Gradecam's Artificial Intelligence Teaching Assistant.Score assessments, generate reports, and transfer grades automatically. Work smarter instead of harder. Sign up for your 60-day free trial at gradecam.com/coolcatteacher

Cathy Rubin in her Global Search for Education has posed these questions in my inbox for this month’s global search for education column:  How do we help instill a sense of global citizenship, of civic-mindedness, and respect on the internet? What are some of the best strategies you have seen in practice in your school communities?

As a result, I've recorded this episode and one last week from Anne Collier to help bring this issue to the forefront.

Vicki: Today we are talking to Sarah Beeghley about her battle against cyberbullying. And I do have to give a shout out to my good friend, Jim Beeghley, who works with my website and does so many amazing things to help the Cool Cat Teacher blog behind the scenes. But Sarah, I’ve interviewed you before, and we’ll certainly link to that. But tell us your most recent news about your work with Senator Casey.

Sarah: So, Senator Casey of Pennsylvania, is proposing an anti-bullying law. And I found out on Facebook actually, so I gave his office a call, saying like I’m supporting him, I’ve been bullied and cyber bullied before. And I get a call, last Monday saying that they want to use my stories and possibly use them for going to Congress and just all over Facebook and all over the internet.

Vicki: So, if you got called to Congress today, what would be the first story, if you only had one story to tell.

Sarah: If I could only tell one story, it would definitely be the story of when I was bullied and cyberbullied in middle school. This girl who I thought was my best friend, started calling me names behind my back. And next thing I know, it’s going online. And thankfully my parents got on my emails at that point, but she had posted a quiz. And this quiz had questions that were mainly directed towards me and all of them were really offensive and hurtful towards me and my integrity. And we had talked to the parents, and the parents didn’t really do anything. And then, we got the school involved because it didn’t stop, it continued. Name-calling online and name-calling when we were at school too. And she got three days of in school suspension and then she had to sit out for the basketball playoffs. That’s about her punishment.

We are Survivors, not Victims

Vicki: You know, it’s tough, and I know from being picked on. There were times, you know we didn’t really take about bullying back when I was in..that age. But it was very hurtful. There were times people would say things like,” You bring this on yourself. This is your fault.” Don’t you feel like that is still the case, sometimes people blame the person who is being bullied?

Sarah: I definitely feel as though that happens, but especially online. Because of what people post online, but it doesn’t always have to fall back on them, on the victim. It is the people who are bullying the victim that are the ones who are kind of putting it on the victim because they’re figuring out the worst.

Vicki: And I have a word that I would love for you to start using so…back when we had three tornados hit Camilla my hometown. And we were really struggling, and there were so many people impacted. We used the word tornado victims. And one of the people came in the psychologist and said,” Stop calling them victims. They’re tornado survivors.” Because that is…I think of empowerment. I’m not a victim. You’re not a victim. We have stood up for ourselves, and we have said this is just not something that is okay to do. Do you feel like you are a survivor or do you feel like you are still in victim mood and feel helpless?

Sarah: I definitely feel as though I am a survivor because I know how to get over situations. Different situations that don’t even involve bullying or cyberbullying, because of what I went through.

What mistakes did teachers make in Sarah’s situation?

Sarah: The biggest one was that girls will be girls, and boys will be boys. And then turn the other cheek and don’t care. I didn’t have anybody to turn to. And I’m in college now and I’m going to be a teacher. One of the biggest things I’m gonna do for my future students is I want to be there for them. Because nobody was ever there for me. Like somebody could be going through this and they just need to have someone there for them.

Vicki: But do you think punishments really help?

Sarah: I mean, the punishment that was given to the girl…like the worst part of my story…didn’t help her at all because she continued to do it. But now, at least in Pennsylvania, cyberbullying is a misdemeanor of the third degree. People can actually go to jail for it. And I read somewhere recently that the cyberbullying rates have dropped because of that law.

Vicki: This is just a hard thing. So, Sarah, I’ll interject this here. The Olweus method of dealing with bullying, which is really empowering bystanders, is really the only research-based anti bullying method that I’ve seen. I’ve kinda been through that, but even then it basically teaches you that the best thing and the only thing that works is empowering bystanders. That’s so hard Sarah, don’t you think?

Sarah: Oh, it’s so hard because I know for a fact that my friends didn’t want to stand up or say anything because they were friends with the girl. And it’s almost like the bystanders have to pick and choose, and if they pick the wrong side they’re going to be called a snitch.

Vicki: Get called a snitch or feel like they’re next.

Vicki: Being bullied is a very lonely thing. I just remember in my case, I lost all my friends, I had two and a fella in our class had a skiing party and he invited everybody but me. Those two friends went to him and said, “Oh, you need to invite Vicki” and said, “Well you can choose. You can either come to the party or be Vicki’s friend” and they chose the party. But I will tell you, I used to tell the good Lord I wouldn’t thank Him for it, but now I thank Him for it every day because it’s being used for great good. Even talking to you and understanding, you know, because Sarah, you will never forget, will you?

Vicki: So, Sarah, how do you think about the fact that you may end up in Congress about this? Does that scare you?

Sarah: It scares me a little bit, but like I’m so excited. Because somebody is actually taking initiative for it. And it’s not just the state of Pennsylvania either. It’s across the United States.

Vicki: People care. So you find that really encouraging.

Sarah: Yes. Like I’m sitting here and I’m so excited.

Vicki: Well, you know, I’ll be following you because we have a backchannel, we connect all the time. Teachers, I just want you to hear Sarah’s view because this is a view from a student whose feelings are still pretty raw in feeling all of this. There are things that are being done. Take it seriously. It’s not boys will be boys or girls will be girls. And I will just tell you this. Just know that it’s a lonely thing. We used to call it being picked on. When you’re being picked on, it’s a lonely path even if you have your parents on your side. It’s hard. I cried everyday for five years. I don’t wish that on anybody. No child deserves that. None. 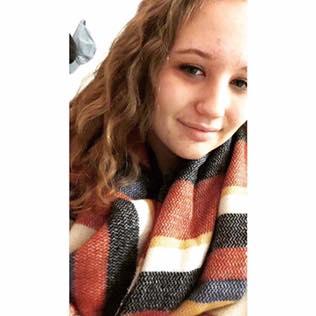 Sarah Beeghley, a college sophomore, has experienced cyberbullying her entire life. Now she is advocating for it in many different ways.

Cool! Now, check your email to confirm your subscription and to get your free kindness poster.