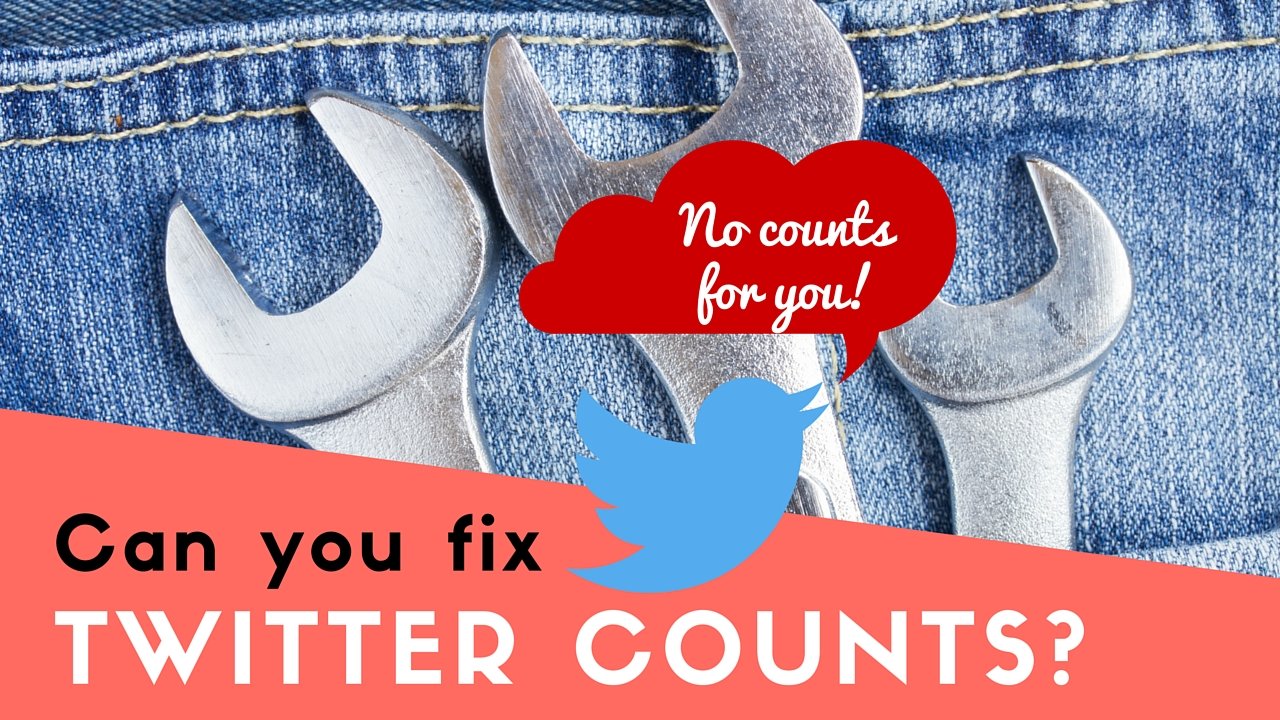 Can You Fix Twitter Counts? (and Why They Are Broken)

Home » Education Trends and Topics » Technology » Social Media » Can You Fix Twitter Counts? (and Why They Are Broken)

Although Twitter announced some time ago their plan to get rid of the counts that show how many times a page has been tweeted, they turned off the service on November 20. Now, my blog and many others across the web just show a tweet button, but no count. You're not alone. We're all in the same boat.

How Can I Find out Twitter Counts for a Page?

So, here is an alternative fix to the big price tag until things get sorted out:

You can now use this to see how many Twitter shares a page has if you want to see that. But Buzz Sumo says they won't be pulling the data live. They say most of the shares happen in the first three days, so after that, they may not update their shares quite as much (due to costs.)

You can't fix Twitter counts on blog posts, but using Buzz Sumo, you can see what they are.

Many of us have come to depend on the “social cred” of a blog post or site. When you go to a blog post and see that it has hundreds of shares, you think differently about the post than otherwise. So, why did Twitter say they wanted to “break” this.

Spam. Some blame the “bots.” Indeed, some sites have gamed the system and hired or had “bots” share and reshare their content. By removing the temptation, the use of bots will no longer help get more shares and perhaps make better content on Twitter in the long run. (Less spam.)

Money. In the end, Twitter says they have to be “sustainable.” In other words, they have to pay the bills. They claim this use was “undocumented.” We didn't make it, so we don't guarantee it, says Twitter. In the end, they have to pay for their service. They need to monetize it. But that doesn't explain why Facebook, Linked In, and Pinterest all provide the service while Twitter won't anymore.

Inaccurate. Twitter often argued that reshares were not truly a reflection of engagement. On this one point, I'll agree. Often, I share tweets on my top tweets of the week that, on the surface, do not look to be popular. Due to reshares, conversations, and clicks they are popular. But, I would argue, just because these numbers aren't an accurate reflection of engagement, doesn't mean they aren't useful.

I agree with Stuart Thomas on Memeburn that,

If Twitter’s going to thrive, as it’s shareholders need it to, then it needs to do everything in its power to keep publishers onside. Killing share counts might not see them neglecting Twitter all together, it’s too valuable for that, but it’s surely a sign that it’s not willing to compromise when it comes to their wants and desires. If this is the start of a greater trend, then Twitter may well be sowing the seeds of its own destruction.

When you break trust with your user base, you'd better watch out. I will admit that Google's continue discontinuation and finally their cancelling of Google Reader caused me to swap to Wordpress for my blog. Sure, Google has a right to make money and so does Twitter.

Services always COST SOMETHING. But not giving us the option to pay a reasonable fee and cancelling the service is short-sighted.

But one has to be very careful when upsetting the 1%. Klossner's 90-9-1 principle shows that 1% of users on social media create most of the content. Nine percent are “active lurkers” with 90% “passive lurkers.

The bottom line is that Facebook, Pinterest, and other platforms provide this data. Since Twitter does not, it may cause many of us to gravitate towards sharing on other social media. I'm not sure that it will be intentional. And face it, the $300-500 price tag is not an option that many average users are going to be willing to accept.

Certainly, a whole slew of Twitter spammers are crying in their soup today, and I guess that is a good thing.

Meanwhile, I'll use Buzz Sumo and make up my mind about what I think. There's no fix, just one Chrome extension or deep deep pockets that can fix your Twitter share button.

We are yet again reminded that “free” has a price. And, for better or worse, the change will leave lots of annoyed birds out there.