With this post, I’m learning about markdown language and teaching you at the same time. I am a beginner at using markdown. I’ve found that the blog posts I write when I’m a beginner are more helpful to other beginners because there are things that more advanced people forget. This is going to be true because markdown requires spacing rules that I will forget once I’m an expert and they become second nature.

Markdown is a simple way to format. When the Internet began, some of us geekier types wrote in html or the language of the web. This was hard because if you forgot one bracket, your code wouldn’t show or it would mess everything up. Markdown is forgiving and pretty simple if you play with it.

Now that the web is maturing and many are moving to tablet devices, we’ve realized that it really is more efficient to keep your hands on the keyboard. It is funny that we moved from the keyboard to the mouse because it was easier to use the mouse. Then we moved from the mouse to touching the screen because it was easier. Now, we’ve found that for some things – particularly text-rich activities like typing this post – keeping your hand on the keyboard really makes sense.

Don’t get stressed. If you want to be more productive and you use Evernote or Blog or you write anything, you might want to use this. If you’re not there yet, just be aware that Markdown language exists and know that it is just a special way of formatting.

What apps use markdown?

I’m using Byword. It is an app that lets you type without any toolbars or headers. I use it on my ipad. I use the markdown language to type adding the symbols as needed. If you pay for the premium version then you can post directly to Evernote , Dropbox, Blogger, or Tumblr.
There are other apps that use markdown. It is writing for smart people… you don’t have to be geek, just able to learn a few keys.

How do I use Markdown?

I intentially waited to post this blog for a week to make sure it is something I use. I do use it. In fact, I'm using it daily to take notes (see the notes above from some student brainstorming we did this week) to draft emails, and to draft blog posts. All of the blog posts from this past week were drafted in Byword.

What are the markdown tags?

If you you use an app that uses markdown and type:

When you look at the final document it will look like this:

If you want a bulleted list, then all you have to do is use one asterisk starting the line:

* One bullet
* Another bullet

Numbered lists are very simple, just press enter and type a number and a period.

Now, you can do hyperlinks 2 ways. An easy way and a way for people who really are geeks.

Tips for the Basic Hyperlink for beginners:

Let’s say that you are going to do a blog post or something longer with many hyperlinks. This is for advanced users but it works. If you’re a beginner, SKIP this section! Trust me.
So, if you have a hyperlink that you’re going to use and reuse, let’s say a Twitter handle or two. Here’s how you can do that.

Any time you want to use that link just put the letter in brackets behind it.

What if I want to link to an image?

This is a bit tricky because the image should already be up on the web. I would hold off on this unless you’re advanced. If you are, instead of a hyperlink, you paste the link to the image second. Remember, if you want a repeating image, it will work the same way as above.
So, I’ll do a simple image like this (sorry the link is so long). I found an image I wanted to show and copied the image link. You get there on an ipad by opening the image in a new tab by itself. Usually it ends in .jpg called a “j-peg.” !

[Inspirational Quote](http://2.bp.blogspot.com/-pkv9jQu4lYc/UG7nmX3jFBI/AAAAAAAAVCM/EsHeLeaPMEE/s1600/greatness-of-a-teacher.jpg "Quote from an image I'm using to demo") 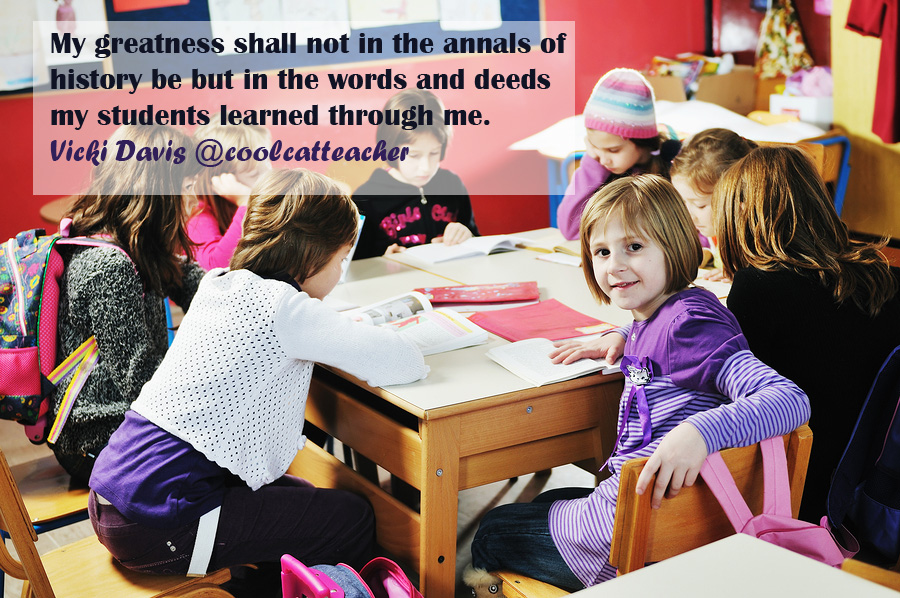 You can quote people just by using the right pointing caret (just above the period.) >"Innovate or depreciate" Vicki Davis looks like

When do we use blockquotes?

We use blockquotes when we are quoting another source. This is good netiquette and more ethical than not using them. It is just something that developed as bloggers wrote.

Can we combine this with what we’ve already learned?

Yes! You can mix these things together. So.

I’ve been showing you the code I’m typing by using the ‘backtick’. located to the left of the 1. I can’t show the backtick because this is the one thing that won’t show this way. But you can see it in the screenshots above.

When you have 2 or more spaces at the end of the line and press enter it makes a manual break. A manual break means one line in front of the other.

Tips for manual breaksIf you want a full line in between, make sure that you press enter twice.
I used the Markdown syntax guide from github to test and make this work.

So, how will someone use this?

Again, if you are already writing a lot – including blog posts, Evernote notes, books, and more… this can save you time.

Any time your hand leaves the keyboard to do something whether it is swipe or click a mouse, you slow yourself down. When time is money and you’re working to draft or keep your wordcount up, typing in an app like Byword and using markdown can save you time.

Do I recommend markdown?

I’m still learning markdown and will share how I keep using it. As with all productivity tips, time will tell. However, many productivity gurus I trust are using this type of app and for me, that means it is time to take a try.

For now, after about a week of learning it, I'm using it more than three times daily, at least. Emails that are longer than a few sentences and longer notes for Evernote, I'm typing them in Byword first. It syncs to Dropbox as well. It is a bit interesting if you forget to export it and want to do that on Windows 8, but I've found an app that will do it there as well.

Just remember, it is just a fast way to format and type designed for writers who are willing to try something new. If it freaks you out, don't do it.

I’ll experiment with markdown for taking Evernote notes and for writing. I’ll let you know what I think. Right now I’m syncing with Dropbox for this blog post and I’ll generate the HTML and paste it into Blogger.

If I like it, I’ll pay the $4.99 for the premium version of Byword so I can publish to Blogger, Tumblr, and Evernote. (I did this after a day – it is worth it. I do admit that I do not like to publish straight to blogger because it won't let me do a draft – I export the HTML and copy it into Blogger and add pictures, etc.)

How are you using markdown?

I would love to hear from those of you who’ve beat me to this trend and are already using it.
Do you mind leaving your thoughts in the comments or sharing links to blog posts you’ve written about why you like (or don’t like) markdown?

As always, thank you for helping disseminate best practices. We all become more productive when we learn and share together!

This is a tad geeky for some but sometimes the most useful things are. Enjoy and, as always, please help others by leaving comments below or a link to your own blog post to help others learn about this handy method of writing.