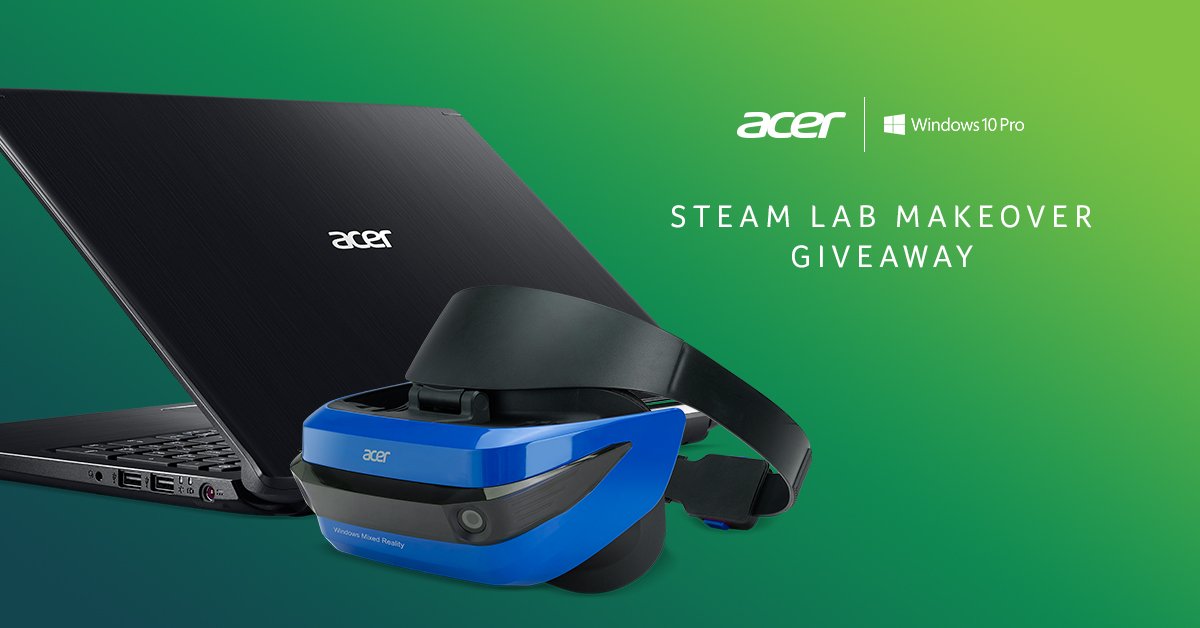 In this blog post, I'll share my experience, tell you how you can enter to win your own headsets and STEAM lab makeover, and give my predictions for the future of virtual reality. 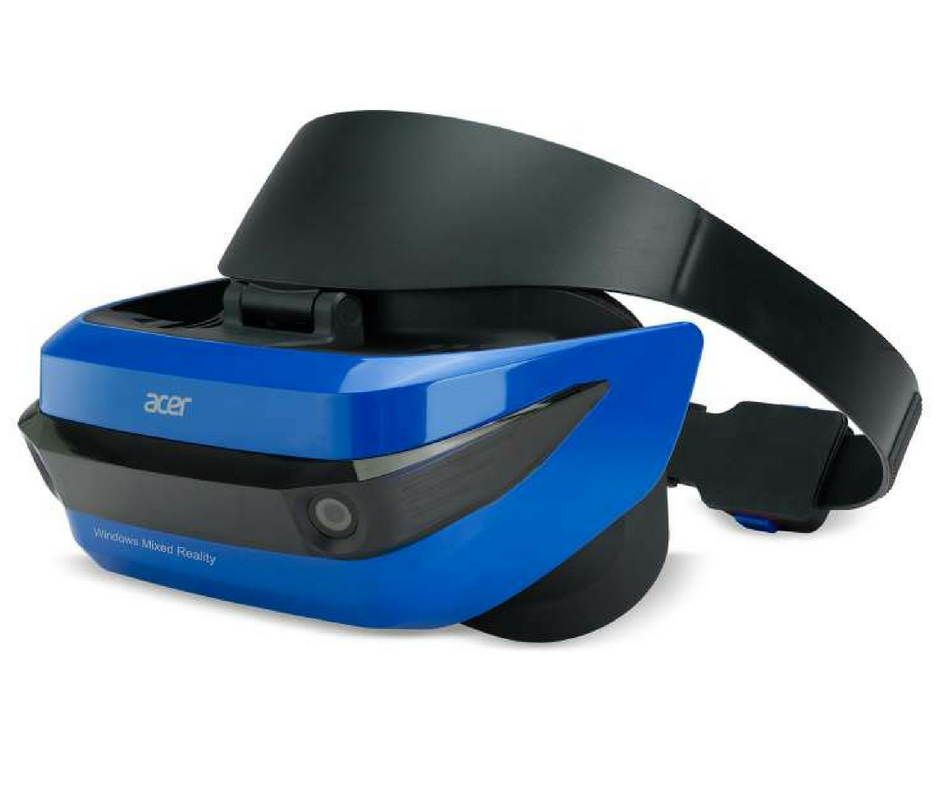 Seeing the World in VR

There are those who want you to think that virtual reality will be everything. And while some espouse a Ready Player One-type of environment, I do not. However, I do believe mixed reality gives us one of the most fantastic tools to help students understand the real world using VR technology.

I don't think a cartoon environment like in Second Life is going to excite everyone. As you can see in the video below from my VR China trip, it really looks like I shot the video in China. I was surrounded 360 degrees by the actual China. Being surrounded by reality will get people excited, especially us educators who want to help our students see the world.

Acer Education is partnering with Microsoft Education to run a STEAM lab makeover giveaway. The contest promotes immersive technology and illustrates how impactful mixed reality can be in a classroom setting.

To enter, participants must tweet @AcerEducation, tagging #AcerGivesBack and providing a reason their school should win. Participants are also encouraged to include photos or videos to prove their case. One winner will be selected at the beginning of September.

The grand prize includes 10 Acer Windows Mixed Reality headsets and 10 Acer Aspire 7 laptop computers, which will be sent to the winning school via Acer Education’s team. Here are the terms and conditions for this promotion.

“In” and “Out” of Mixed Reality: Taking Kids to the Set of Star Wars

When I'm teaching digital film this fall, I'll have my students don mixed reality headsets to watch the shooting of Star Wars: The Last Jedi in 360 from the comfort of our classroom. Now some might wonder why the making the film would be so interesting.

Well, unlike a normal “making of” documentary that shows how a scene was shot, in this 360 video, my students can turn around and see the director, the sound engineer, the lighting crew, and many others crouching in the corners or hiding in the building. New digital filmmakers don't really understand the production process yet. They picture a director sitting in a chair saying “action” and “cut” while the rest of the crew stands there on the set. But now they'll understand that sometimes everyone behind the camera is really just trying to get out of the way.

Actually, when you take off the headset, it's almost like you're physically returning to a life you left behind. I noticed this feeling of being in a different place as I talked to my family the day after my first adventure with the headset. I said to them,

“In” and “out” — that’s how real it seems. In fact, one of my own questions is: Once I get students into mixed reality, how do I get them out? It almost feels intrusive to have someone tap on your shoulder to get your attention. It’s like the maze of the Minotaur, where you need to put a string on someone’s toe and pull it so they’ll know how to get out. It's that immersive.

360 Videos Are My Favorite Aspect of Windows Mixed Reality: Experiencing the Experience

360 video has me most excited for what is becoming possible in my own classroom. YouTube has been 360 for a while, so you can pull up lots of 360 videos. As shown in the graphic below, just click “filter” in the upper right, set for 360 videos, and suddenly you have a wealth of immersive VR experiences that your students can join. 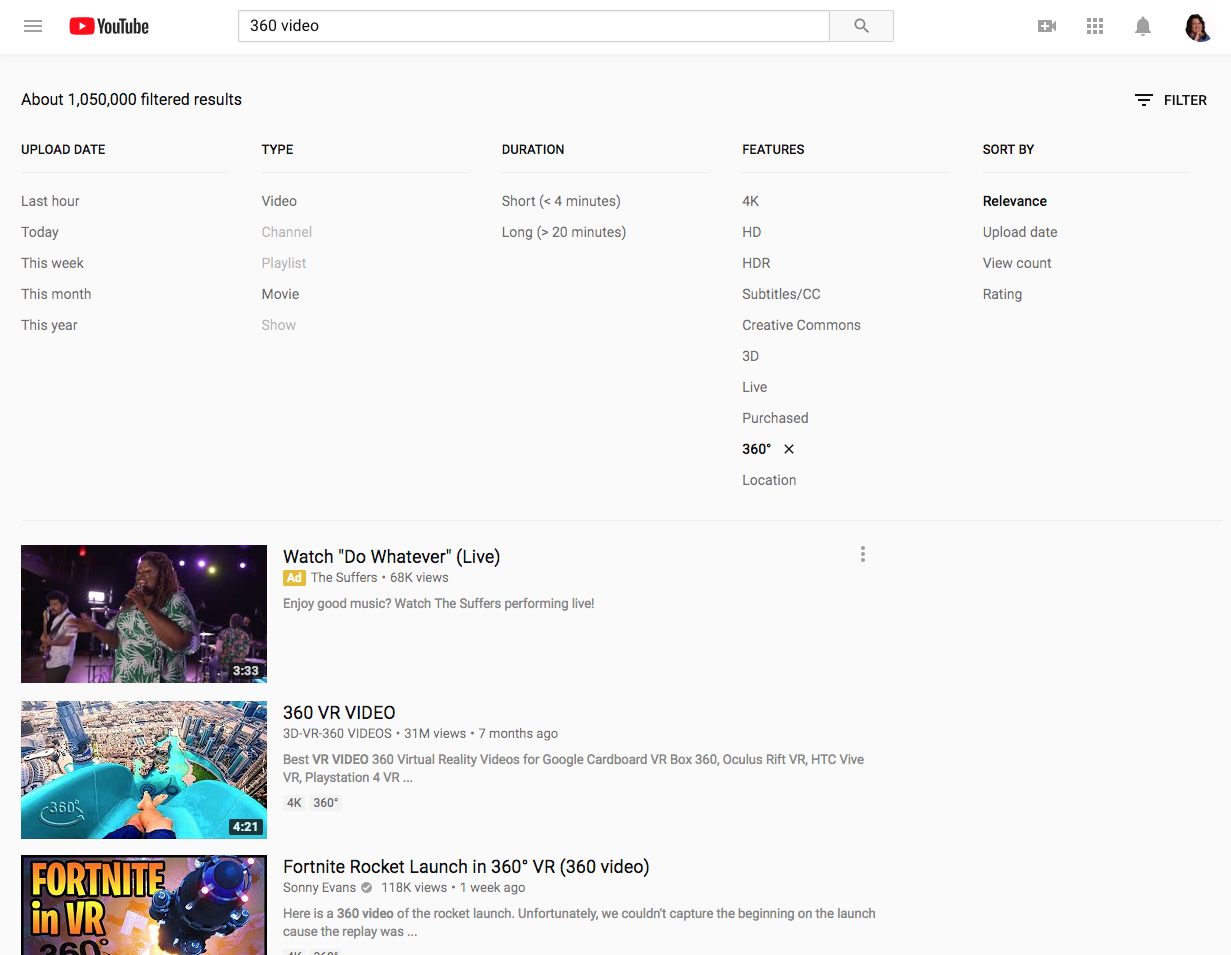 Let’s focus on the Acer Windows Mixed Reality Headset. I think the greatest thing about this headset is that it doesn’t get in the way. I stopped feeling like it was on my face or head once I got it adjusted in the back. It was really just me and the experience. I didn't even feel like I was looking into another world — as far as I could tell, I was actually there.

For example, as shown in the video above, I viewed a 360 video someone shot in China. I had to pinch myself. The opening scene made me feel like I was there. Now, you might think it would be easy to say I felt like I was there because I had nothing to compare the video to, but you’d be wrong. You see, I’ve been to China. And the first scene transported me back. The other scenes made me feel like I was exploring new places that I'd missed on my first visit. It was hard to take my students to China, but now, they can travel using a headset. While it isn’t the exact same thing, it is pretty eye-opening.

Notice, I'm talking about the experience, not about the equipment. And I think that the most exciting thing is that a great mixed reality or virtual reality headset doesn't get in the way of the experience. You're not fiddling with it to keep it on your head. You're in the experience.

Now, you might wonder how to set up the Acer Windows Mixed Reality Headset. After plugging in the headset, make sure you’ve chosen the right system settings to run it. You’ll probably need to update the Mixed Reality Operating System plug-in from Microsoft. You might even want to add the Mixed Reality tools while in regular PC mode. I prefer adding apps while I'm using the headset, but you can also add them beforehand.

For example, in the video below, you can see that I added a hologram app into the Mixed Reality “virtual home.” As you watch, you’ll see that I had a penguin skating and also gave myself a pet from the hologram app.

You might be thinking, “Oh, how cute,” or “This is for amusement only.” But imagine if you used this tool to build your own classroom and pick a mentor for the week. Why couldn’t your mentor be Einstein? Or if not Einstein, then some other AI being to converse with your students about physics?

Say you're teaching about Shakespeare. Imagine an AI Shakespeare always ready for a conversation or a trip to 16th-century England or the places where his plays were set.

Now, I'm not saying we’ll stop needing real teachers, because the world will always need teachers. However, I do believe that the right tools can be valuable additions to what teachers already do. We can bring Google Cardboard and our mobile phones into our classrooms (which I’ve certainly done, and it’s been very useful), but virtual reality is so much more. It’s a tool that I believe every school should provide for its students. The less likely it is that a student will be able to travel the world, the more useful virtual reality can be.

Tips for Setting Up Your Acer Windows Mixed Reality Headset

Here are a few practical tips that you should know.

Choose your interaction method. For example, when you launch the system, you can choose a method in mixed reality that allows students to both stand and sit.

Trace the area. When you select the area where you will walk around, you will hold the headset in your hand as you walk the perimeter of your area. If you have more than one headset, make sure the areas don’t overlap.

Also, look at vertical clearance. My 6’4” son didn’t think about the fact that we have a ceiling fan in the middle of the den. While mixed reality shows the border drawn in the setup described previously, it doesn’t show an upper border or how high your space is, so I had to turn off the fan while he was doing activities with the mixed reality headset.

Use chairs that spin. Of course, the very best thing is to have a chair that allows the user to turn around completely. I would probably have to do that for a whole classroom of mixed reality headsets. Also realize that the headset is tethered to the laptop, so each device needs a laptop or a desktop with power and room for the generously long USB cord.

I think this is just the beginning. Now is a good time to experience virtual reality and teaching with it. We know that we can’t bring technology into the classroom without considering the pedagogy involved. Those who’ve had experiences with Second Life and Minecraft will certainly have a head start on those who haven’t been using VR technology.

In short, I'm very excited. When I don't have the time or money for a vacation, I put on my mixed reality headset and go to the beach or the mountains. In many ways, I feel the same exhilaration as when I have done these things in real life. And while I don’t feel actual water on my skin when I jump off a cliff in 360 view, the butterflies I feel in my stomach are real.

After watching movies in 360, these possibilities excite me. Virtual reality is here, and it is accessible. And while I have tested other virtual reality headsets,  I found the Acer Windows Mixed Reality Headset to be very user-friendly and simple for anyone to use. So, check it out — it's very cool, and I will be using it in my classroom this fall.

Disclosure of Material Connection: This is a sponsored blog post. The company that sponsored it compensated me via cash payment, gift, or something else of value to include a reference to their product. Regardless, I only recommend products or services I believe will be good for my readers and are from companies I can recommend. I am disclosing this in accordance with the Federal Trade Commission’s 16 CFR, Part 255: “Guides Concerning the Use of Endorsements and Testimonials in Advertising.”

All Posts »
PrevPrevious5 Creative “Googley” Tech Tools to Get Kids Creating
NextMotivating Kids to Read and Write: Sparks in the DarkNext