This morning, I couldn’t find my PC for a bit, but I wasn’t really worried because I have a new workflow. Oh, but I sat down to work the “new way” (See the picture below) and I saw my PC underneath a book on the end table by the couch where I’d left it four days a go. So I booted it up to send out one webinar invoice from Quickbooks. 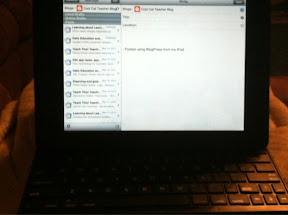 That was 10 minutes a go, the machine is downloading updates and not responding, so I decided to snap a picture with my iphone of what it was doing. 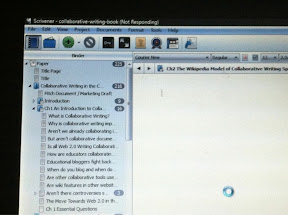 Since, I’m typing this post on my ipad, I clicked to get the photos which sync on icCoud. It usually works, but today it didn’t, so I just went into dropbox to upload the pictures. 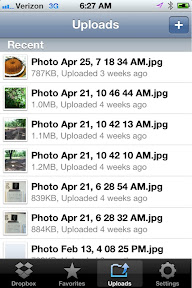 Then, I went into Dropbox on my ipad and downloaded those same photos. 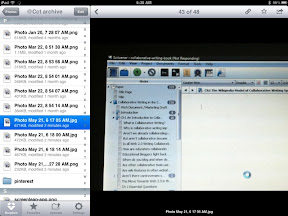 Now, I have the photos I need as taken on my camera in my blog post and I’m still able to type comfortably.

What did I use to do this?

The top picture I showed was my ipad and the Kensington keyboard (Kensington Apple iPad 2 KeyFolio Pro Performance Case) my husband, Kip, gave me for Mother’s Day. This keyboard makes my iPad feel like a PC. I don’t use the mouse because I use my fingers and the screen rotates either way for those apps like Tumblr and Buffer that don’t have a good version for the iPad that swaps from portrait to landscape.

The form factor of my computing has changed. Meanwhile, I am ready to interact with my TV, and, as I mentioned on my blog last week, the best interface for doing that is the Kinect Operating system on my son’s Xbox 360.

Finally, I had to just force my PC to shut down because there was nothing I could do– it looks like it was updating another Windows Update. Even though I keep my computer updated, when one of those comes down the pipe, I can pretty much interrupt what I’m doing. The way I update my iPad just makes so much more sense – I see the note that it wants an update, and I do it when there is time.

I write this blog post in the flow of working to make a point that my workflow has changed dramatically. Now, if I have something I HAVE to do on a PC, I tend to use Splashtop streamer to remote into the PC and do whatever I have to do. I’ve been pondering getting a Mac and may still do it at some point, but at least 85% of what I want to do can be done right here on my ipad. The form factor of this keyboard makes it so much like a regular keyboard that the pesky typos that happen when I type on the ipad screen are not as frequent.

Yesterday, coming home in the car from church, I turned on my iPhone’s hot spot, connected my ipad, and used the PowerTeacher app to update grades and respond to emails.

The keyboard makes the difference.

I think it is a combination of having an iPhone, iPad, and a drop dead incredible keyboard that makes this work for me. (As well as some awesome apps.) I can’t stress enough the keyboard part. This is my third keyboard. The first keyboard was too small for my hands and had the apostrophe in the wrong place, the second keyboard wasn’t firm enough to have in my lap.

Update. I finished this post on my PC in the office because the Zemanta plug in I use is just too easy and too powerful. I draft most of my posts now on my ipad and then polish up here in a few minutes.

Now, you have a post and a glimpse into the workflow of a fellow blogger. Hope the “over the shoulder” helps you see if you can improve your own productivity.

Posted using BlogPress from my iPad

Share | Tweet | Share | Pin It | email
Categories: iPads, Productivity
Disclosure of Material Connection: Some of the links in the post above are “affiliate links.” This means if you click on the link and purchase the item, I will receive an affiliate commission. Regardless, I only recommend products or services I use personally and believe will add value to my readers. I am disclosing this in accordance with the Federal Trade Commission’s 16 CFR, Part 255: “Guides Concerning the Use of Endorsements and Testimonials in Advertising.”