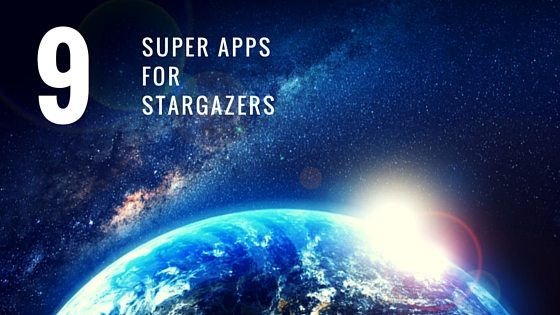 “The sky is the daily bread of the eyes.” Ralph Waldo Emerson

One of the most beautiful things about living in the country is being able to see all the stars. You can enjoy the sky even more when you ‘ve got the right apps. Here are 9 super apps to share with stargazers everywhere.

Augmented Stargazing is looking at the stars through a cell phone as the phone overlays constellations, stars, planets, satellites and more. Most require GPS and cellular data to work and many are quite large apps.

This is my favorite star app. I love pulling this app out at night when traveling.

A star track and time lapse to show you where everything will move later in the night.

This app also lets you know when the forecast is for clear skies.

For Serious Stargazers. The upgraded versions of this app will control special wired or wired telescopes as they focus on the stars or events you’re trying to watch. You can see the night sky backwards or forwards a million years. The app also gets you a subscription to Sky Magazine.

All three software programs give you the option to create overlays of planets, stars, satellites and more from anywhere in the world. Use a projector and shine the sky on the ceiling to make your own planetarium.

Stellarium is a free app that you can download onto your computer. A favorite with kids.

Google Sky is a browser-based search engine that lets you search the sky. You can also use Google Earth and travel into other galaxies.

This app is a powerhouse largely because of the academic databases that they used to create it. It also has set up instructions for creating your own planetarium using a projector and inexpensive building supplies.

[callout]We need to raise a generation of kids whose dreams aren’t earthbound and here’s one way to start. When we go back into space, it won’t be an app, it will be us.[/callout]