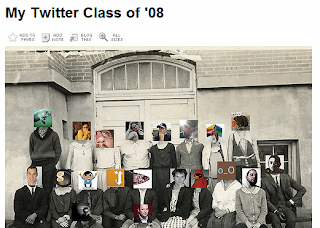 I've used twitter tools of all kinds, but these are the five that have gone the distance with me.
1) TweetDeck
Tweet deck is my favorite way to interface with twitter.
It is easy to friend and follow, but it has a handy “search” tool and I can see every tweet that mentions the world “teach.”
This helps me find people, see opinions about teachers, and see those people across all professions who love to teach others.  I find friends this way and people I want to follow. 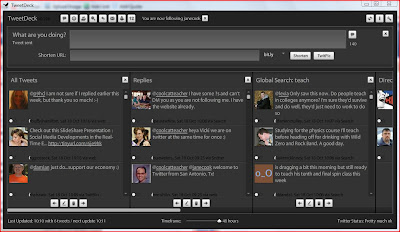 2) Strawpoll
This handy tool lets you create a new poll everyday or as you feel like it.  The trick is for people to learn how to reply.  They should just type your name and then one of your two selected answers along with any other thoughts they want to share.

So, in response to my poll yesterday, I could respond:

@coolcatteacher No – We try, however, I don't think everyone truly understands special needs.

The vote would be counted and the extra text added on the right since that is the “No” side.
3) Diigo
It is no secret that I love this handy tool.  We have student diigo groups for flat classroom and digiteen and the ability to have standard tags so the bookmarks can feed onto the appropriate wiki are GREAT.  See  “Digital Security and Safety” for Digiteen as an example (see Diigo tag list and then look at the bottom of the wiki.) 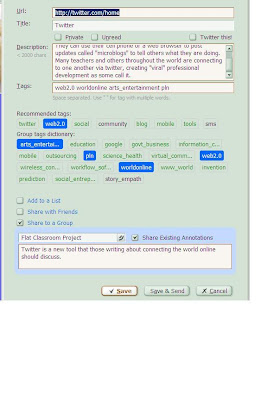 But when I save bookmarks for Diigo, I can also, check the box that says “send to twitter” and it lets me tweet directly from the bookmark.  This is very cool and saves time.
4) Less Friends
While perusing the blog post “25 incredibly Useful twitter tools and firefox plug ins,” I came across a tool called “less friends” – this helps you find and figure out who is following you and who is not.  My list is still ridiculous, but this helps me figure it all out, as the twitter method of friending is quite inefficient.
I still pretty much hold true to one rule, if people take time to reply to me and converse, then I check and make sure that I'm following them.  It is about conversation for me.  I want to learn from others and talk.  But I don't have hard and fast rules, if I like someone and they don't follow me, I'm not going to delete them.  They may be like me and only look at the friend on twitter thing about every three months.  Even with Less Friends, it is going to take a LONG time to get through the list but it is a great tool.
5) Twitterfeed
This lets me send things like my blog or podcast recordings directly into twitter within moments of posting.  This is great for me, because when I'm busiest is often when I have my own personal epiphanies, so I record those on my cell phone, send them to gcast, and them bam – they are sent to twitter via twitterfeed. 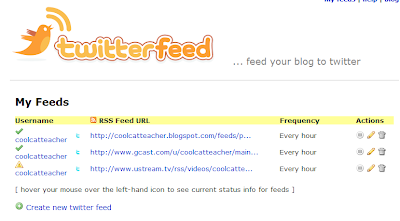 The Customized Search Engine of People
Twitter is like  a customized search engine of people.  It is very useful, especially if you use it efficiently and don't just drone the hours away looking at tweets.
I forever became “sold” on twitter about three weeks a go when I tweeted a lament about the 3 1/2 hours we were spending with my first grader over spelling.  We had used EVERY strategy that traditionally works and were still upset with only a 76 to show from the prior week's struggle.  A friend tweeted “Have you tried spelling city?”  So, I did.
And the results are astounding.  My son makes all A's on spelling tests now and although he still spends about an hour a week on spelling city and about 30 minutes with me, he's happier, I'm happier, and my husband is happier.
Kip (my husband) leaned over to me the other day in the den and said,

“All this technology stuff has been pretty good, but that twitter thing has just made our life better.”

And that, my friends, sums it up.
Technorati Tags: twitter, technology, tools, innovation, time management, life management
Credits
Twitter Class of 08 – http://flickr.com/photos/mallix/2586969604/
All other graphics are screen captures.
This work is licensed under a
Creative Commons Attribution-Noncommercial-Share Alike 3.0 United States License.

Enjoyed this post. Will give lots of your ideas a try! Thanks!