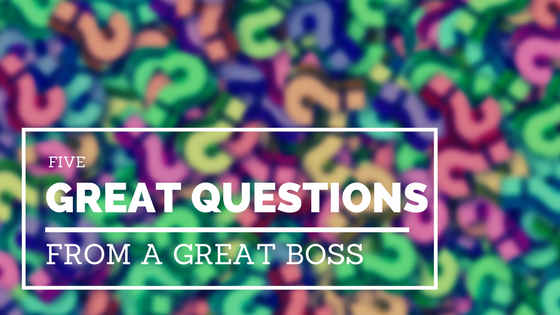 Kip and I were talking about the best bosses we've ever had. Kip shared something that one of his, Mr. Joe Morris Palmer, president and founder of an engineering company, did that really brought out the best in him.

Kip said that every day he was in town, Mr. Joe Morris would come by his desk and ask the following five questions:

(Note to grammarians, these are the questions, forgive the prepositions at the end of sentences and go with it!)

Kip said that this amazing man always started with him as a person. Every day, Kip knew that Mr. Joe Morris cared. And because he asked it every day, it would be shorter and shorter every day unless there was something big. Kip knew that as a person, he was important to the president of the company.

2. What are you working on?

Then, they discussed Kip's current projects. Kip would share what he was doing and could ask any questions.

Rather than being to do list items, Kip says he was always looking for a coachable moment with this question. When Kip stated problems or issues, Mr. Joe Morris would tell him who to talk to, mention resources, or point to jobs that had been done before that he could review. It was rare that Mr. Joe Morris left with a to do item on his own list because he showed Kip how to get answers, where to go, or answered a question on the spot.

4. Is anything holding you back?

Again, he was looking for a coachable moment. If the person was a City Manager or politician, again, Joe Morris would tell Kip who to call or give him tips on dealing with that person. If it was a frustration of some kind, then he would coach there too. It was all coaching.

Finally, he would end with focusing on Kip again. If Kip was hoping to take him to lunch, Kip would ask. If Kip needed to ask for a time to go to school function in the next few weeks, he could mention that.

How long did this take?

Kip said that this rarely took more than 10 minutes. It was quick, it was efficient, but it was a game-changing moment every day or so.

Now, this CEO had quite a few engineers and I'm not sure if he had to spend that long with every one but he definitely did with the new ones. Tragically, Mr. Joe Morris died in a car wreck after Kip had been at his company just a few years. He and Mrs. Jean were truly treasured friends and family members and the world was a sadder place when we lost them.

But Mr. Joe Morris' legacy of masterful leadership lives on in our lives.

What can we learn from this?

If we're working with people, it is important to connect. In Kip's last job, he had more than 30 direct reports and couldn't have this 10 minute conversation every day. Now, he has less and tries to do it every two days since his employees are spread throughout a large property.

I work hard to apply this with my students. If I see a student struggling, first I ask how they are. Then, we get down to business.

You have to relate before you educate.

You have to relate before you innovate.

You have to relate before you collaborate.

This post is day 48 of 80 days of excellence. I've created an email list below for those of you want to be emailed the full posts written as part of this series.

All Posts »
PrevPreviousDreams Are Your Precious Treasure
NextSuccess Secrets: Avoid Fake Elvis Syndrome and Dare to Be OriginalNext