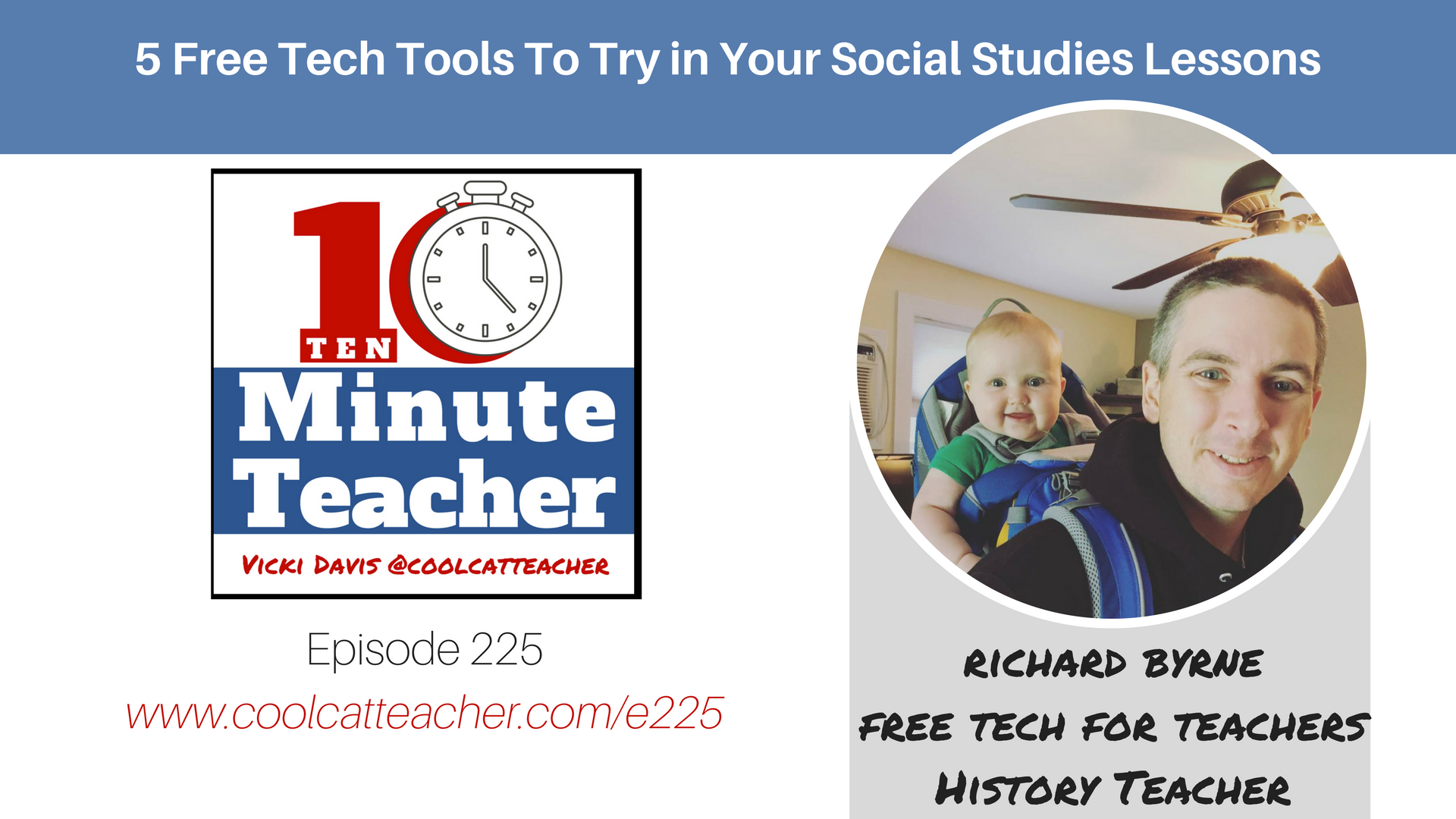 5 Free Tech Tools to Try in Your Social Studies Lessons

Richard Byrne, author of Free Technology for Teachers, was a history teacher. It shows. In today’s show, he talks about top free tech tools to try in social studies lessons. This is one to share with your history department.

5 Free Tech Tools to Try in Your Social Studies Lessons 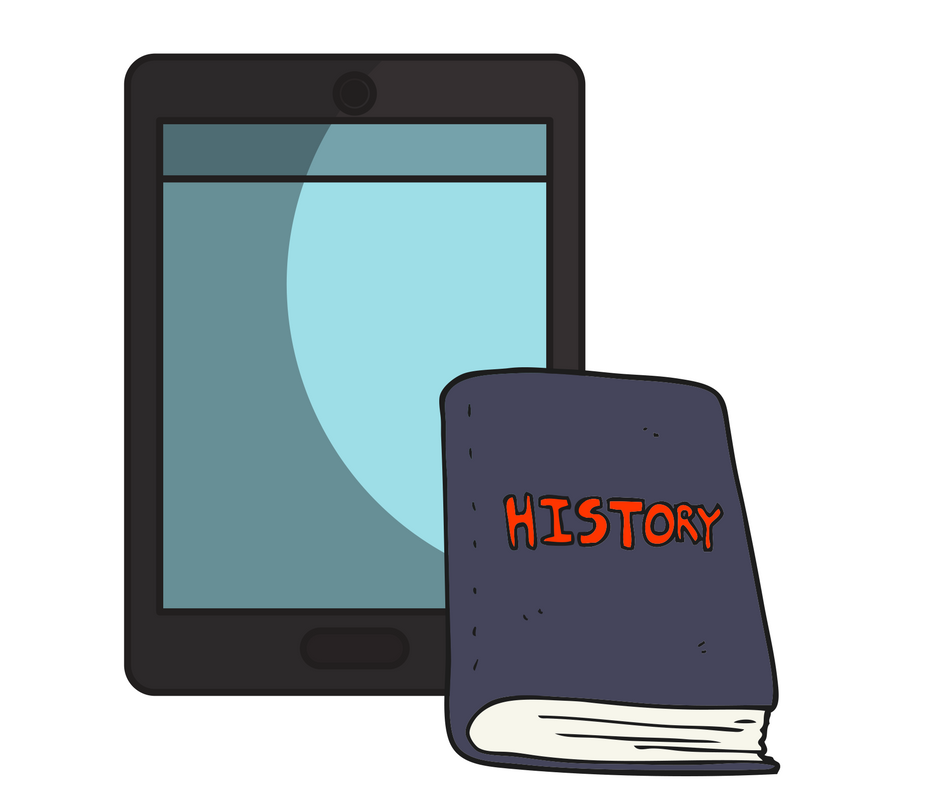 Vicki: Today we have with us one of my favorite people, Richard Byrne @rmbyrne.

Now, I will include a link in the show notes and in the pre- and post-roll for this podcast episode to an amazing teaching history course that Richard does have, as well as some other courses that he has online that you may want to join in.

So Richard, where do we start?

Richard: Well, where do we start?

Richard’s Background as a History Teacher

A little bit about my background, I think, for folks who don’t know me. I taught high school social studies for the better part of ten years, and also worked in special education for a little bit.

So I want to share a few of my favorite tools that I think… Some folks might be familiar with, and some people might be brand new to them.

So, if you don’t mind, I’ll just jump right into my first one. What do you think?

Richard: So this is one that’s right under everyone’s nose when ever they go to Google, but whenever I share it, people are like, “Oh! I didn’t know you could do that.”

Now, there’s two versions of Google Books. There’s Google Books where you can go and buy a book.

But I’m talking about the research tool for Google Books that gives you access to millions of titles that are in the public domain. For a social studies teacher, a history teacher, who needs to give his or her student a little more access to historical articles and books, that’s a great resource. You can clip sections out of the public domain books, using the tools that are built right in to Google Books. I used to make “bookshelves” in Google Books for all my students.

So I’d go to Google Books, I’d make a bookshelf and I’d say, “Hey kids, here ya go. Here’s a whole bunch of resources that are public domain. You can look at them, read them online, and print them out if you want to print them.

So that’s one. And, as I said, it’s right under your nose. Just go to https://books.google.com/ and you can start using it.

Vicki: Yeah! And it’s so much easier now to read those books.

Vicki: They’re in a more readable format, than back when you were using it, right?

Richard: Yeah. When I first started using it, you had to read it on your computer in your web browser. Now there’s an eBook option. Of course there’s a PDF download option. There’s many ways to read it that doesn’t require you to sit at your laptop or sit at your Chromebook and stare at the screen the whole day.

So that’s a really neat tool.

Another one that is kind of an update on I would say the standard play in the social studies teachers’ playbook — and that’s the timeline project, right?

I think, going back since the dawn of time, people have been making timelines, right? TimelineJS which a free tool that your students can use, and you can use to make a multimedia timeline. The reason that I really like it?

It can be a collaborative tool. The way you build a timeline is you actually make a spreadsheet, and you just input into the spreadsheet template in TimelineJS a link to a YouTube video.

And it’s also not restricted to AD/BC format. You could use CE/BCE, you know. It’s a very very flexible tool.

So I really like Timeline JS. And if you want to see an example of it, CNN even uses it to make some of their multimedia timelines.

So it’s a really neat tool. Free tool. Check it out.

Something that’s new… and I’m really excited about. I think the entire internet is excited about right now… is Augmented Reality and Virtual Reality. Right?

You know, those technologies have been around for a really long time — a couple of decades they’ve been available — but now they’re much more accessible than ever before.

One of the services that I’m really excited about is a service called Metaverse.

Richard: Yeah, Metaverse Studio… The way that I’ve been describing it for the last six months or so is, like, it’s build your own Pokemon Go, but with an academic slant. Right?

So when I think about using Metaverse Studio in the social studies classroom, I often think about, “Could you make a historical Pokemon Go for your local community?”

Have your students build their own. Augmented Reality game in which the players go out. They look for landmarks in town, or in your county. When they get to that landmark, they get a little digital prize. And they can watch a video about that place, or they can learn more information about that place.

One of the things that those folks are doing at Metaverse Studio is they’re really trying to support teachers as much as possible. They have a fantastic Facebook page for teachers, that I’d encourage you to check out if you have a chance.

Richard: It sounds like you’ve been using it, too, Vicki!

Vicki: My students started programming in Augmented Reality in November. And I’ve done some work for Metaverse, and I’ll disclose that. But I love it. It’s just fantastic, and there’s all kinds of potential.

Plus, there’s even some pre-packaged stuff that other teachers have created that you can play. But you know, the whole goal, as you and I often talk about, is to get the kids creating. So, love that.

OK, what’s your next?

Richard: I’m going to go out of order from my notes, because of what you just said.

So, speaking of creating…

Richard: … when it comes to Virtual Reality, you know it’s great to sit back and take kids on a Google Expedition, which was going to be one of the things I was going to talk about anyway. Google Expeditions is great. You can show kids places that can’t be displayed in a 2D format. You know, a flat map is great, but going and looking at it in Google Expeditions? That’s a whole nother experience. Right?

And I’ll give you an example of how I’ve seen it used by a school. I visited a school in New Hampshire last summer, where the teacher had decided that for part of his geology unit, actually, he was going to have the kids go out with that app and record some 360 panoramas and talk about some geologic physical features. So there’s a little extension outside of your social studies class, with the Google Cardboard Camera app.

So those are the five great tools that I think any social studies teacher should try out in 2018 if you haven’t tried them yet.

I could go on for days, as you know, about tools that are free and available with cool features. But I think those five, if you’re a social studies teacher who is looking to infuse some new things this school year and the new calendar year, that’s a good place to start.

Vicki: So Richard, as we finish up, I will link to the course in the Shownotes. I am recommending your history course with technology. Tell us a little bit about the course.

Richard: So the course is “Teaching History with Technology,” and it’s really based on partly my own classroom, my own social studies lessons, and then the new things that have come out since I left the classroom on a full time basis.

We go in detail, actually through all five of the tools that I mentioned today but also many, many others. It’s not just a “how to use the tool.” I’m really trying to encourage people to think about how to use the tools, and so I include examples and suggestions every week in the course on, “Here’s how this could work in your classroom. Here’s a couple of activities that I’d recommend trying out in your classroom.”

And of course, if you have any questions about it, the way that the course is formatted you just hit, “Reply,” on any module that I send to you. I’m there to answer your questions, clarify information. I’m there to help you.

Vicki: Cool. So teachers, there’s lots of great tools out there that we can use. These are things we couldn’t even do before, and that’s the greatest use of technology is to be able to do things that we never could do — not just a substitute. To actually have new things and reinvent how we teach.

I will link, again, to the Shownotes. But thank you, Richard, and I love all your stuff. Keep it coming! 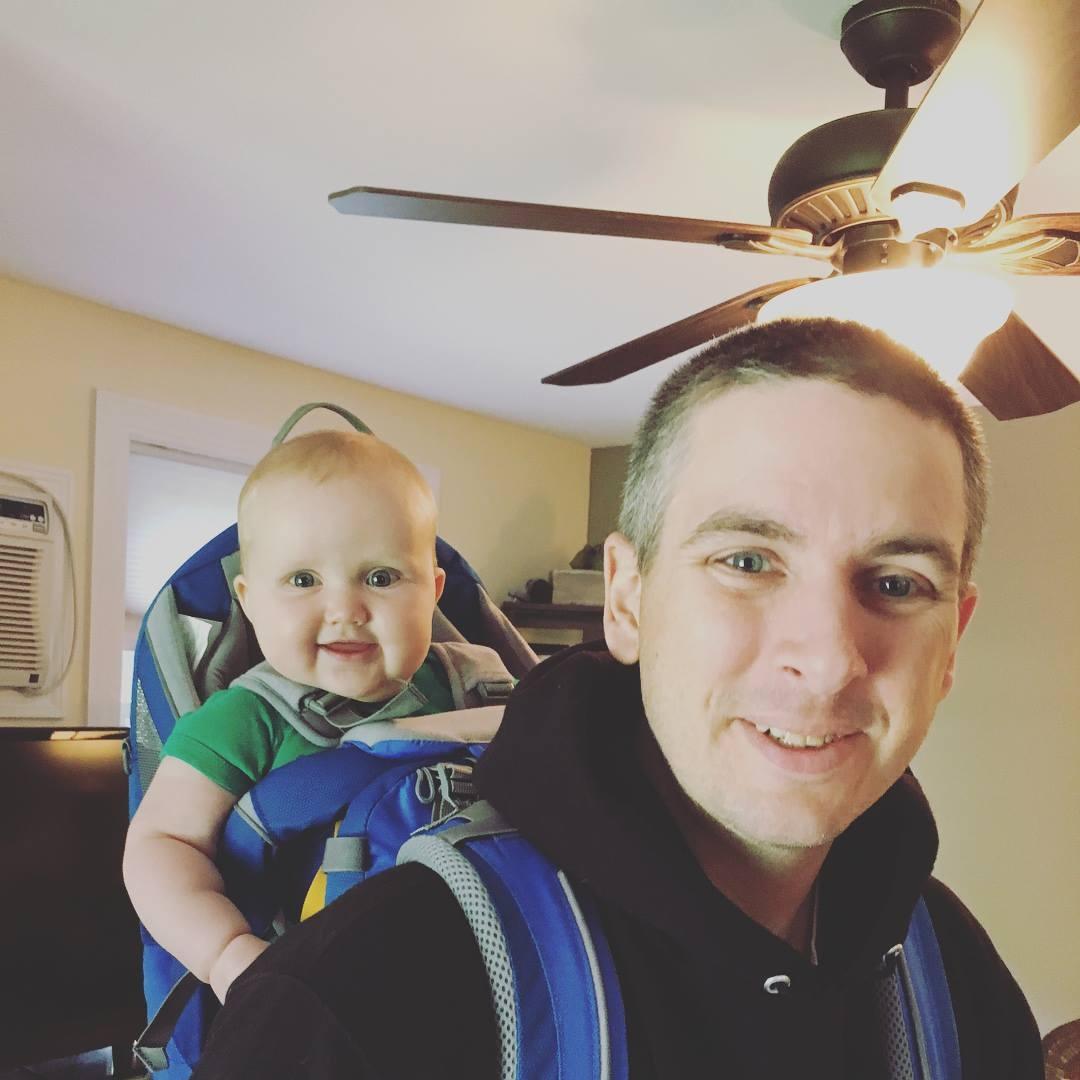 Richard Byrne is the President of Byrne Instructional Media, LLC. which manages multiple websites and training programs for teachers. Richard is a former high school social studies teacher best known for developing the award-winning blog Free Technology for Teachers. He has been invited to speak at events on six continents and would gladly speak in Antarctica too. He also provides online training and guidance for teachers and technology coaches.

All Posts »
PrevPreviousRecognizing Human Trafficking and What To Do About It in Schools
NextDon’t Chase the Cat: Determining When Interruptions Are WorthwhileNext