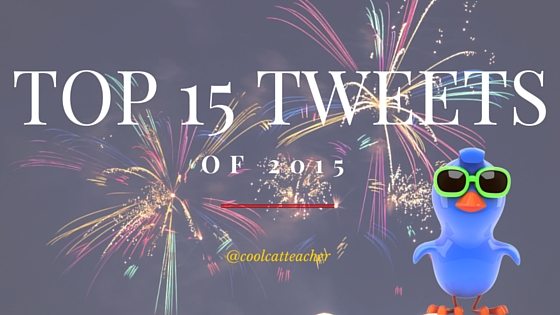 HAPPY NEW YEAR! Wow, 2015 was a big year for Twitter in education. So many new faces joined in and even more Twitter chats started up. But this was certainly the year of the SKETCHNOTE and my friend Sylvia Duckworth was queen of them. (Excited to be leading a panel with her and other star edusketchers at ISTE 2016)

I was shocked with my friend Richard Byrne came to my school and set up a Twitter account for his DOG. His DOG (who had no followers, mind you) had five lesson plans in five minutes on the Cold War using a hashtag for history teachers! (That is not ruff, that is pawesome! Pardon the puppy puns. ;-)

[callout]As I've shared before, the Twitter analytics show how many people have seen and engaged with a post. You might not be able to tell with just favorites and likes what teachers REALLY like. So check out your Twitter analytics dashboard. If you're curious, analytics only lets you see 90 days at a time, so I had to look at each quarter of the year and summarize the top tweets by hand.[/callout]

Here are the 15 top Tweets from 2015 that I tweeted from my account. I appreciate all of you who share with me on Twitter each day. Reaching 100,000 followers was really an incredible day! (Although I admit I don't feel any different. Thanks to Steve Dembo @teach42 for telling me about Twitter!)

#15 – A personal rant about grading

Teachers who “give zeroes” and refuse to let confused kids make up work really get my ire up. The replies on this tweet are worth a read. Certainly, there are some excuses for not taking late work but not all the time. I'm here to TEACH not to GRADE. Lots of talk about grading and assessment this year.

Our job is to teach, not grade. There are some who get the two confused. I tend to be merciful and redo and reteach even if it is hard on me

When you build a PLN, your win! Great graphic on PLNs by @sylviaduckworth via @danieldmccabe:#ISTE2015 pic.twitter.com/Y8toq6q3Z5

#13 Justin Tarte is an AWESOME tweeter and Ian Jukes is a great one to quote!

YOU SAID IT! MT @justintarte: The best 1:1 classroom device is … a great teacher. #iste2015 pic.twitter.com/JHWFQgoRAh

#12 – 7 Things Every Educator Needs to Know About Online Learning

This interview on Every Classroom Matters with e-learning professional Jade Ballek trended for several weeks. Sylvia Duckworth's sketchnote made it easy to understand. Thanks Lesley University for sponsoring this program!

I was excited to be a Staples Brand Ambassador for Back to School 2015. I led a Twitter chat that trended in the US for back to school. It was a lot of fun to join Staples and other bloggers in this program.

#7 – John Carver Tweeted this from ISTE

Well Said RT @johnccarver: #edchat #ISTE2015 #ISTE15 This IS the mission statement and our charge to go forward! pic.twitter.com/bqLxPX8woa

Sketchnotes were big this year!

This excellent graphic by @ASTsupportAAli made the rounds. (As I shared in the post, it took a while for me to find out that he was the source.)

Wow! We're celebrating tons of #kpawesomegirls today! Thanks @iamkidpresident for an awesome reason to celebrate! pic.twitter.com/gZWRe8zg6c

The top tweet of this year featured a sketchnote and Every Classroom Matters episode with Alec Couros. This episode was sponsored by VIF Learning Center. The show and tweets got better and better this year. (All the feedback I get from educators helps me be a better podcast host, blogger, and classroom teacher and for that I'm so grateful!)

Thank you for taking your valuable time to join me here and on Twitter. I commit to you that I'll work even harder to save you lots of time. The coolest thing about these top tweets is that they are top because so many of you shared and reshared. More than ever, social media is like a vote and what you favorite and like and reshare is IMPORTANT. We make the media for education, so make it good and helpful and noble.

Speaking of saving time, join my email list if you want to get the best of the best (and maybe even win some cool prizes.) I'm amping up my email list because I'm finding that those who read my blog via email tend to be very engaged and eager teachers. I want to nurture their energy and excitement, so join the list and stay tuned.

All Posts »
PrevPreviousThe 2015 Top Blog Posts of the Year
NextTeaching Pitfalls: Signs That You Are Out of Balance & Burning OutNext

I have to say I like the one about teaching instead of grading best!